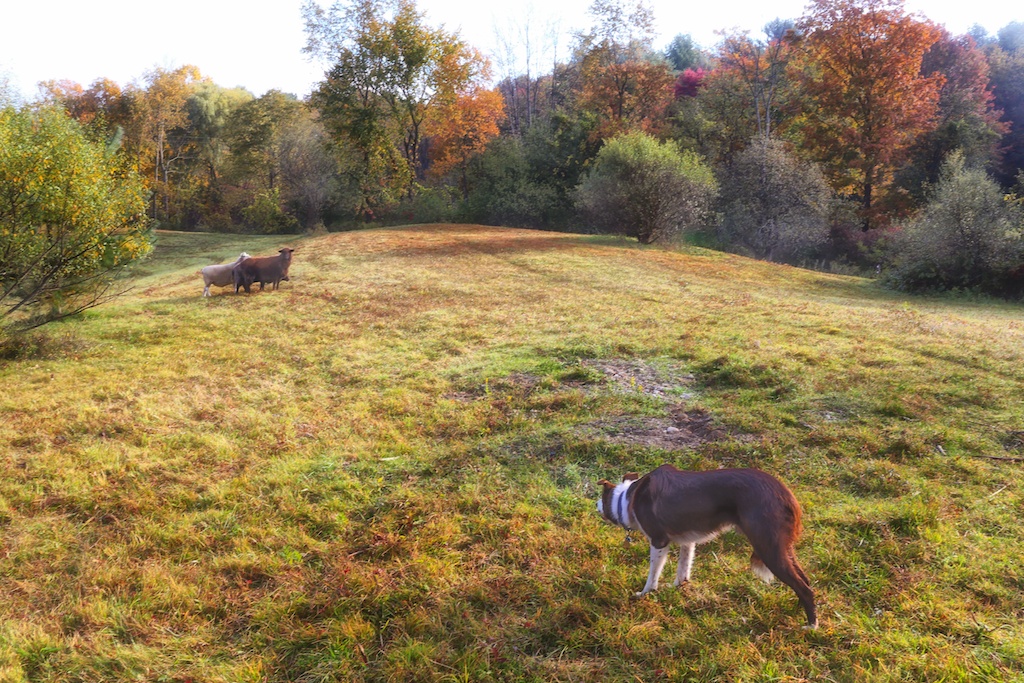 I am shocked to report that Bedlam Farm began shutting down all non-essential functions this morning. After weeks of confrontations, outruns and standoffs around the pasture, Red and the Zelda-led sheep are not able to reach any kind of agreement on who is in charge of the pastures, or who is the boss there. Zelda, an anti-herding radical,  is demanding the cancellation of all sheepherding, all sheepherding demos, all Open Houses and sales of yarn. She wants a smaller Bedlam Farm, no herding programs of any kind. Red, a sheepdog born and bred in Northern Ireland, says it is unthinkable that he will give up herding sheep on his own farm.

I’ve tried repeatedly to get them together and work something out, but Zelda says she is accountable only to the sheep, who chose her as their leader so that she would stop the dog from messing with their lives and pushing them around, and they don’t really care about the greater farm, or the Bedlam Farm brand, or the sales of books and e-books. In fact, they would be happy with a Bedlam Farm shut down. You got your wish, I told them this morning.

Three times, Zelda has knocked Red down, twice run right over him, two times led breakouts through the pasture fence and onto the road in front of the farm. So this morning, Bedlam Farm began shutting down. Although essential services – hay, water, the blog, Maria’s studio,  Facebook and photos – will remain in operation, some things will not.

Simon will not be available to cuddle visitors to the farm, nor will he bray his “call to life.”

Minnie and Flo will not chase or catch mice and rats in the barn.

The chickens will not lay eggs and crap on the back porch.

Maria will alter the messages on her message potholders.

Lenore will not eat the apples as they fall off of the apple tree and throw them up on the ground.

Frieda will not chase the trucks as they come past the house on the highway.

as he tries to have sex with them. Sex, they point out, is irrational, given that Simon is neutered.

This marks the first time Bedlam Farm has ever shut down, I have urged everyone to stay calm

and proposed that Zelda and Red get together and try and work things out. Let’s be adults, I said,

we have to try and work these things out.

Red says he will never negotiate with a sheep, Zelda says there is nothing to negotiate about.