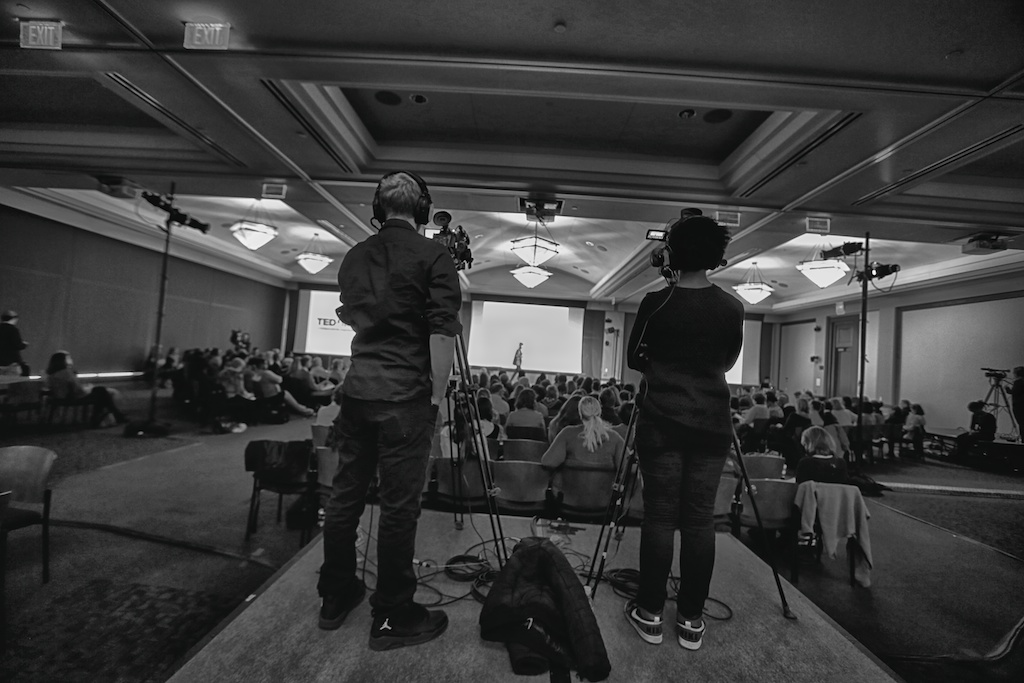 We got back from the Ted Talk this afternoon, it was, of course, a more complex emotional experience than I expected – why am I always so unprepared for my own life? The talk was in Montclair, N.J., at Montclair State University. Montclair is the hip, media-centric New Jersey town where I lived for 25 years, where I helped raised my daughter, became a writer, wrote novels, mysteries, media criticism, struggled (unsuccessfully) to fit in, got a border collie, fell in love with a farm, changed my writing life, began to deteriorate and ultimately fled to Bedlam Farm, got divorced, and started life all over.  Montclair is a great town, it is not for me any longer, northern New Jersey is an assault on the nerves, an unbroken stream of noise, people, cars, trucks, buildings, roads, noise and malls.

I had not been back there since my divorce, a transformative experience – is there any other kind? – that ended a 35-year marriage, changed my life forever, and spread much pain and suffering. I was surprised at how hard the return hit me, on Friday I felt more discomfort and yes, panic, than I have felt since the divorce itself, I got sick and distracted and worried about my Ted Talk, which was scheduled for Saturday afternoon. My symptoms were so strange – I didn’t sleep all Friday night –  I thought I had taken an overdose of insulin, but I came to see it was one of those full-blown panic attacks that used to chew me up regularly. It was just hard to be back there, where I first became attached in a different way to dogs, where I first wrote about them, where I felt the great stirrings of hope, an aching for love and spiritual change. I wanted to confront my demons, and it turned out that they confronted me and smacked up upside the head. Do not underestimate demons or over-estimate yourself.

We had a Ted Talk rehearsal Friday night, and I met the other talkers – we were all a bit nervous but supportive of each other. I had this feeling I wasn’t really prepared for a 15-minute speech that wasn’t about a book, I had never done it. What, I wondered was I doing here? And when Maria and I wondered into one of Montclar’s many super-hip restaurants for dinner- this was a Moroccan Cafe – we both looked at each and pointed out that the other was freaking out. We know the signs very well.

Saturday I worked hard to steady myself, this wasn’t a book store appearance, this was a speech in front of several hundred people that might be seen by many more. But my throat was dry and swollen, my stomach was rolling up and down, I had bouts of cold sweats. I wasn’t sure I could get through the speech.

It was, in retrospect, fascinating to see how I regressed in just a few hours to the confused and terrified – and insecure – state in which I lived for years. But I know more now, I fought back, I am not that same person, I was not about to screw up this opportunity to bring my message of encouragement and independence back to New Jersey. I meditated, took a walk with Maria, drove by my old house, polished up a 10 point “Creative Aging” manifesto I had been working on all week,  talked to myself, and when I got up on the stage, in the lights, looked down at all of those faces staring up at me, that part of me that loves the spotlight, loves to talk, loves to share my ideas just took over and it was as if another person had entered my mind and taken the wheel .I just knew what to say.

I could feel the talk was good, could see it connecting, and yet I was very surprised to see a number of people standing up and giving me a standing ovation. Some were crying. It was doubly pleasing that so many of them were young, college students it turned out, eager for a message of hope for their future. After the talk, people surrounded me to congratulate me and to ask for copies of the manifesto.

And another important thing happened, something that showed me I was in the right place for me this weekend. I met Jonne McCarron, a Ted Talk volunteer and a long-time reader of my blog, and Ted Talk scout, she e-mailed me a few months ago and asked if I might be interested in participating in Ted Talk/Montclair (Ted Talk is a non-profit foundation that looks for ideas worth sharing on radio and online.) I said no, thanks, II wasn’t. I just wasn’t really drawn to the idea. Then I thought about it (and Random House thought about it) and and I said sure, I’d be happy to. The minute I saw Jonne, I felt as if I had known her all my life, we hugged and just got one another, we became instant friends (Maria too).

I met Jonne and her daughter Megan Saturday and Maria and I went out to dinner with them both at one of my favorite restaurants, a Chinese restaurant just outside of Montclair. I doubt I would have done this even a year or so ago, I just wouldn’t have been open to it. But I knew I wanted to have dinner with Jonne, she was so real, so warm, so bright and genuine, the dinner brought me back to earth, reminded me that there are good and creative people everywhere, where you live is not nearly as important as what is inside of your head and heart. Of course, I ended up urging her to start a blog to share her poetry and knitting, she is thinking about it, I think I got to her. She had a bag full of fabrics and vintage hankies for Maria. We had so much to say to one another.

The four of us spent several hours talking and I realized how grateful I am to this person, until Saturday a stranger, who believes so strongly in my work and my blog, she pushed for me to be included,  and I have this eerie and curious feeling that she might have just changed my life.

So I am home, and glad to be  home. Montclair is a great town, it is not for me any longer, northern New Jersey is an assault on the nerves, an unbroken stream of noise, people, cars, trucks, buildings, roads and malls. I was grateful to have been there, happy to get home.

Almost everyone I met said they wished they had a farm like Bedlam Farm, yet I’ve learned that is an easy thing for people to say, but I don’t really believe it is what most people want – otherwise, they would be here.  I don’t think most of the people telling me that really want to give up the organic food stores, gyms, cafes and restaurants, hip movie theaters and quick access to the Mother Ship, New York. I don’t think most of them – this was a very fit, stylish, buff and intense crowd, nobody looked much like me  – would like a farm at all. It isn’t any more for them than New Jersey is for me. There is this idea that we can simple move out of our lives and into the one we want.

So the journey was a powerful experience for me on many levels. I did what I sent out to do, I brought my message in a place where it will be heard. I went nose to nose with a lot of pain and regret.  I confronted some demons in Montclair, I saw the ghost of myself everywhere, shopping, walking the dogs, driving my daughter around, feeling lonely and isolated there, it was never the right place for me, I was jumping out of my own skin for years, and jumping out of it again this weekend. You cannot, of course, go home again, and why would you want to try?

I loved the talk, it was kismet for me, especially the manifesto,  it just worked. It was an affirmation, I was proud of me for not quitting on it or running away. I’m glad I listened to Jonne.  I’ll put the manifesto up shortly, lots of people at the Ted Talk were asking to see it. I’m not sure I have written too many things, if any, that struck such a deep nerve in people. How lucky to be able to do that.