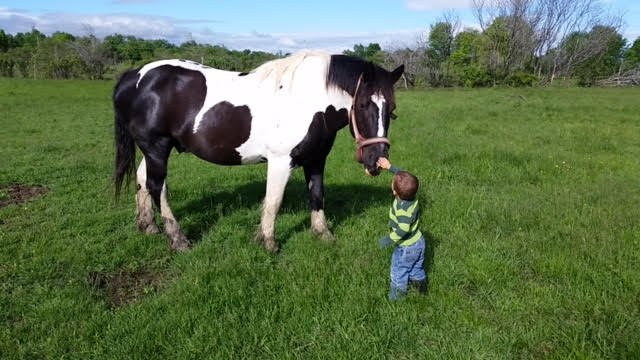 Hunter Rockwood And His Pony. Let’s Bring Them Together Again

I want to thank once more you good people who have, in two days, brought Joshua to the gates of a great victory for love, animals, freedom and truth. In less than two days, you have raised $10,000 for this young farmer, money that will enable him to get his impounded horses back and also negotiate an arrangement that will bring his ordeal to an end. It is unfortunate that he will have to pay so much money for this, or that this nightmare has cost him so much money. it seems unjust to me and so many others, but it is, in fact, a small price to pay to bring his world back together.

If it matters, each of you ought to know he could never have navigated this awful experience without you, every farmer and animal lover now knows there is help for them when their way of life is threatened. I believe in government, but government is supposed to protect honest and law-abiding people, not persecute them.

They have stumbled here.

Joshua needs less than $2,000 to achieve his gofundme goals, which are explained on his funding page. I don’t need to explain them again here.

” I hope you get your horses back, justice for you and your family,” wrote Gail Thompson-Allen, who donated $350 this morning. “I truly admire you for standing up for the true rights of animals and family farms everywhere.”

There are $5, $10 and $20 donations, from all over the country, Joshua has touched a deep nerve in his struggle for his farm, his family, his reputation and livelihood.

I believe he will get what he needs by the end of the day, a remarkable outpouring of love and community. Don’t ever let anyone tell you that people are not good, given the chance. This is our news, they can keep theirs. We don’t act out of hatred or rage, that is the province of others. We act out of community and a love of animals and a respect for the dignity and well-being of people.

Speaking of brothers and sisters, Blue Star Equiculture of Palmer, Mass. has offered to come to New York State and help bring Joshua’s horses back to him, once they are released, in their big trailer with their big and blue truck. A beautiful gesture. Community is much stranger than cruelty and anger.

I am not a religious person, but I can’t help but think, two weeks after Christmas, of my reading about Jesus Christ this year and his notion of the just one, of people who stand at the gates of a new kingdom, a kingdom of love and compassion and truth. I think of this when I think of Joshua, he is no saint and would be horrified at the suggestion, but he is a just one. He is standing up for his truth and his life, and that makes him our brother. Everyone sending him a contribution or supporting him in any other way is a brother or sister to him, as we are to one another.

The animals are calling to us for a new way of saving them and keeping them in our world, in that sense Joshua has become an unwilling and reluctant prophet. He is much admired and much supported. One more day to go, I think, and he will be where he needs to be. Thanks for your help. We are standing at the gates, about to walk through. That’s how it feels to me.