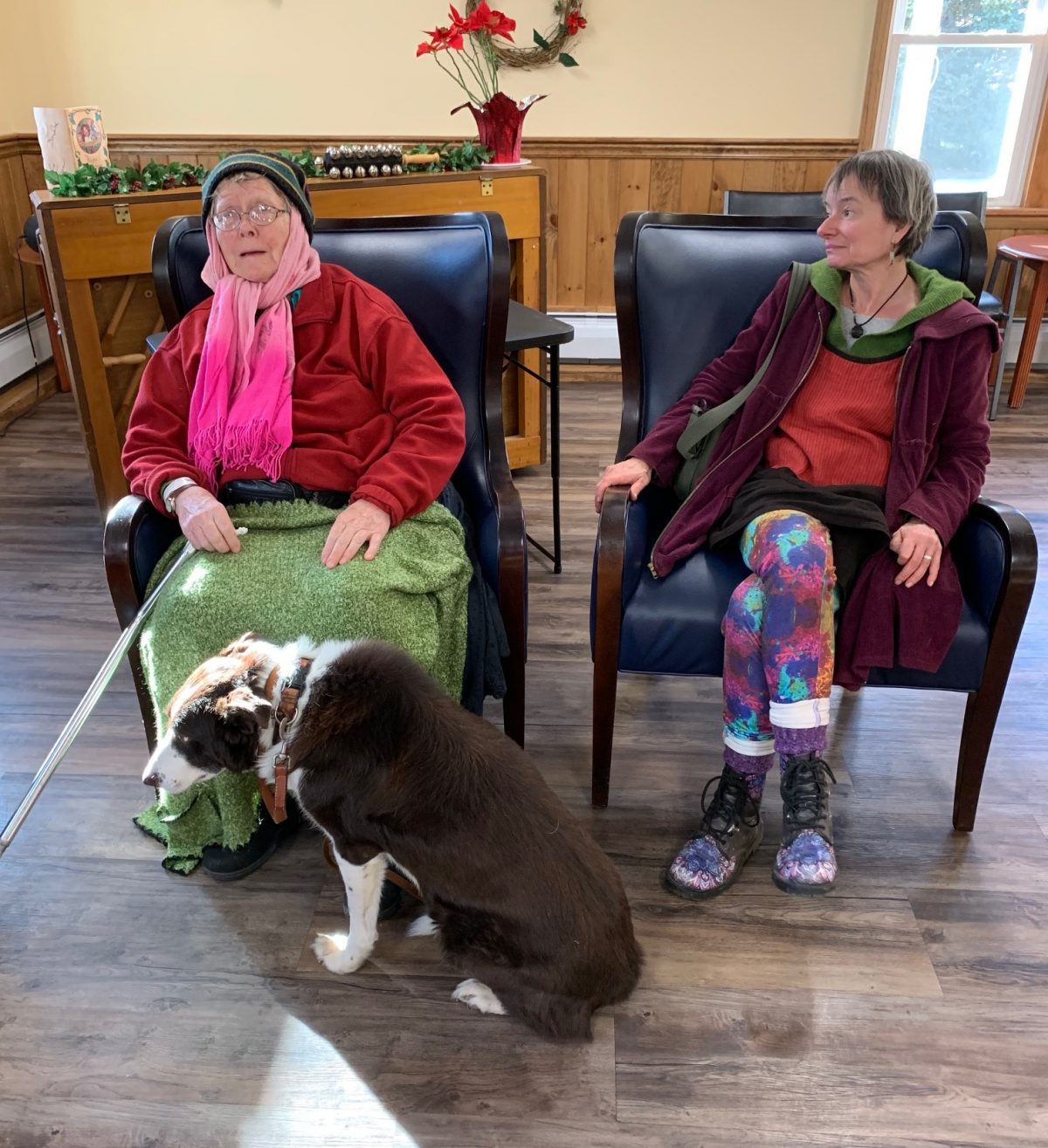 I am embarrassed to admit that Red and I don’t seem to have been banned by New York regulatory officials, at least not yet, at the Danforth Adult Care Center, where some of the Mansion refugees have been housed for more than a week.

I am mildly ashamed to say I was looking forward to Red and I getting hauled off from there, perhaps in a police van. What a blog post that would have been: “Red Arrested Doing Therapy Work.” That would go viral in a flash.

My ego was singed a bit, I guess we are not really all that important, I told Red. I think he was disappointed to, he loves attention.

As you can see from the photo, we found Sylvie holding forth in a chair in the Bingo Room, I asked her if she needed anything, and she said she needs international stamps. Who are you writing to?, I asked. “People in other countries,” she said, mysteriously. Sylvie got me this time, I’ve brought her hundreds of stamps, but no international ones.

Sylvie is regal, she is the Queen of the Mansion. She and Maria and Red had a nice talk.

When I called Maria – she was out hunting for  fabric in thrift shops – and told her there was some chance the state of New York would ban Red and me from visiting the Mansion refugees, she said, almost instantly: “Well, now we have to go, don’t we?”

Yes, I think we do, I said, just think of the photo possibilities when I get tossed out with Red. A therapy dog getting kicked out of an adult care facility? Wow. Red is a big cheese in my world, you can’t imagine the e-mail and other mail I got when he was so sick.

I must also confess that I consistently underestimate the reach of my blog. I mostly write out of my own life and head, and I just don’t really think about who is reading it where. Most of the time, I have no idea. Apparently a lot of people are reading the blog, including state officials, legislators, and everyone involved in the Mansion and its difficulties, many of them far away.

The donations coming into the Mansion residents are from just about every state in our Union – who says we are divided? – and thank you. I can’t say precisely what happened, but it seems someone in authority somewhere was reading my blog and was irked by something I wrote. Not the first time, for sure.

There was a suggestion that I had no right to visit the Mansion residents there. There were no complaints from the Danforth facility, nor from the Mansion or any residents, all of whom have given me written permission to take their photos. They always have the option to say no.

This was an official complaint, I can’t say what the grounds or motives were, I can only guess, and I don’t wish to do that.

Red and I and Maria came storming into the Danforth this afternoon, making a lot of noise with books, puzzles and paper train crafts. Instead of the sheriff telling me to get lost, I found some  bored and restless Mansion residents, they are very anxious to get home, some are quite visibly depressed and sleeping long hours. They need to get back there, as I have written every day (perhaps this is not what some people wanted to read every day.)

One of the most interesting messages I got today (no official has contacted me) was from a New York state legislator – she is also reading my blog, and she is concerned at the time it’s taking to get the residents back home. I said I was  not a politician or a contractor or social workers and none of this is up to me, or even really my business. I said she needed to talk to state regulators.

So maybe my blog did some good and helped get things moving, I will never know.

I am big on boundaries, and I have no wish to plunge into the politics of this drama. Nor is anyone asking me to.

The work at the Mansion is moving forward now.

There was no asbestos found in the Mansion and some mild mold levels that need to be addressed, which will happen on Monday. After that, there will be some more final mold tests and then a lot of new carpet. There is some renovation work in several rooms that can now be completed – ceiling tile, sheetrock and paint.

There is work to be done, but the end is in sight. There is no fixed date on the resident’s return, but they will be coming home. Maybe a week, maybe a bit longer.

It looks like Red and I are not troublesome enough to get banned, and while that is a bit of a disappointment, I was also told that our visits are important to the residents, they are used to seeing us every day. So there is a silver lining to not being banned.

They need to see us regularly, I can see that. Red is now much adored by the Danforth residents, it takes half an hour to walk him out of there.

So the return will happen, not a question of if, but when.

I’ve brought enough puzzles, crafts, giant photo books, story books animals and flowers to fill a small auditorium. It is helping occupy the aides as well as the residents, but nothing will work as well as getting back to the Mansion.

I’m not sure there is more I can do right now, other than visit daily and plan for the Homecoming Celebration, which will include music and a feast of Chinese food. Your help has been invaluable, appreciated and very important.

I got a lot of letters offering bail money if Red and I got busted. No such luck. Sigh: “Letters From Jail, Me And Red!”