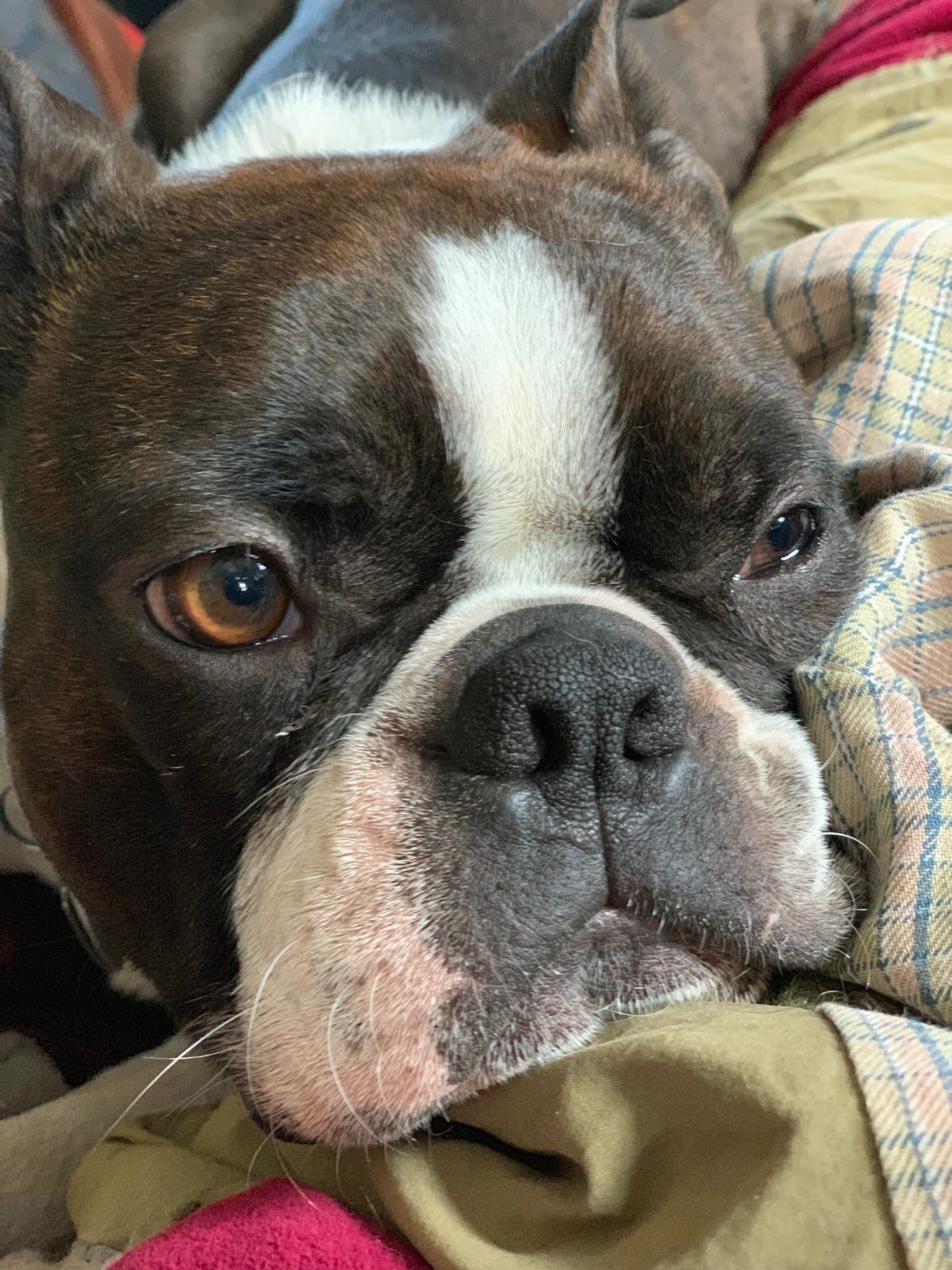 When we went out to do the morning chores, Bud got excited. He buzz-bombed the chickens, causing much outraged clucking and huffing.

He ran towards Minnie, driving her into a corner of the porch. He stuck his nose in Fate’s face while she was napping, earning some hissing and a swipe across the nose.

He ran under the pasture and gate and up to Lulu and Fanny and began barking at them. These donkeys have seen it all, Lulu looked at Bud incredulously and he backed away quickly.

He then ran to the sheep and herded them into a tight circle, pausing to go nose-to-nose with Liam and back  him up a bit. Then he started  eating donkey manure by the mouthful.

Then he ran down into the adjoining pasture and I saw  him eating what I believed were goose droppings. At each step I was calling to him, shouting at him. He always comes when called, nor has he ever harmed a chicken or cat or donkey or sheep. He just likes be a guy and wreak some havoc.

Sometimes, when there is ice on the ground and it is bitterly cold, Bud will take a dump in the house – always in the bathroom, which is gracious of him. He knows to go outside and almost always does, except when it is bitterly cold outside and icy, and he is not that kind of hardly dog like Buck in Call Of The Wild, or even Fate or Red.

He just doesn’t like the ice and prefers to use the bathroom like we do. Having Bud, I realize is like having a teenaged boy whose testosterone is rising. Except his testosterone is supposed to be declining.

Sometimes – often – he likes to eat his own poop. We’ve managed to cut back on this distinctive habit, but not eliminate it.

When we aren’t watching Bud or yelling at him or shouting “leave it”  – most days we just live him in the fenced in part of the yard – we talk about how this must be what is like to have a teenaged boy.

I never had that pleasure.  My daughter Emma was an only child (we lost two children early on in pregnancy) and she never did a thing that I remember that was even vaguely obnoxious or rebellious. She was and is much like her mother, focused, smart as hell,  talented and sensible. Blessedly, she is not much like her father.

Bud is paying me back for those peaceable years. We have come to love Bud, he is quite a character. We had no idea when he first came that he was so full of himself, or loves having so much fun at our expense.

If I had a teenaged boy, he would be like Bud.

He is very responsive to commands, but not to avoiding mischief.

He his own agenda. He does what he is told, mostly and when he feels like it. This, I am told is a common trait in terriers. Border collies are not like that.

Like  Fate, Bud is Bud. I train him when I can, love him when I can, yell at him when I must. Bud is like a big Army tank in many ways, he always pays attention, and sometimes even listens. But he goes his own way, and has his own strong idea of things.

I’ve never had a dog like Bud, but I know he belongs  here and is much adored.