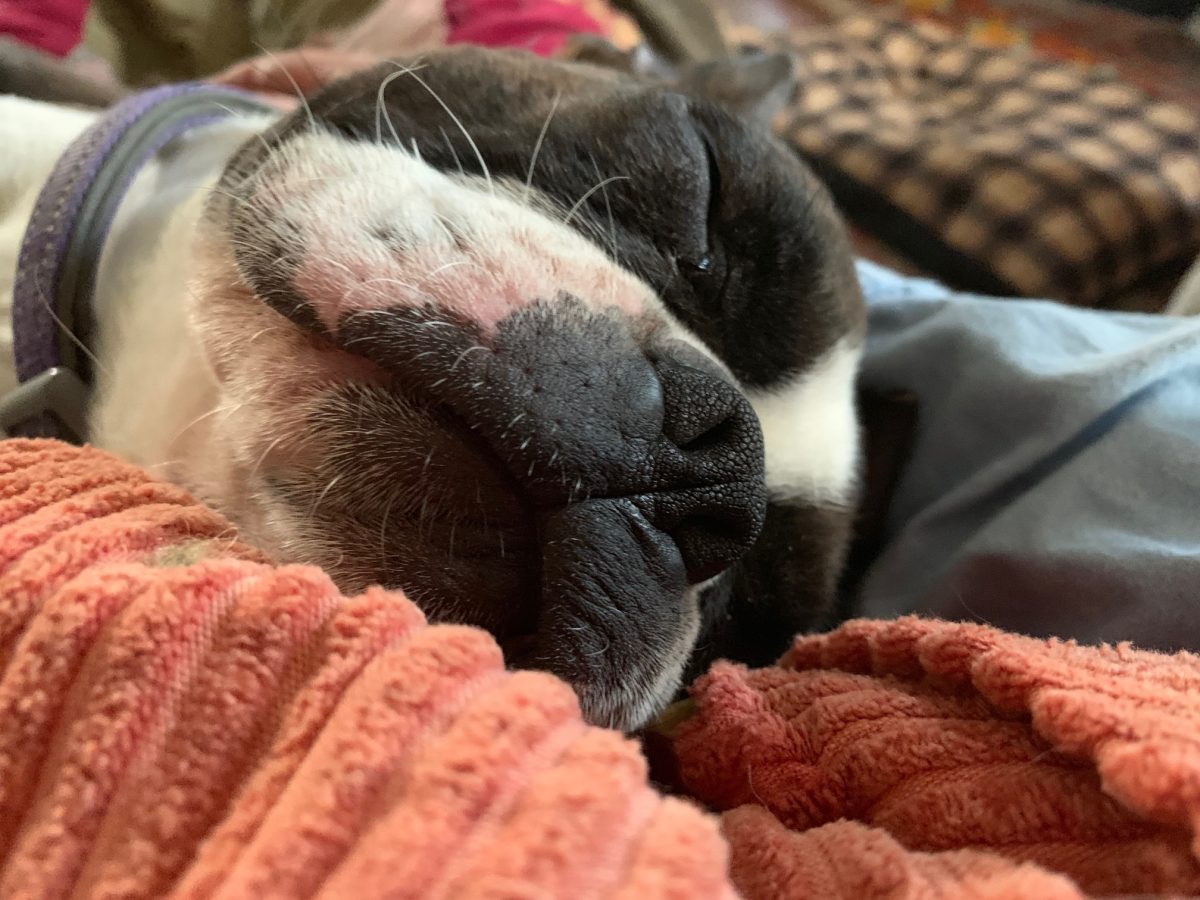 I was tired today, I woke up at 3 a.m. and couldn’t sleep, and then I drove to Bennington for my radio show, did the broadcast and drove home. My voice is giving my some problems if I talk too much or too long, I’m going to see a throat specialist in Saratoga this morning.

When I got home, I lay down to rest – I couldn’t sleep then either – and Bud hopped up on my lap, crawled up towards my head and went to sleep on my shoulder.

What, I wondered, was he thinking? Was I a warm place, a heartbeat, was it some sort of feeling for me? I’ve never had a dog do that before, or be able physically to do it. I found it peaceful, calming, spiritual, I can feel our connection deepening.

But I don’t know what Bud is feeling. Since I started my radio broadcast Talking To Animals, I’ve read and re-read at least a dozen books on dogs, emotions and consciousness. It’s a great subject for me, and I look forward to writing about it.

The big idea so far has been the biologists and behaviorists differentiation between emotions and feelings. Animal emotions, they say, can be seen – in demeanor, facial expressions, tail, eyes and movement.

Feelings must be spoken to be known, and since animals like dogs can’t speak in language, the honest biologists conceded that we simply don’t know what they are feeling beyond the emotions we can see and study.

The scientific boundary is inside/outside. We can only know what animals show us outside, what they are feeling inside is pure speculation, even though dog owners are always telling me with great certainty what their dogs are feeling all the time.

There is no evidence of any kind to suggest that dogs understand death or grieving in our human sense, or that they feel envy and jealousy the way people do. But many dog owners are certain that their dogs feel both grief and jealousy.

And they might be right. I don’t know either.

Boston Terriers are affectionate, they like to cuddle up. On a windy and chilly day, I think Bud just likes to lie next to a warm body. It looks like devotion, but that would be speculation.

I know what he is showing me on the outside, but his feelings are inside, and I can’t see or hear them. I am proud to be that rare dog owner who is happy to say quite often what the scientists say: I don’t know.

That is the mystery of dogs for me, something I love about them. They have their secrets.

Many people have told me their dogs are ashamed and regretful when they do something wrong – chew a sock, pee on the floor. Probably not, say the biologists, when a dog cowers and looked abashed, what he is really saying is “am I in trouble?” Very different.