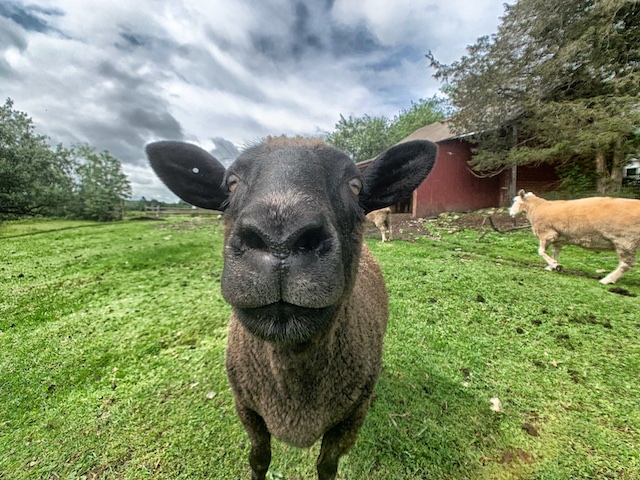 The sheep and I have been thrown together by life for nearly 15 years now. I first encountered them when I was trying to train my first border collies – Orson and Rose, out in Pennsylvania.  We have been together ever since.

I made a promise to myself when I decided to keep Orson, a border collie from Texas, that I would always have sheep as long as I  had border collies. I’ve kept that promise.

When you have border collies, it is difficult to get too close to the sheep. Whenever they see me coming it was with Red who kept telling them what to do. Sheep think border collies are wolves – the act and look like wolves – and the sheep are skittish around them.

Red had so much authority that he always watched the sheep, and never let them get too close to me. Rose was like that.  After awhile, they stopped trying.

After awhile, whenever they say me, they just bunched together and waited for trouble. Now, with Red laying back from work and keeping his distance, they are starting to get curious about me, to see if there is any way to turn me into a bigger version of Maria, who talks to them and brings treats.

Giselle in particular has taken an interest in me, she gets up real close and sniffs me and stares at me in wonder. It’s as if she is seeing me for the first time.

At first, I thought she was taking a shine to me, she is pretty imperious and independent. She kept nosing up to me as if she had something to say to me.

As she got closer, and tried to eat my camera, I realized that it was more about the camera. She is convinced there is something edible in there. I had to hiss at her to get her to back off.

Red would never have let this happen, but with his bad eyes, I doubt he could see it. I’m glad the sheep are feeling easier about me. I think I’ll bring the Iphone camera out next time.