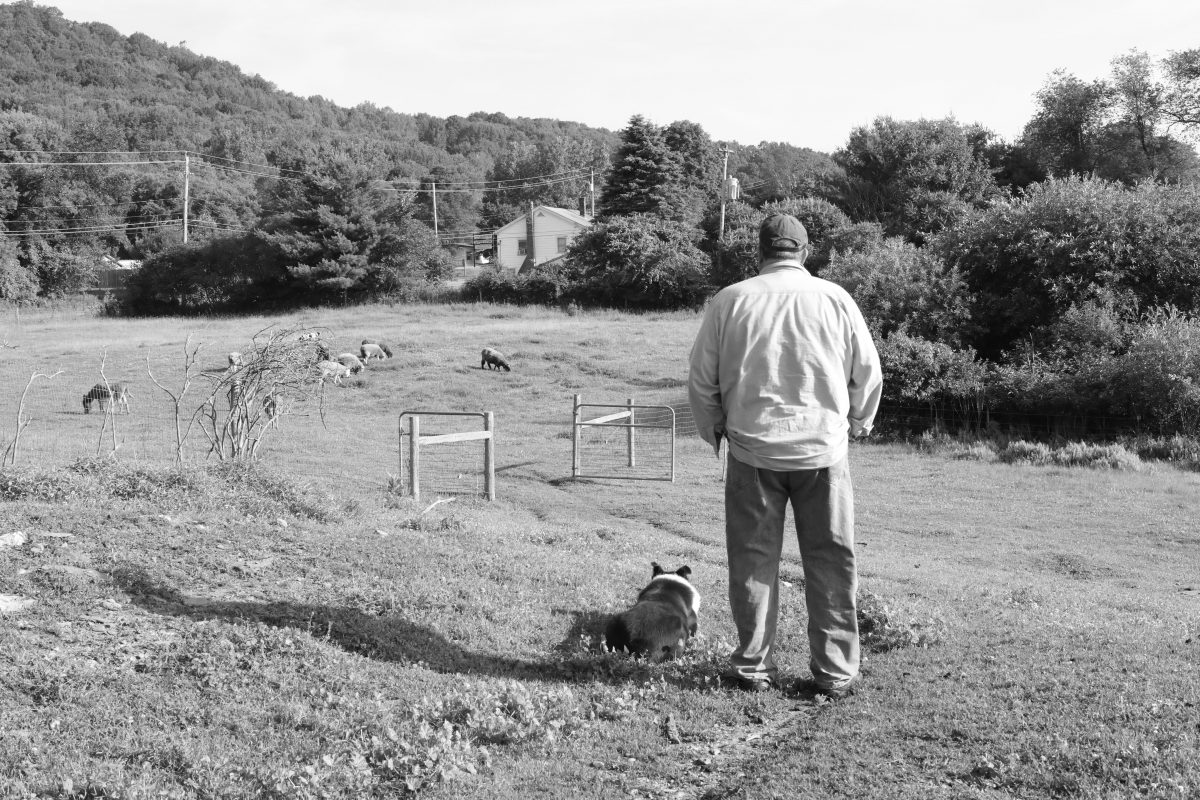 I remember this photo. Maria took it, and it was the last time  Red ever came out to the pasture, and the last time he and I worked together.

By this time, Red was something of a ghost. He couldn’t run, struggled to see the sheep but seemed very content to sit on his hill and look out over the pasture.

With his hearing and instincts, I’m sure he knew exactly where they were. That morning, I felt good standing out there with him, in silence it was our comfortable way of saying goodbye.

The previous day had been a rough one at the Mansion,  several people I knew well were gone.

it was Red’s last appearance there as well, and I could see he was just spent. He could barely stand up.  That last morning, I remember thinking how grateful I was that I could end Red’s life in a dignified and peaceful way.

He was getting disoriented and could no longer walk or run far. I didn’t want to see him deteriorate painfully and for many weeks and months. And I didn’t have to see that, it was up to me.

Nor did I hope to see him in the afterlife, or on the bridge. My wish for him to was to rest, heal and find another human and enrich his or her life. I didn’t want him to hang around me forever, I wanted him to give rebirth to himself, just as I have tried to do.

I don’t know if this happened.

I’m not a psychic or an animal communicator, I do not know if Red’s body or spirit lives or if he has turned to dust by now out in the pasture, leaving nothing behind but love and companionship.

He was a good memory dog, and all the memories were good. So here  I am, just a few months later, getting ready to bring a new dog into the farm, and my life with Maria.

I am curiously excited, I am looking forward to training this dog, socializing her and loving her.

I made it a point never to project my own wishes onto my daughter Emma when she was young.

I never told her what I thought she should do or wanted her to do. It was and is always up to her, all I want is for her to be happy and fulfilled, that is a tall order in itself. She has to do it on her own.

I want Zinnia to be a therapy dog, but that is my wish, it might not be hers. I want to be open to changing directions or – as happened with Fate – realizing that the path I chose might not or should not happen.

What I don’t want to do – to a child or a dog – is project my own needs and desires onto them. Zinnia will reveal herself soon enough, and that is the most interesting part, watching and waiting to see.

Red is a ghost now, a spirit, a shadow, an emotion. He is always there, and never there.

He always wanted the best for me, that is always the way I saw it. I think that is what the best dogs want for their humans.