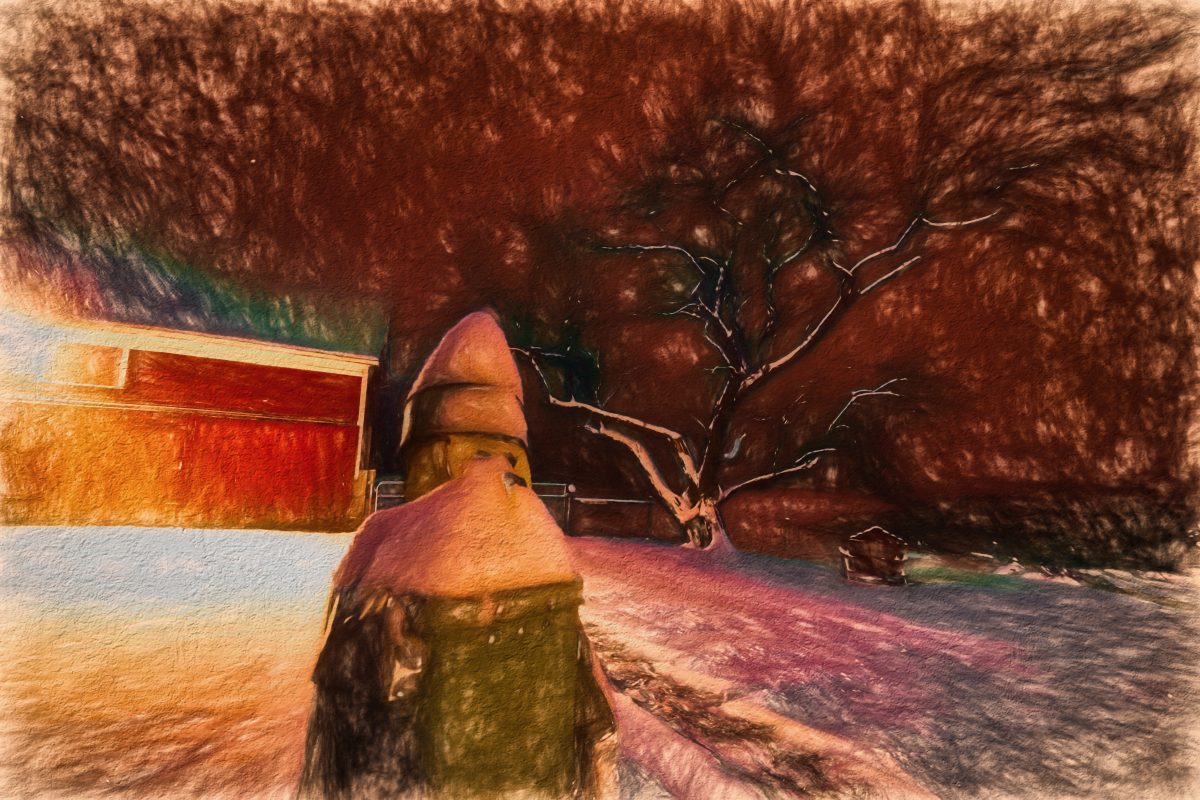 My first night on my first farm in Hebron, N.Y., there was a howling Canadian blizzard that lasted for three days and reminded me that I was in a strange place alone with no family or friends on a farm with animals in a brutal and unrelenting winter.

I had never set foot on a farm in my life before that day, never mind caring for sheep and a donkey in the winter.

I loved it all, I wrote a couple of successful books about it, my border collie Rose and I had a dramatic few years complete with lambing crises, coyotes, falls on the ice, sub-zero weather and snow four or five feet high. At times, I felt as if I was living Call Of The Wild.

I always said Rose got me through those winters, but my therapist said that was mostly bull. “You got you through it, ” she said. “You are pretty tough.”

I had to think about that.

The dog is a much better story, and I am a storyteller.

I was shocked by my winter experiences on the farm but was never once afraid of the weather, rain or shine, snow, or wind.

The first time up here, I remember being afraid was when Maria came to live with me, and every Sunday, drove her toilet bowl of a car to her job over steep hills and slick roads.

Her car wasn’t much bigger than a lawnmower, and she didn’t believe in snow tires.

Having waited all of my life to meet someone like Maria, I morphed into my mother and was suddenly terrified of her driving off in those big storms in her tiny car over dark and lonely and poorly paved country roads.

An old vein opened up.

She made it home, every time, not noticing me standing by the window staring at the road, she mostly laughed at my anxiety. She was hell-bent on showing herself and the world that she could take care of herself. She had no time for being worried about it; it annoyed her.

And she did take care of herself. I had my thing; she had her thing.

Since that time, I have experienced some real fear about the big storms that roar through.  I’m not sure what I’m afraid of exactly. We’ve had too many big storms to count in my time here, and I’ve gotten through every one of them.

If they gave a medal for getting through big storms, I’d be first in line.

The first Bedlam Farm was a never-ending series of dramas, and I got through every one of them.

My shrink and I later dredged up some childhood traumas that might explain these sudden storm fears. I don’t need to recount them here.

My open-heart surgery four years ago might explain it; that sort of marks the time when I started noticing my fear of superstorms in the winter.

I think open heart surgery made me somewhat vulnerable; everybody involved told me many times how I nearly died and could die again. And to never shovel snow.

Sometimes, I think I’m the man the politicians talk about when they urge people to stay in their homes during the storm and be safe. The trouble is, I don’t see myself as one of those people.

When they take your heart out and renovate it while you’re on life support machines, there is some heightened vulnerability for sure. Perspective changes, humility grows.

As a male, I was taught to hide my fears and vulnerability.

As a writer and therapy client, I was taught to show my fears and acknowledge my vulnerability. As most of the people reading this know, men are raised to be healthy and strong, not to be weak or nervous. It’s a tough habit to break. Just look at Washington.

I think part of my anxiety is my age; I can’t help as much as I would like to. I can’t be outside in the bitter cold for too long.

I was all alone for most of my time on the first Bedlam Farm, and I did most of everything myself when it came to running the farm. Now, I can’t do half of it by myself. I do what I can do  – shovel the porch, rake off the roof, brush off the cars. That’s a lot in a snowstorm but not half of it.

Maria does the rest.

I do sometimes stifle my worries, but we get along pretty well.  We get one another. Maria gets tired, shoveling snow time after time. That bothers me, but it’s her choice.

And she loves being outside, she loves physical work, and she loves helping someone who needs her. It isn’t just that she wants to handle a storm like this She needs to.

This weekend, as I started hearing alarms and hysteria about 22 inches of snow coming our way – judging from today, that’s what is happening – I started worrying.

Will the cars be okay? The slate roof? How will the dogs and puppy eliminate? Will the animals be dry and warm in their Pole Barn? Will, the roof hold up? Will my heart hold up, and if not, what can I do about it in a big storm like this, far from doctors or hospitals?

How will we get their hay to them and keep it dry? Can Maria and I handle all this together, especially if I am being warned all the time to be cautious, do less, rather than more?

The other night, I woke up in a near panic, and Maria sat up and asked if we could talk about it. I said sure; we always talk about these things.

“Listen,” she said, “I don’t want you to worry about this storm. I’ll take care of you.”

That sentence broke through to me; it ricocheted around in my mind. I could not remember ever hearing it before.

I am a caretaker, not a care needer.

Yet I also understood that my fear was very often irrational and neurotic, a holder over from the mental illness I have worked around much of my life.

I told Maria what I was feeling, that I was afraid and couldn’t say why I would be afraid of a storm, but I was. I guess I am just feeling more vulnerable at the moment.

In the world I grew up in, you did not ask for help, or accept it.

Help was worse than anything I needed help for. You hid your emotions and never admitted any weakness or need.  Nobody ever was to know what you were feeling, and especially how frightened you were, or ashamed.

I was chased one afternoon after school by the roving Irish gang in the neighborhood; they fanned out looking for people like me, by which I mean Jewish and alone and nerdy.

They beat me up pretty good, stole my backpack and my money, trashed my books, broke my glasses, and pushed my face into the freezing mud.

I can’t imagine what I looked like when I got home.

My father suggested I take some boxing lessons so I could fight back. It was no big deal, I said, trying to sound tough.

I doubt they will ever know how deeply their scorn burned into my consciousness. And it doesn’t matter now.

They were telling me and believed that I was a sissy, a weakling, a book worm, somebody who couldn’t fend for himself.

My encounter became a family joke for months, if not years. I was the joke.

Saying nothing was the central strategy of my life for many years. It was a far safer place.

But I have changed.

Fear is a big deal. But the idea of letting somebody take care of me went around and around in my head.

Let her in, I told myself. Let her help.  This is someone I love. Someone I trust. Someone stronger than me in a snowstorm. Take some good photos.

Take her help, love it, and be grateful for it. Walk away from the tough man thing, leave it behind.

I don’t have to hide my fears or tremors; I’m safe now. Strength is not just about helping; it is very often about asking for help and taking it.

So I had a revelation. It was time to try something new, something different.

“Thanks,” I said, “okay, I am open to your taking care of me during this storm. I will help, I will do what I can, but I will let you take care of me, I’ll admit that I need and want to know that.”

Hard words for me to say, but they sounded right and good when I said them.

Almost instantly, I felt better, the heaviness of my fear had lifted, and I stopped worrying about the storm.  It felt as if a bunch of ghosts had just fled my life and my consciousness.

When I look outside, I feel some pangs, but they go away quickly.

There is someone here now who will take care of me, and I will also take care of myself. I will work hard and help, but I will acknowledge what I can’t do as well as what I can do.

The curious thing is that I am no longer afraid of this storm.

I’ll go and get the roof rake out.