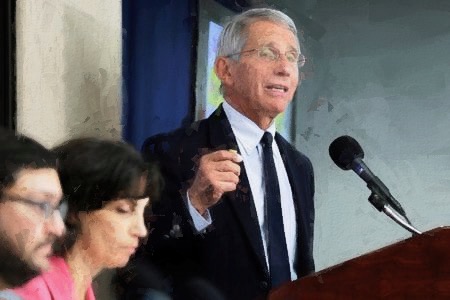 It was a milestone in the remarkable life and career of Dr. Fauci, and in the long, and sacred experience of truth in an open democracy.

This is one of the most respected doctors on the earth, no one has ever called him a “buffoon,” which is defined as  “a gross and usually ill-educated or stupid person.”

None of those terms apply to Dr. Fauci, they are not true.

President Trump quickly followed suit, saying Dr. Fauci’s opinions about the coronavirus and opening up are schools are “no longer acceptable.”

Dr. Fauci is paying the price of the truth-teller from ancient times to now, but so, sadly, are we. When we can’t speak or hear the truth, we are not a democracy any longer.

The person we most need to hear from is being denigrated and silenced.

No, no, I thought when I read about Carlson’s remark, this is wrong, and not just for the obvious reasons.

It’s much more dramatic than that. Anthony Fauci is a parrhesiastes, a figure in Greek Drama, also known as “the one who speaks the truth.”

Soon enough, Dr. Fauci will no longer be the most trusted public health doctor in America; he will be another tarred and battered and mistrusted villain – a “buffoon” –  in the President’s ever-growing gallery of villains and sacrifices – people who dared to speak the truth to his power.

In labeling him as a stooge of the dread democrats, which other TV hosts and politicians have done, they are giving roughly half of the country reasons not to listen to him, and some people will pay for that with their lives.

It’s no longer safe to disagree with someone in our culture, even a President. Critics and truth-tellers must be hated as well and punished, pursued by troll mobs and extremists.

The President is nothing if not direct. Dr. Fauci is much more trusted than he is, so the goal is to make him less trustworthy. That’s already happening, it’s easy for a President to do.

As always, history offers perspective and context. Nothing is new.

Dr. Fauci’s is a common fate among parrhesiastic heroes, who often had to deal with arrogant kings.

Parrhesia is borrowed from a Greek dialogue that means “to speak boldly, freely, or with bombastic bluntness.” It means saying something truthful and freely to a ruler without leaving any doubt about it.

It also implies the use of truth in speech or writing (or interviews).

Parrhesia first appeared in Euripides as a rhetorical device in Greek literature, and it evolved through several centuries.

Later on, parrhesia was introduced in Athenian democracy. Finally, it entered into the field of philosophy, where Socrates was known as a true parrhesiastic writer.

Parrhesiastes were not free men, but servants to the king or emperor.

They were also the world’s first democratic truth-tellers and whistle-blowers.

(I wrote about truth-tellers and kings several weeks ago in a post here on the blog that was shared 258,000 times. I hate to say I told you so when I wrote about the inevitable fate of Dr. Fauci, but I did tell you so. In Greek Drama, the Truth Teller has to die or be silenced, always.)

The truth-tellers in ancient Greece could not use parrhesia if the king was not wise enough or strong enough to enter into the parrhesiastic dialogue and grant permission for him to speak openly.

Bearers of bad news were often subjected to punishment, as they are today.

Michel Foucault, a famous historian, and philosopher, said in a speech on parrhesia at the University of California at Berkeley in 1983 that if the king “lacks self-mastery, if he is carried away by his passions and gets mad at the messenger, then he does not hear the truth, and will also be a bad ruler for the city.”

The wise kings – Pentheus was one – offers his servant a “parrhesiastic contract,” and thus could learn and accept reality and govern wisely. He wanted to hear the truth.

The king, who has power but lacks truth, addresses himself to one who has truth but requires power and tells him: if you tell me the truth, no matter what this truth turns out to be, you won’t be punished; and those who are responsible for any injustices will be punished, but not those who speak the truth about their wrongdoing.

It’s interesting that in Greece, the birthplace of democracy, the truth was one of the highest ideals of government. In the United States right now, lying is seen as virtuous in a kind of twisted and circular way.

The one who lies is the most believed, the one who tells the truth and can’t lie is mistrusted and reviled as a “buffoon” by buffoons, who think of themselves as truth-tellers.

Parrhesia was meant to serve citizens in troubled times, just like ours.

It was meant to curb the power of kings or demagogues to lie to the people. For democracy to work, said the greeks, it must be open. Citizens must understand the truth. Governor Andrew Cuomo has said a hundred times that in times of crises like Pandemics, governments must be open and share what they know truthfully.

Our President despises the parrhesiastes, he forbids them to tell the truth and tries to destroy their reputations – their public personas – as a punishment for bearing bad news, or news he doesn’t want people to hear. People who challenge him become reviled enemies, not free citizens doing their duty.

The pundits all said he would never dare to turn on Dr. Fauci, but it should have been obvious that he would.

In a democracy, believed the Greeks, this was poison corrupting and weakening the thin threads of a democracy.

The truth-teller, as I wrote a month or so ago, is always vulnerable and is always cautious about the consequences of what he might say. The “contract” of Parrhesia is meant to limit the risks of telling the truth to people in power.

I was a journalist for 20 years or so and traveled all over the country. I worked in New York, Washington, Boston, San Francisco, Dallas, Atlantic City, and Philadelphia,

In all of that time, I never met a more honest or decent public servant than Anthony Fauci. When I met him, he was spearheading the controversial and challenging task of understanding the AIDS epidemic and overseeing the effort to find medications to treat it that have saved many lives.

Today, is is the Director of the National Institute of Allergy and Infectious Diseases, he has worked for seven Presidents, from Ronald Reagin to Donald Trump.

He is considered the world’s foremost authority on infectious diseases and has served Americans well for more than 50 years.

When the country was panicking about the coronavirus in January, the President chose Dr. Fauci to help lead the White House Coronavirus Task Force and is found in every poll to be one of the most trusted medical figures in the country.

The President exploited him quite openly to give his coronavirus leadership some credibility. Many people depended on Dr. Fauci to honest about what was happening.

Now that he’s no longer interested in the Pandemic itself, the President is free to toss the beloved and knowledgeable doctor under the bus. There is a new message now: everything is great, go back to normal. We’ll know soon enough if this works.

To Dr. Fauci, lying about medicine in a way that would endanger any human being would be the highest possible breach of faith, the opposite of what is brilliant career was all about. He is never political, even though he is invariably politic, which is different.

He has been telling the truth to power his whole life, but this is perhaps the first time his king holds truth is such low and contemptuous regard.

For our President, lying is an effective political strategy; his ideology is flexible.

He is loved for lying and has converted falsehoods into a virtue, the complete opposite of the Greeks.

Where have all the Gods Gone? Are they wondering what happened to the truth as an ideal?  In Ancient Greek, leaders could be put to death for lying.

From the first, and as a truth-teller, Dr. Fauci would gently correct the President when he said one of the many false, and occasionally profoundly stupid things about the virus, the search for a vaccine and cure, and testing.

The very first time Dr. Fauci corrected Donald Trump, I wrote (I am sure others did too) that his days were numbered. Our President has made it abundantly clear that he cannot tolerate any kind of public disagreement and has no “self-mastery” when it comes to truth.

He cannot bear to be disagreed with.

Dr. Fauci had a brilliant, even dazzling run. He’s lived and worked long enough to become a beloved guide and even a sex symbol; he gets dirty photos in the mail all the time. I’m sure there is another great chapter for him.

But he outlived both the idea of Parrhesia and a king who would agree to it in order to serve his city or country wisely.

The greatest and most dedicated of public servants has fallen out of his time.

Fauci is a parrhesiastes without people ready to fight his freedom.  We are getting numb to outrage.

He soon will be just another he-said, she-said figure now in the raging battles of the left and the right. I hope he’s got a book contract. Soon, you will see him vanish from public view, relegated to the fringes of media.

If there is a tragedy for Dr. Fauci in this, that would be that parrhesia is on life support in America. Truth has a mild heartbeat in our civic life.

When he goes, there is no other truth-teller inside of the government to help us. Andrew Cuomo comes closest, but he is a politician, not a doctor.

Dr. Fauci practices all of those virtues, that is precisely why he was doomed, almost from the first. In all of his many campaigns to fight AIDS and other diseases with six different presidents, no one once ever called him a “buffoon” or claimed his honest advice was “unacceptable.”

Jack Nicholson was right; we can’t handle the truth.

An intolerance of parrhesia,” wrote scholar S.Sara Monoson, “marked tyranny of both the Hellenic and Persian varieties.”

The coupling of freedom and parrhesia in the  democratic process,” she wrote, “functioned to assert two things: the critical attitude appropriate to a democratic citizen, and the open life promised by democracy.”

And it’s decline threatens both.

Dr. Fauci is not a tragic figure to me; he is 79 and has had a full and glorious run. He can take care of himself. It isn’t up to him to make sure truth rises again; it’s up to us. He’s paid his dues.

The tragedy of his downfall to me is the collapse of the critical attitude appropriate to a democratic citizen and the sanctity of the open life promised by democracy.

In America in 2020, we can’t even talk to one another, let alone speak truth to each other.

On a personal level, I commit myself to being honest and authentic. It is a kind of faith for me to keep the truth alive, even on so small a scale.

Dr. Fauci, who is good, is only as good as we are, and as honest and fearless as we are.

I believe he is showing many of us what it means to be truthful, and how vital truth is at this time in our world, and for our country.

The self-image of the democrat citizen is low; our expectations have fallen. Because we hate ourselves, we begin to hate others.

Dr. Fauci is the best role model I know of, I miss him already.