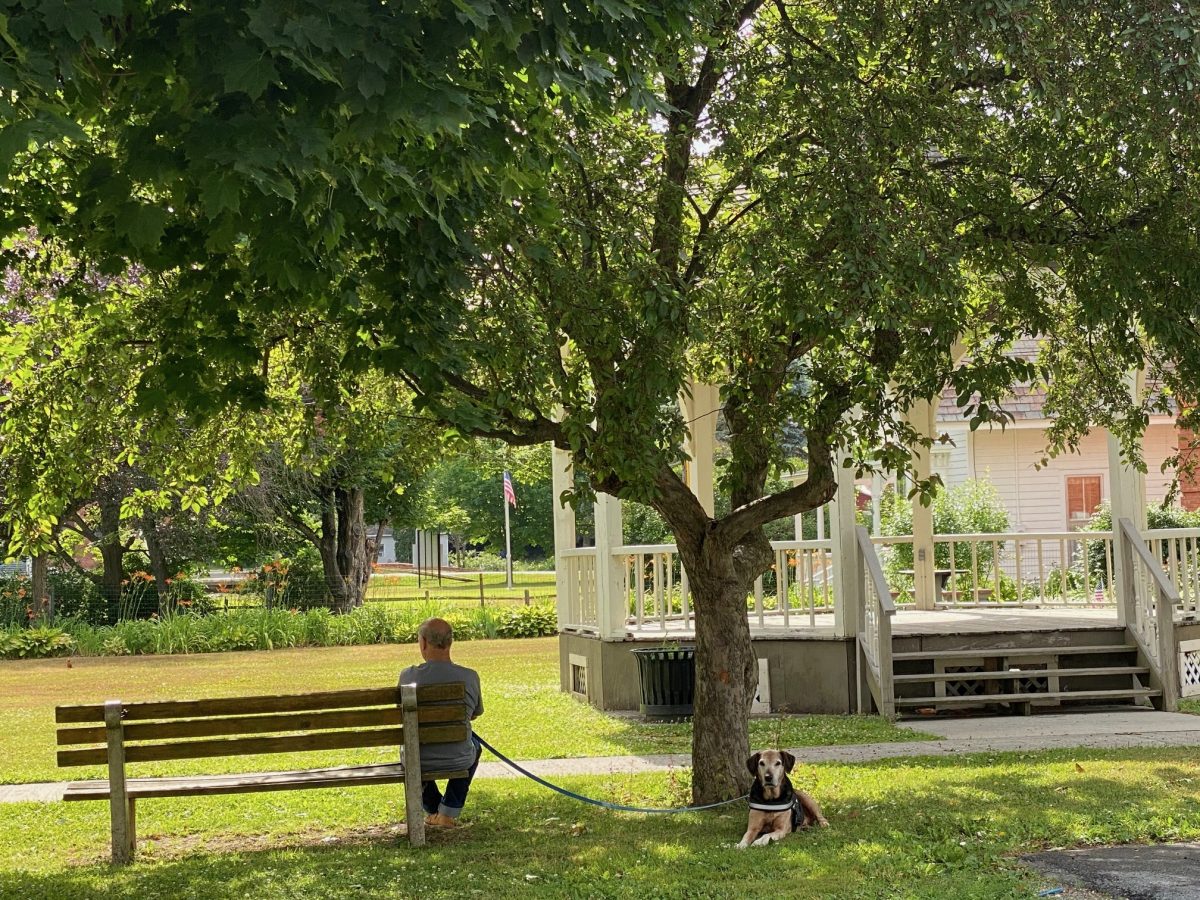 For much of their time with humans, dogs had specific jobs to do – protection, hunting.

In recent years, in America, that work has changed.

The new work of dogs is to help us ease the dehumanization of our technological, aspiritual and money-driven society, and to tend to our emotional needs.

The bank I drive to is next to a park and I often see this man  (above) with his older dog. The man sits and watches the park, he seems lost in reverie. I am struck by how calm he is.

The old dog sits next to him or close by, and observes life on the other side. He rarely moves, except to walk over to his human for a pat on the head. The relationship is close and wordless.

The two have clearly known one another a long time, and I am reminded of how there are dogs that intuitively and naturally calm us. More and more, we need them. This is the new work of dogs, and dogs are the most adaptable creatures.

Dogs have a Darwinian sense of what it is we need, and they evolve accordingly, and quickly. That is their genius.

And that is why we take such good care of them and love them so much. If squirrels could that, they would have much easier lives.

I don’t need my dogs to grieve for me or waste away when I die – how selfish a wish that it – I hope they will have fun, chase rabbits, dig holes, have sex once in a while, run in open fields, love their humans, roll in gross stuff, find work to do.

In 1963, Dr. Boris Levinson, a psychologist, warned that our society was dehumanizing people. Technology was making life more, not less,  stressful, people were spending more and more time at home in front of screens (even then). He saw that religion was losing influence, and we were losing touch with the natural world we once knew so well.

“It would be better,” he wrote in Pets And Human Development, “if society were not so mechanized, routinized, and cut off from the vital rhythms of the natural world. In the meantime, animals can provide some relief, give much pleasure, and remind us of our origins.”

Dr. Levin’s observations were more prescient than he could have imagined. Technology has intruded deeply into the most personal parts of our lives, churches are embroiled in scandal, our communities have disintegrated, our families scattered.

No one foresaw the profound ways in which the Internet would scramble our lives, or that our politics would become so angry and divisive. But Levinson and others did see how life was losing its meaning and sense of connection for people.

“Because we do not preserve old neighborhoods, because we keep moving all the time, there is a great hiatus between the current and the older generations; our entire rootless civilization is encouraging alienation and is leading towards chaos.”

Levinson believed part of our difficulty finding peace and meaning lay in the fact that we had failed to see nature and its animals as friends and partners, even though, he wrote, humans had always been programmed to cooperate with nature and animals.

As life grew more stressful, he predicted, the adoption of pets would become more central to our lives,  in a certain sense a mental hygiene measure helping mankind to abort and ease stress and mental illness.

By 2000, he predicted, the ownership of dogs and other animals would explode in direct proportion to our disconnection with nature and with other people. Their work became us.

When he wrote his book, there were 15 million owned dogs and cats in America. Today, there are close to 75 million, according to the U.S. Humane Society, and more cats than that.

Today, we need them to help connect us to nature and offer us some of the support and love we used to draw from other people. History will have to judge whether this is a good thing or a troubling thing. Levinson thought it would be a mixed blessing.

When I became a writer and began a lifetime of working alone, the first thing I did was to go out and get a Yellow Lab named Julius. Then another, and the rest is a great part and continuing part of my life as a writer and as a trouble human being who needed grounding and wanted very badly to connect to nature.

One of the first things my dogs did was lead me back to nature, where I haved lived ever since and will die. Levinson was right about that too. Humans need animals, and they need to live in nature.

Without it, they are damaged.

I have barely written a single word in decades of writing without a dog around me, and as I write this, Zinnia, another Yellow Lab, sits snoring at my feet, keeping me company and helping to ground me in a troubled world.