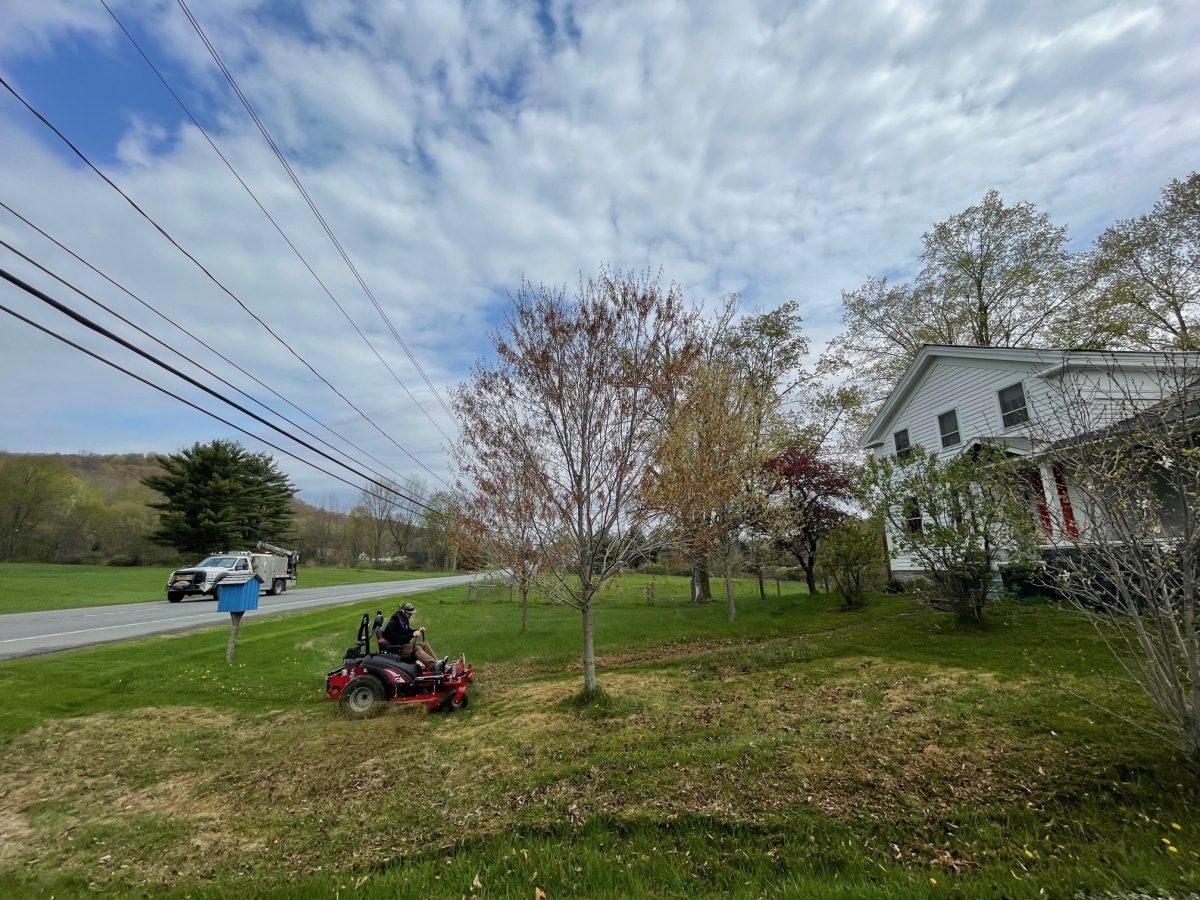 “The beautiful spring came, and when Nature resumes her loveliness, the human soul is apt to revive also.” — Harriet Ann Jacobs

I love winter for several reasons, but the most important one is that it means Spring will come soon, right after the dark days.

The appearance of the landscaper is a sure sign that Spring is finally here and not just pretending. The landscaper cometh today.

Some of my Amish friends are amused, I sense, that I go to the gym but hire people with big and loud machines to tend to the lawn and trees around my farmhouse.

Moise is not into lawn care, at least not yet, and when he is, he will take care of it himself. I don’t see  him wasting much time on lawns.

Mike Conklin, our new landscaper,  showed up with his big white truck. Like me, he likes to work alone, without bosses peeking over his shoulder.

He saved us two weeks ago by putting in a new water tank seconds before the old one disintegrated. Before that, he plugged a leak in the pipes coming from our new bathroom sink.

I haven’t come across anything yet that Mike can’t fix or doesn’t understand. And he is nice as well. I feel safe just knowing him.

And he’s coming at a time when we are re-thinking our obligations to Mother Earth in this time of change and the meaning of a lawn. The truth is, there is no natural need for lawns, it’s all about aesthetics and snooty neighbors.

It is believed that lawns first originated as grassed enclosures within early medieval settlements used for communal grazing of livestock, apart from fields reserved for agriculture.

In most medieval homes, laws were pasture land and maintained through sheep or cows or goats.

I couldn’t help but notice that we don’t graze sheep or cows on our front lawns anymore, and we don’t care what the neighbors think (we don’t really have any neighbors close enough care.)

In the 1700s, landscape designers in England and France got rich people to spend a lot of money on a new fad,  closely cut, well-kept grass areas in gardens.

Leaning on the term “launde,” which referred to a grassy woodland clearing, they coined the  term “lawn.” The maintenance of these “lawns” could only be afforded by the rich and royal families. The early “mowers” were either horses or scythe-yielding servants.

Thomas Jefferson, a passionate horticulturist was among the first Americans to replicate European lawn styling.

In 1830, a textile engineer in England adapted a carpet cutter and invented the world’s first lawnmower, and the lawn took off all across America, also as a sign of wealth and prosperity.

In other words, lawns were for snobs. Capitalism being capitalism, Americans were soon persuaded that they needed clean and trim lawns.

In Montclair, N.J., where I lived for a while, neighbors would come and complain if they didn’t feel lawns were being kept up, realtors told them it would bring down the value of a property.

Mike is more than a landscaper, although that is his work in the summer. For the first few years, I did mow the lawn and loved it. I felt like one of those real men.

I’m a city boy at heart and grew up in Providence, Boston, New York City, Dallas, Philadelphia, and New Jersey. Physical labor was almost always something we hired people to do because in this way we learned nothing about our houses and properties and became dependent on others for the maintenance of our own lives.

One of the reasons I love the country is because people could care less what your lawn looks like.

Still, the property is full of bushes and tall grasses,  woodchuck holes, hornet nests, runaway weeds, and things that need trimming and care.

It isn’t the lawn so much as the sense of a place being cared for. That is important.

I used Florence Walrath’s ancient mower until it fell apart underneath me and my back informed me it wasn’t happy about a push mower that I bought.

We spent some years in plumber/handyman hell, trying to get people to return my phone calls, begging and pleading for people to come when our pumps failed, or pipes leaked or froze. Most of the time, they were too busy.

We had some bone-curdling days as winter storms approached, and our heat or water was in peril. Those were traumas, and I was determined to find people who would help us when we needed it. Then we found Mike, who lives just around the corner,  knows everything about everything, has small children, and is not going anywhere.

Our good and classy friend Jay Bridge, a retired engineer,  often came to our rescue in times of crisis, but he has retired from ladders and roof repairs, basement water systems, and old creaky farmhouse work.

Jay has always inspired me,  he is an open heart surgery refugee like me; he scurries up ladders and walks across rooftops like a teenager. He reminded me that life goes on after heart surgery.

When I last called Jay for help with our water crisis, he suggested I call Mike. “I think you’ll like him,” he said.

We do, very much. I guess part of the Bedlam Farm Old Man Health And Safety Campaign recognizes what I can and can’t do. It’s a slow and fraught process.

I can’t take care of the lawns around the house, or the bushes or trimming or lilac trees. That’s why I got my raised garden bed; that’s my territory now—my own Zinnia and herb garden.

I was pleased to see Mike rumble into the driveway this morning. Spring was really here and the farm is safe.

Mike is easy to talk to, honest, and thoughtful; he still thinks he can educate me on the technical inner works of the farmhouse, which has broken many a handyperson.

The good landscaper isn’t just about lawns, but understanding that very old farmhouses like ours need constant tending and loving care.

But Mike is slowly giving up on educating me and just goes straight to Maria instead. She knows all that stuff and can hold her own with any guy. We both joke about the moment repairers get that and stop talking to me altogether.

I confess to liking landscapers in my life. The rumble of their mowers suggests spring and gardens and color to me. They are independent and tough, they are rural cowboys in some ways, only they ride big mowing machines, not horses.

When they leave, the farmhouse seems to sigh in relief, like someone taking a shower after a hot or muddy day outside.

We are experimenting once again with letting nature do its thing on the f front lawns. After today, Mike won’t cut them; the lawn doesn’t need to beneath and trim. The natural look is quite beautiful and a gift to birds and insects which need ground habitats.

I think of all the money and fuel spent on trimming laws, and I have been persuaded over the years that there is no reason to do it other than to make weed repellent manufacturers happy and waste fuel and kill bugs and birds.

If the world is to survive, we need to change; that is pretty obvious to me now. We are working on it. One thing at a time.

So for the front of the house, we’re going natural again this year. The role of the landscaper, like the role of the fossil fuel company, is changing. I don’t see a bright future for all of those neatly trimmed lawns.

But the spaces around the farmhouse will always need love and care. And I thank Mike for officially kicking off Spring and bringing the sweet smell of life.