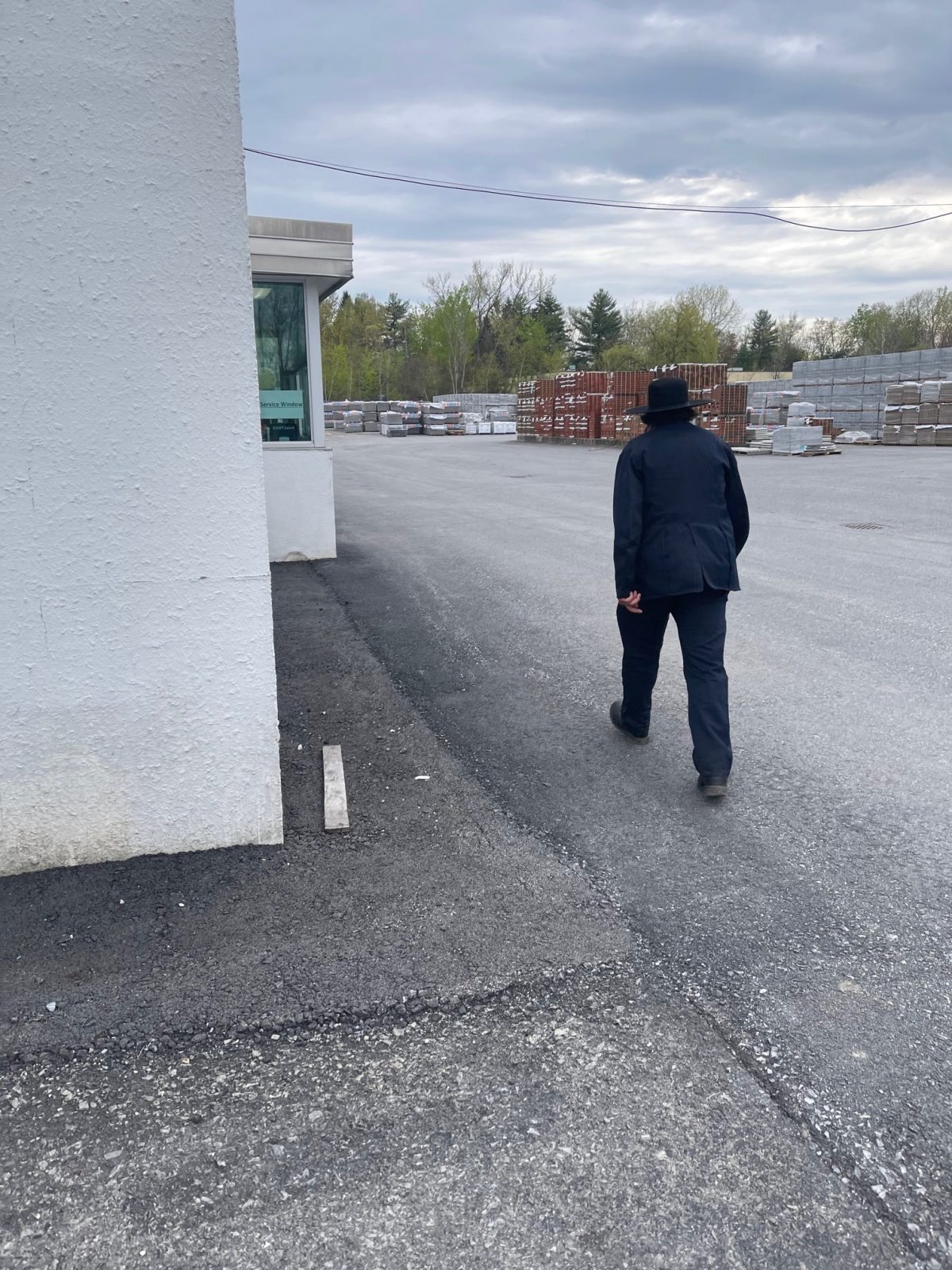 My friend Mosie is altering my perspective and experience, something I didn’t really expect but is enjoying. I went to pick him up at the Glens Falls Bus Station at 2 p.m.

I know now that Mosie is a man with a mission; he is juggling a dozen balls at once, several of the pastures,  crops, plants, barns, and new homes for him and members of his family.

All the details are in his head, spinning and spinning like a wheel on a wagon.

After watching Moise in action, I may never pay for shipping again; he could hold his own in a Morocco Bazaar; you never even know he is bargaining.

His trips to Glens Falls, the closest good-sized city near us, allows him to do many more things than get home (he was attending an Amish Church Communion in Lawrence County over the weekend.)

The complexity of his transportation challenges is daunting. Getting drive to Glens Falls is a big deal, and he needs to get as much done as he can. As long as there’s daylight, he said, he’ll be plowing.

Barbara is staying behind for a few days to visit relatives, so it was just the two of us again, the cultural evolution of Butch Cassidy and the Sundance Kid, two improbable partners, or maybe Lewis and Clark exploring a new world together in different ways.

First, we drove 10 miles to a Credit Union  (on the other side of Glens Falls) where the Amish can bank (they don’t apply for or accept Social Security Cards), and most banks require them for new customers. Credit Unions don’t.

Another Amish friend was getting money to pay Moise back for a loan, and we were meeting them there, an arrangement Moise made on the bus upstate.

We sat outside while Moise plotted concrete pricing and the price of blueberry plants, and the Amish men did their business and came out with the money.

Moise’s wallet is crammed with the numbers of businesses he needs but can’t ever call himself. I’m getting the hang of the calls.

“I don’t want to take advantage of you,” he said, rummaging through his neatly organized wallet stuffed with cards (he is also a corncob pipe smoker, but he always gets out of the car to smoke). I looked for Duke’s Concrete on my GPS; it was about 15 minutes away; we found it (on the other side of Glens Falls.)

I had to go in with Moise because everybody wants e-mail and phone numbers, and he doesn’t have either.

He was getting quotes to buy concrete for a barn foundation he is planning and a house foundation for his daughter-in-law, who recently arrived in our county.

He figured two truckloads of concrete would probably get him free shipping (no delivery fees in this case), and it did.

“Jon,” he says in his gravely voice, “you ought to come and see the barn-raising. I think you’d love it.” Wild horses could not keep me away.

Score another victory for gentle but persistent bargaining.

Moise does not buy anything the first time around.

He takes a quote and will ponder the purchase, and asked a dozen times about discounts, and perhaps come by to the farmhouse have me call and troll for a better price somewhere. I can tell he likes this deal.

But he often does better.

As I headed towards home, he wondered if it would be an imposition to stop at some plant nurseries were passing to see if there were any blueberry bushes for sale; he wants to start planting.

He came out of the store quickly shaking his head; these bushes were more than $20 apiece. No sale. “When you have time,” he said, “let’s go online and look for better prices,” he said. “I think we can do better.”

We?, I laughed. I don’t think we want my blueberry bushes, but we seem to be a team. Soon after I got home, I went online and found several blueberry plant sellers who did better. I printed out their quotes ($18 a bush was the best I could do – free shipping!), and I’ll drop them off for him to consider tomorrow.

Worn out (me, not him), we got home around 4:30 p.m. On the way, he wondered if perhaps we could detour and check out the land of a farm his daughter is moving to with her family. Not today, I said, I’ve got to get home.

Of course, he said, maybe next time.

On the way, he surprised me by offering to give me a book about the terrifying kidnapping of two of his daughters in Canton, N.Y., in 2016. It was written by one of the detectives who worked the case.  He said the girls were fine and had moved on.

I thought of the Amish creed: accept God’s Will. Let Go. Move On.

On the trip, as always, we talked about Amish faith – he is a member of the conservative Old Order Amish group and his faith in Jesus and his plans to get sheep and goats next year and fence his pastures.

When we got home, he invited me into the barm where they are staying until their home is built and gave me a copy of the book.

He is calm and clear when he speaks about the kidnapping. No anger, no lament.  Be Humble. Let It Go. Accept God’s Will. Move on. He offered to pay me for driving him, and I said no thanks, but I would accept a freshly baked loaf of wheat bread and the book in exchange.

We agreed to take one afternoon next week and drive around to all the places he needed to close all of the deals and purchases he wants to make.

I invited him to come to our Sheep Shearing Friday, Liz Lewis; our gifted Vermont Shearer is coming; she raises and sells meat and wool sheep.

Moise is eager to get the hang out of shearing; one thing is certain: he won’t be hiring shearers any more than he would pay someone else to kill the pigs whose meat the family eats.

He said the key to surviving farming is to be self-sufficient and not depend on government money or bank loans. I thought of all the failing farms I visited when I photographed them; everyone was in debt to the government and banks. It was the death of the family farm; Ed Gulley used to tell me.

They kept giving money to the family farms until they sank under the debt and government interference with milk pricing.

Our conversation is lively and continuous.  And easy.

We talk about family and faith and soil and fences and always – always – his hopes for his family and his determination to “give every one of them a hand when they need it.”

He sees his children having their own farms and businesses. The Amish don’t take out bank loans; they help each other out.

Tonight, I’ll sit up and read the book he gave me. He wants this story told.

He wants people to know what happened; he wanted the book to be published. If it’s appropriate and feels right to me, I’ll write about it in a day or so.