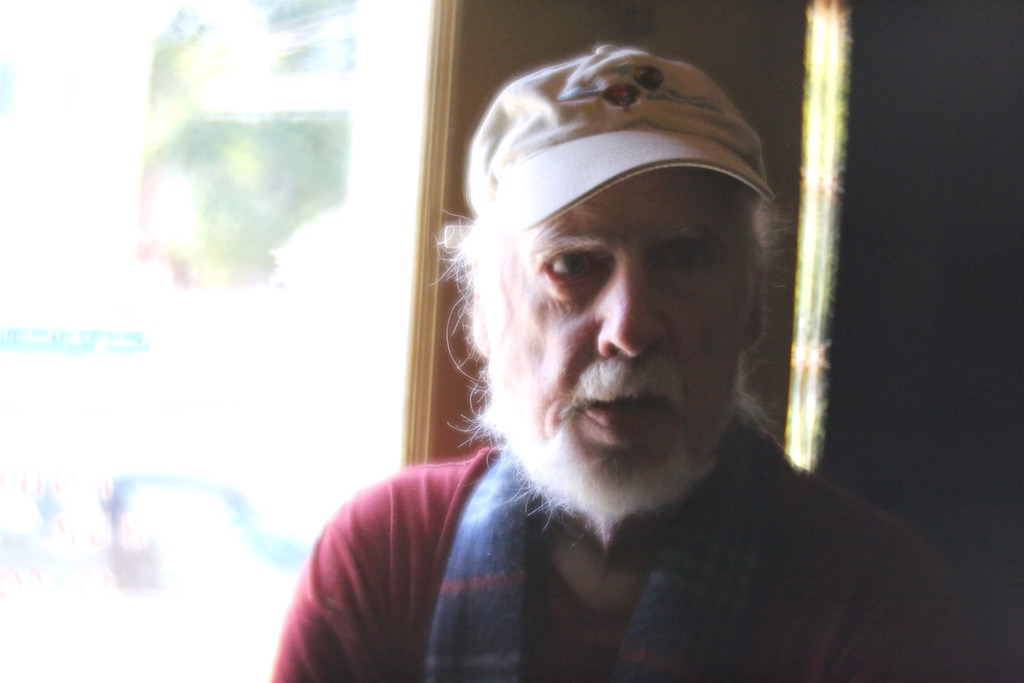 George Forss, a brilliant photographer, artist, and good friend, was found dead yesterday in his Gin0for studio and Arts Center in Cambridge, N.Y.  I know he was struggling with congestive heart failure for some time.

When I last saw him, he told me he was ready to go with the aliens, his faith and salvation, and the grounding force in his long and amazing life.

According to critics and some of the country’s best photographers, George was one of the great landscape artists in American history. You will never see photos of New York City again like the ones he took.

I am blessed to have one hanging on my wall.

In the 1980’s the aliens in Central Park in New York told him to move out of New York City and up into the country, so he did. He brought his brother Mickey, who has schizophrenia,  up with him.

George has taken care of Mickey ever since. People are contacting social services about finding the right home for him.

George’s friend Jack is a golfer, and he and George watched every golf tournament in the country every weekend for 20 years.

George knew absolutely nothing about the game, never played, and had no idea how it worked.

He just loved to watch the tournaments with Jack.

He loved his art gallery, but after I made a trip to Brooklyn to meet his agents and see his work, a part of me wished he had never left New York.

His genius thrived there, not so well in the country. He collected most of his camera equipment from the garbage people throughout. He made a number of his own lenses, some of which were the envy of other photographers.

When he started taking photos, he had to duck the police in Manhattan; they would arrest him for peddling without a license. He never quit.

He ended up on the cover of Time Magazine.

The city matched his remarkable eye; it was the perfect creative challenge for him; he never quite saw the country in the same way. He was born in Brooklyn, and Brooklyn was always a part of him, more than the country, I thought.

He never stopped trying, though; he would e-mail me photos almost every day until almost a year ago.

He was a wonderful friend to me, even though I lost touch with him somewhat in the past year.  It was hard for me to communicate with George near the end.

George lived a long, fruitful, and happy life. He knew he was crazy; we often talked about it, he put it too good use, he laughed at it. Lots of geniuses are crazy.

The truth is, he lived a lot longer than he should have.

His recent weeks were hard; his longtime and beloved companion Donna was taken to a mental hospital and refused to see him or speak with him.

He deteriorated rapidly after she was gone. He told me she had run away, but no one is sure.

George left no will and left no money. He died in his bed, which he wanted to do if the aliens didn’t get him first.

We are trying to raise enough money for him to have a decent funeral, Jack Metzger will be putting up a GoFundmeCampaign for George’s funeral, and I will be supporting it on the blog.

Any help will be appreciated. It should be up within the week. I’m sure George wouldn’t want anything fancy.

He was incapable of discouragement, whining, or lament. He was good to people.

For a couple of years, we met every week for lunch. He loved to come over to the farm and photograph the donkeys.

His life was never easy, but I never heard a word of complaint from him. His doctors could not believe he was still alive, but he said the aliens who kept him alive this long would come and take him when it was time.

In all his years of alien investigation, he only saw one alien ship, hovering just above the site in Schuylerville, N.Y., where the British surrendered to the Revolutionary Army.

George taught me a lot about photography and praised my work, which was humbling and affirming.

Sometimes we took photos together; I will always cherish that, including when his camera caught fire while he had his cape and hood on.

My heart is broken a little today. I accept death as a part of life, and George had a good long, and meaningful life. But he was one of a kind. There is no one else like him.

George is one of those rare people who didn’t have a mean or angry bone in his body. He never said a bad word about anybody.

I’m not into mourning or looking back, but his death is a real loss for anyone who knew him. I hope we can give him a proper funeral. He wouldn’t want anything fancy.

I never knew and loved anyone like George, and I will never know or love anyone like him again. He was found by Jack, whose own studio was right next door.

Jack checked on George every day.

But I will always be able to find George; I know just where to look for him.

I have to look up at the stars and smile at the first moving lights. I will always be thinking of him holding his arms up in the air and shouting, “take me.”

Bless you, George; you were a wonderful human with a great big heart and a true genius with a camera.

“I’m up here,” he will be shouting. I will be smiling.