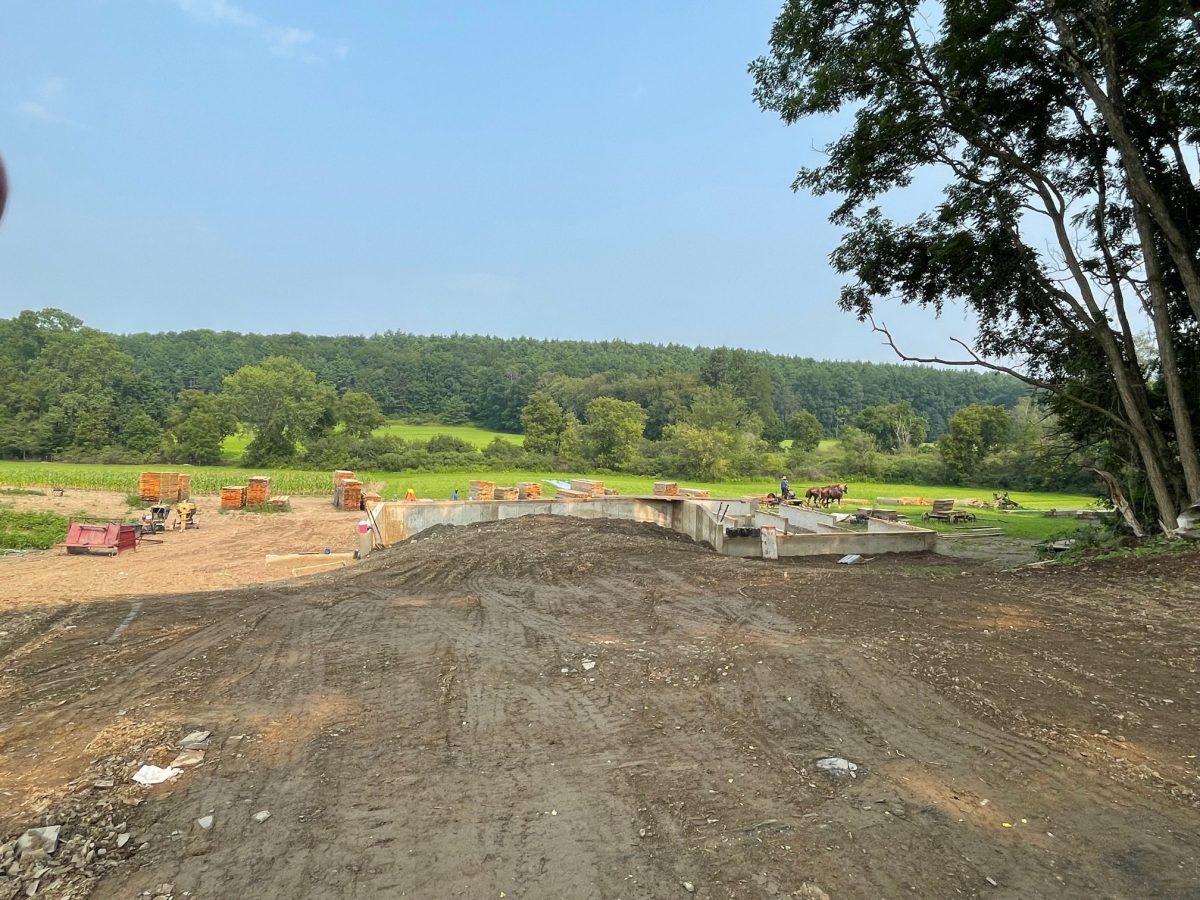 Over the weekend, the tempo and feel of Miller’s Barn Raising have changed, I can feel it change day by day, and I realize I have to go every day to see the difference. It is not casual, there is little laughter.

There was a joyous sense of community and family during the first 11 days.

That has shifted; Moise has settled down to the heart of the experience.  He is a little more serious every day.

The concrete has been laid, the giant first step finished. The roads and surroundings have been graded, leveled, and made neater. Friday is a big day for the family. Next Wednesday will be bigger.

The work tools, tool belts, water jugs, and soda bottles are all gone. The floor of the barn has been swept.   The buggies are being scrubbed.

The tools and machines are all lined up, like taxis in waiting at an airport.

Over the weekend, I had the sense something was coming, something powerful and mystical.

Moise is soberer when he talks about next week and what needs to be done.

Barbara and the girls are working hard, stockpiling food and candy bars, and drinks. There is an air of expectation -friends, family, elders, the church itself is gathering around the farm, preparing for next Wednesday, the 28th, the day of the barn raising.

Moise is busy every minute of the day. He has momentarily given up trying to educate me in the ways of soil, pumps,  nonelectric machinery. Good luck with that, I say. He is never deterred.

Normally, we would talk and chat when I visit. This week, he nods and waves to me; he is the leader locked on the barn raising and what has to be done.

I understand. I’m here to help. A few weeks ago, I overheard Moise talking to Barbara about me.  “I get the feeling,” he said, “that Johny is one of those people who like to help.”

Yesterday, Moise plowed a path behind the barn to the road and cut the hay in the back pastures. The farm is neat, clean, and filled with crops and tilled fields.

There is not one piece of junk or debris lying loose anywhere.

Amish gatherings are always about more than they seem.

They tap and replenish social capital, community and reinforce force one of the most sacred tenets of the Amish faith – the idea of mutual aid.

When one needs help, everyone comes to help.  The barn is about much more than a place to house sheep and cows and farm equipment.

It is a symbol of the church, the sense of togetherness, the importance of community. This is what makes them different, what sets them apart. 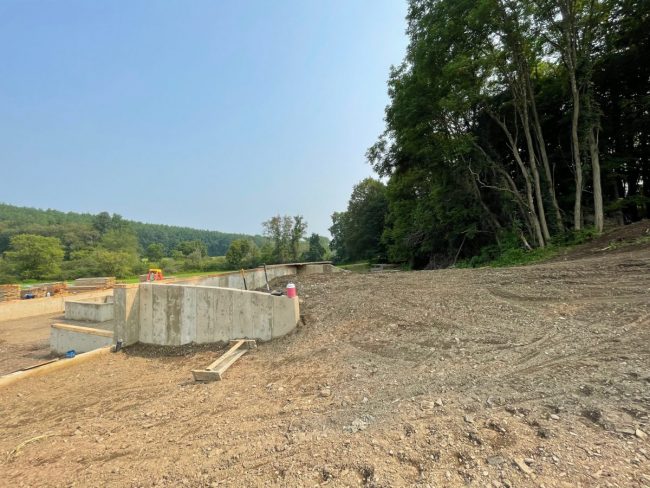 (Above – smoothing the rise behind the barn, building a road.)

Modern societies segregate work and play. The Amish call their gatherings “frolics,” they are meant to be festive as well as productive.

Although “frolic” suggests merriment, writes John Kraybill in The Amish,  the Amish use it to describe a “work party” that exemplifies the joy of hard labor and especially shared labor.

This is a fundamental tool for keeping the community close. This is about faith, not construction.

Every day I try to visit the site around noon, when Moise and the workers are inside, having lunch. I like walking around the barn alone, soaking up the feeling.

There is a gravity there, a spiritual feeling, a place of solitude.

“Frolics” are commonplace in Amish communities; they might involve building a new pig or main barn, adding a room or apartment to a house, building a house, or building a storage shed at school.

In addition to working, there is time for quiet, for singing, for prayer.

During a severe thunderstorm last month, I rushed over to a work party – Moise was building a house for his daughter, who had moved here – to warn him of the impending storm, which the weather service said was dangerous.

When I got there, I found the work party – about 20 strong – sitting in a circle in the pouring rain and singing.  Moise was sitting at the center.

They looked at me puzzled, smiling, as if I had lost my mind. I left, embarrassed and humbled.

You learn about the Amish that differs from the outside world: you don’t warn them about things. Their lives are in God’s hands, not the National Weather Service.

For some frolics, men and women join together. For the barn raising, women will be in the farmhouse barn making quilts, shelling peas,  baking cookies,  preparing meals.

Kraybill writes about a barn raising in southern Indiana that attracted Amish participants from four different settles in two states. Some of the workers came in buggies, others in busses and vans. Some drove their own trucks.

A few had hired English drivers to bring them to the site. Many had long beards; some were trimmed. Some wore wide suspenders, others narrow ones.

Most spoke Pennsylvania Dutch; the rest spoke in  Swiss  German. About half of the men smoked tobacco; others refused to smoke or chew on principle and separated themselves from the smokers.

The men, said Kraybill, committed to helping one another, had come together around a common building project as Amish people, doing what Amish people do – they help each other. There is no one way to be Amish; there are many. On the raisings, there are no differences, no arguments.

So tomorrow, the work on Moise’s barn, on which he has labored so intensely and continuously, rises to another level. The work will begin on the posts and beams that will ultimately support the roof. Friday, the posts go higher.

The last preparatory work starts early Friday morning, with about 15 to 20 workers, most family and members of the community. As the week wears on, the numbers of Amish workers will grow to between 75 and 100. 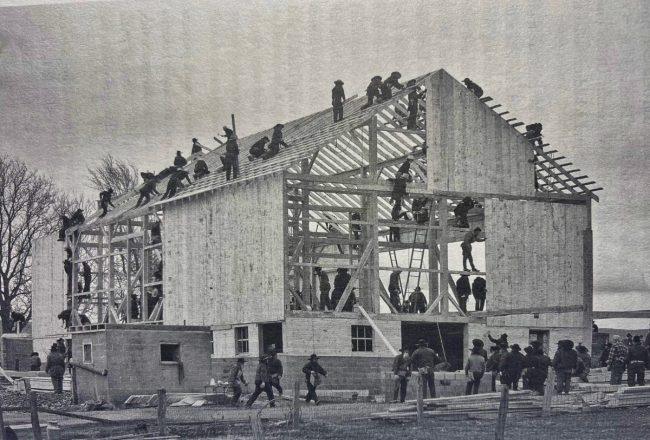 I did find a photo of an Amish barn-raising in Pennsylvania. The above photo was taken with permission.

By the time workers arrived from all over, much of the barn will be finished, but not the roof.

I have been invited but asked not to bring a camera.

I will honor that request. My wise-angle and landscape photography around the farm is tolerated and approved of. This would be a violation of trust.

This week, I’ve worked to support Moise and his family in indirect ways – bringing ice cubes, ice creams, delivering pie pans and donut boxes, shopping online for supplies for making all of the guests comfortable.

This is something new to me, yet I am drawn to do it.

Moise did not ask me to do these things; he wouldn’t. We speak to one another in silent ways, with nods and waves and smiles.

Today, Barbara thanked me for the help. It meant a lot. I am beginning to learn what it means to be humble.

Moise reminds me to try to get there around 5 a.m. “Get up early, Johnny -boy.” I will.