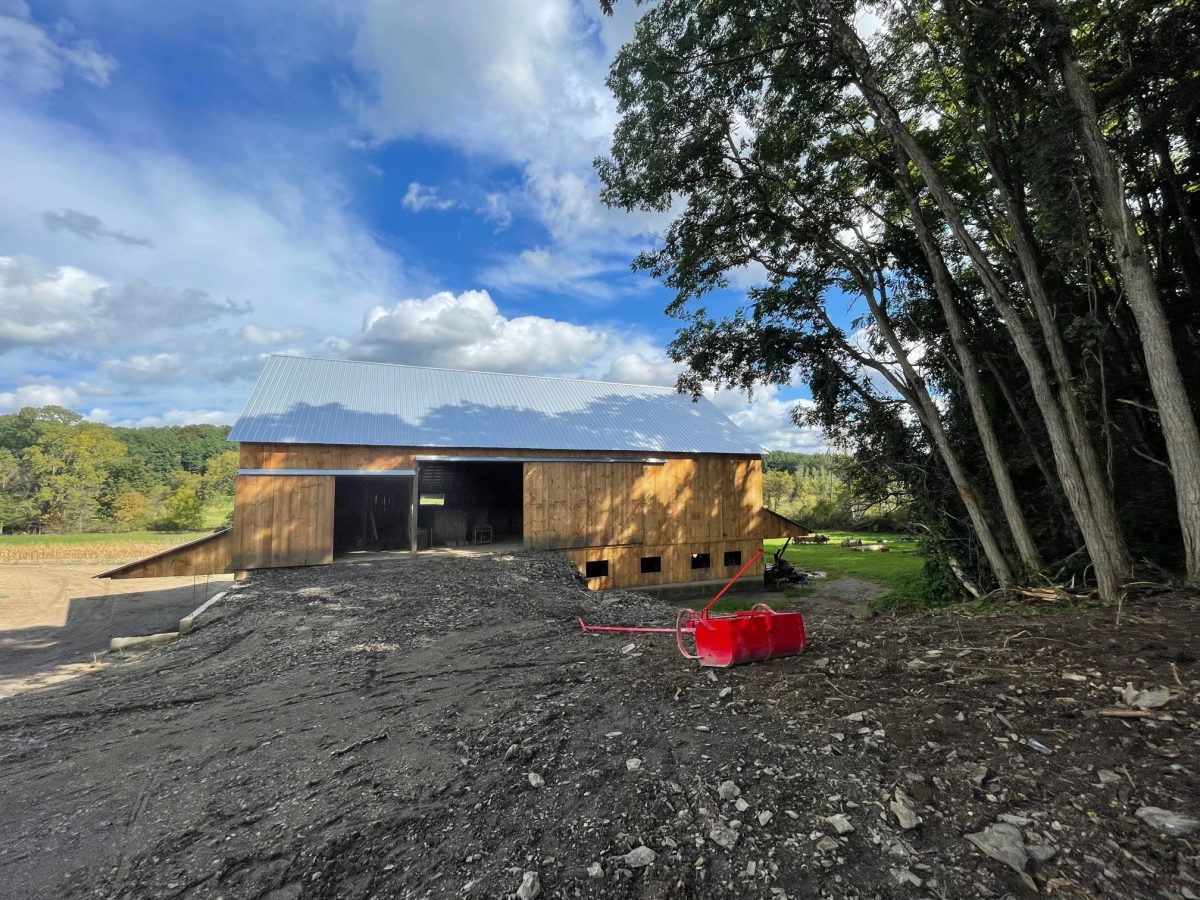 When Moise told me he was building a road from his barn out to the field where he is building his new home and down to the highway, I thought he was dreaming. But it was really no big deal for him.

There’s no vacillating. When God asks you to do something, it usually gets done.

I am still learning and in shock from seeing what two or three people can build with a couple of horses and iron determination in a few days.

A couple of weeks ago, Moise bought a snappy red dirt scraper and paid a contractor to bring in a giant excavator to dig out a foundation for the house.

Moise and his son Joe dug the road by themselves with the aid of two big draft horses and a couple of cousins and nephews.

It was not a big deal. I call it the Road That God Built, and I mean no disrespect. The Amish believe  God guides them in everything they do. It keeps them from considering failure or retreat, I think.

Some months into my friendship with Moise and his family, I am still surprised and fascinated by the very different ways in which the Amish live.

They are different from us in almost every way. And they are so successful some sociologists are wondering if we all won’t be Amish one day.

They think smaller; they are more informal; they are wary of bigness and growth, which they see as a sign of greed. And they are growing like mad.

The Amish are forbidden to be greedy; this would not work out in Washington or Wall Street. Yet, they are consistently successful and content. And growing in population.

The Amish are thriving in ways we are not.

They don’t fight, argue, or compete; they have created an enormous safety net for their church members.

They don’t need to worry about hospital bills, debt, electric bills or car payments, retirement, mortgages, divorce, lawyers or lawsuits, or growing old without a million dollars in the bank, as we are told again and again we must do.

Several recent articles have openly wondered if the Amish are not taking over the country in their plain and simple way. On freethinker.com, Barry Duke makes a case for the Amish growing so rapidly that they will one day be the dominant social element in the United States.

Due to their opposition to modern birth control and their value on fertility and large families, the Amish are among the fastest-growing populations globally, certainly, in the United States, where a divided and disheartened population has fewer babies than ever.

According to Duke, new research suggests that in 215 years, if current birth rates hold, the Amish numbers will be greater than the current population of the United  States – 237.2 million.

According to Elizabethtown College, the Amish population has doubled every 19.63 years on average. 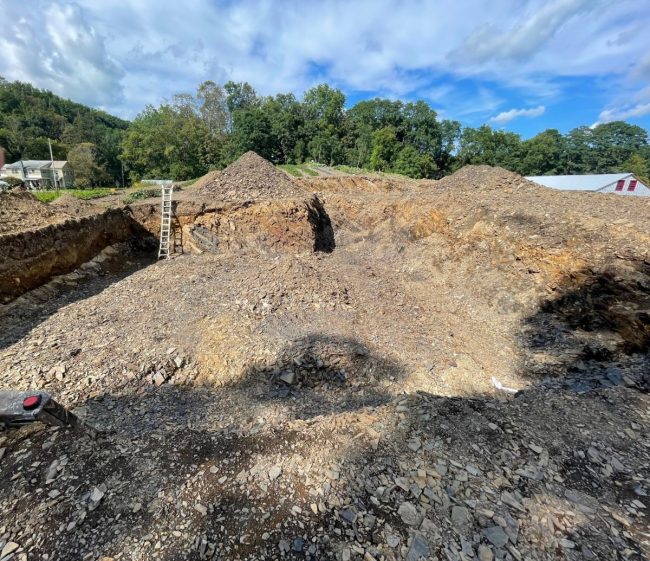 (Above, the foundation is dug for Miller’s new home. The concrete gets poured in a few days.)

And all this without a single lawsuit, gun, war, merger,  takeover over, or shady scheme. I did think how wonderful for the earth it might be if the Amish were in control. I suspect they would figure out how to fight climate change.

As I’ve gotten to know Moise, who is an ender in his church sect, I am struck by the amorphous nature of the Amish Church, its loose, fuzzy, and ill-defined structure. In fact, there is hardly a structure at all.

There are no big offices, no national headquarters, no lobbies of any kind, no public relations campaigns or crusades, no proselytizing, no one investing in a single stock.

There is no marketing team or executive director or president to promote Amish interests, no visits to the White House or appearances before Congressional committees, no ads or 20-year plans, no boards of directors, no lawsuits when wronged, no defense when assaulted, no penalty for static income.

No one in the Amish world gets fired or laid off.

Moise doesn’t have to deal with contractual or formal relationships; he needs nothing from banks except a place to deposit money.

Amish life is bounded by the Bible and the teachings of Jesus, not by any single Pope or Rabbi, or Imam.

Kitchens, shops, and at-home kitchens and barns are the offices of the Amish world. They offer space for committees, worship, and socializing; these groups are organized as needed and disbanded when the work is done.

I’ve learned that people seeking official Amish opinions and politics are headed for confusion and failure. There are only traditions and the teachings of God and Jesus. They are guided by what they have always done, not by what they hope to do.

And very few people outside of their culture can say precisely what the rules govern them if they exist. I’m pretty good at prying things out of people, but I’m not getting too far with my friend, the Elder.

Theirs is an informal culture; people are much more interested in who they are related to than what they have done, how successful they are, or how much money they have.

From egos to organizational units, Gassenheit, the teachings of the Amish soul, prefer small-scale things, as opposed to the American culture, which is obsessed with bigger and bigger things.

In the U.S., nothing stands in the way of bigger, no matter the cost or damage.

The Amish congregations of worship are strictly limited to small numbers, usually around 25 people.  They want church members to really know each other rather than sit on Sunday in vast and expensive cathedrals following services on TV screens.

Large manufacturing operations are discouraged or forbidden in the Amish world because they draw too much attention to a quiet and intimate society. The Amish believe in earning what you need, not what you can get.

I can’t but wonder just how many so-called “devout” people in other faiths are so eagerly taking part in the destruction of our world.

In our culture, people always ask each other if they are introverted or extraverted; they often identify themselves in one of those two says. In the Amish world, nobody has to ask.

Everybody is introverted as a matter of faith. You won’t ever see an Amish man or woman singing Kareoke in a bar or writing an op-ed piece in the local paper.

The Amish have decided as a culture that, in the long run, bigness would damage or destroy their community’s connected and nourishing character, built-in support and love for one another, and common faith.  There is no fighting about ideology in the Amish Church.

Moise tells me he feels well known in his community, has never feared vanishing in a crowd or being overlooked.

Ironically, a culture known for being shy and quiet is now the subject of growing speculation like that of Medium magazine: “How Long Until We’re All Amish?”

Sociologists are unanimously united in saying that won’t ever happen, in large measure, because the Amish don’t want it to do. Domination and conquest are the very last things they seek.

But the speculation does reflect the growth and contentment of a culture that stands out in the anxious and troubled world beyond their wagons and homes. We are all drawn by their community, their simplicity, their meaningfulness, and their contentedness.

Tomorrow I’m driving Moise to Albany, and I’m bringing some of these articles along with me. I’m curious to see if this thought has ever occurred to him, and if so, what he has to say about it.

I’m not sure if this is a conversation he wants to have. Moise is used to me by now, and he can turn to stone politely when he wants to. It will be fun to try.