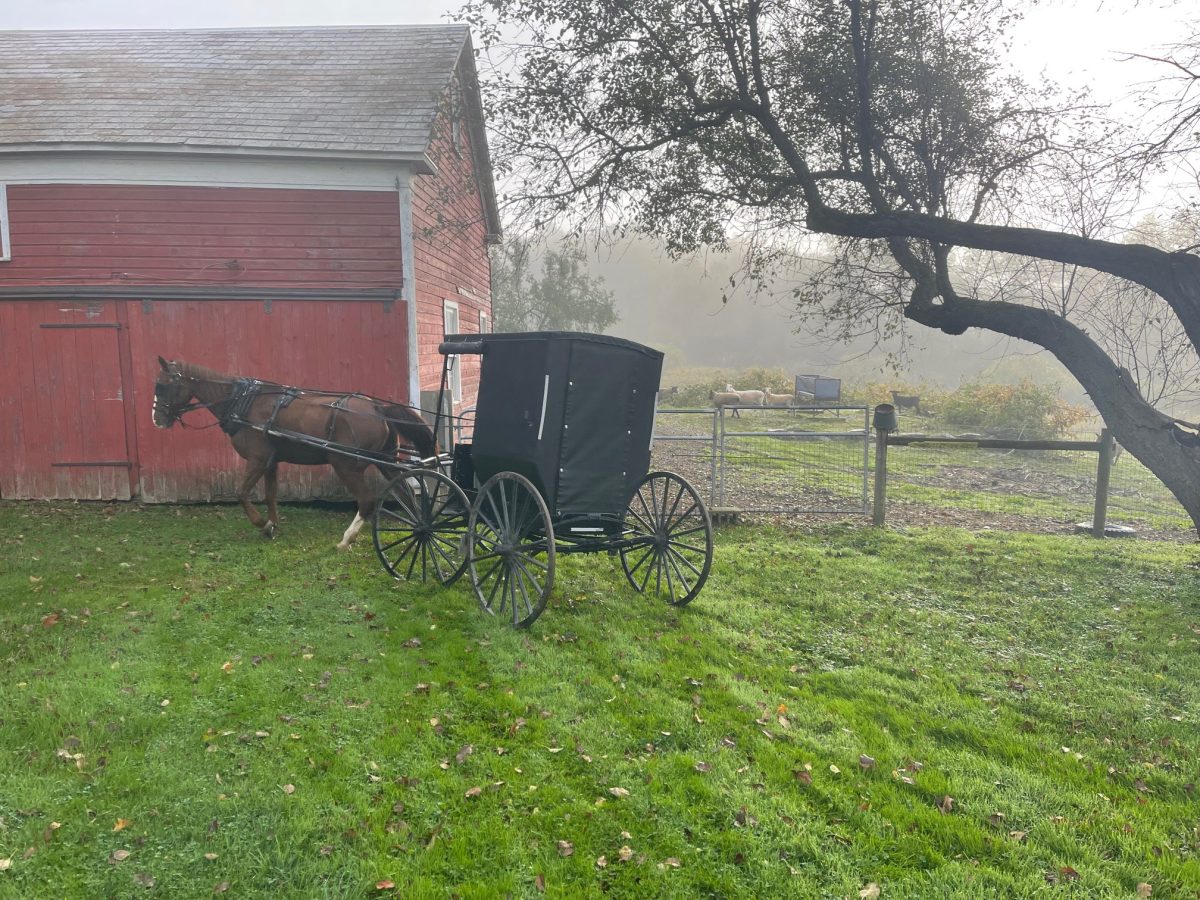 My friend Moise rode in just after dawn this morning, his horse neighing hello to the donkeys (who are warming up to him). He tied the horse up to the barn, showed up at the back door, came in, took his boots off, wiped his feet, and asked me how the surgery went.

He took a long look at my bandaged foot.

He looked a bit distracted as if his head was full of a hundred chores, which it usually is. When Moise comes to our house, he is usually all business. The Amish do not chit-chat, except on Sundays.

“I meant to come down and see you after the operation,” he said, “but I got awful busy.” I laughed.  He looked a bit abashed.

When aren’t you always busy, I asked?

I told him I was fine, healing up well, and should be up and moving around in a week. I started to say to him about my sheep apnea mask, but I saw his eyes rolling around in his head.  He had no idea what I was talking about.

“I suppose you can’t drive me to Albany tomorrow?” he asked. Maria gave me a look that would freeze steel, and I said no, I wasn’t supposed to drive any distance for a while. I didn’t want to crack up the car with him in it.

Moise shifted gears; I could hear his brain click as he scanned the list of drivers and neighbors in his head. We both enjoy our rides together, and he loves my hybrid car because it is so quiet.

He said he learned this morning that the girls and Barbara were out of donut boxes, pie pans, pie lids, and the little plastic containers they used to make Halloween bars that they sold every year. For the Millers, this is close to catastrophe. 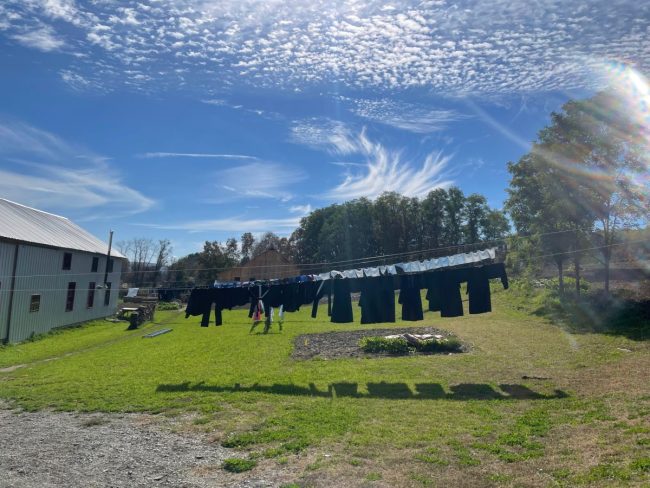 I felt a twinge of guilt; I’m usually the one who asks them if they need new boxes and pans; they don’t seem to want to check on their own.

I was dressed in sweatpants and had a worn blue farm shirt hanging out over them—recovery clothes. Moise was done with the surgery. He had business to take care of.

I invited him into my office, he pulled up a chair, moved in specially for him, and I fired up my computer. We went at it, visiting old orders lists, measuring the pans and boxes on the dining room table,  checking back to see if prices had changed, browsing vigilantly to root out shipping costs, and scanned for discounts.

We never go for the first thing; even if it looks reasonable, we make sure to look at several items. We always look for a better deal. Sometimes we find one.

I was proud of myself for finding 1000 plastic containers for the food bars they make for $8.99. Moise wanted to see if there was a better price. “The only better price he said is free,” I said, “and I don’t see that happening.”

I said I didn’t know this company, and there were no details about shipping. The first place guaranteed delivery by Friday. How long was Barbara willing to wait, I asked, to sell her Halloween Bars? The holiday is two weeks away.

He relented, but reluctantly.

Moise loves coffee, but Maria and I don’t drink it. He passed on tea. I love shopping online with Moise; it is always a great adventure; I love his focusness and fierce drive for the cheapest possible way. And this is how we communicate with each other.

I urged him to buy two of everything, as shipping took a long time these days, and supply lines out there in the world were a mess. He didn’t know what I was talking about. First, he never wants to buy two of anything, but I dug my heels in said he was all out of everything now, and in a pickle, why repeat the drama? He caved. Same prices as last time, small discount, no shipping fees, three-day delivery (an estimate.)

I keep forgetting that Moise is a shy man at heart; he seems so confident. It is difficult for him to come and sit in my house, but it is also great for us to shop together for the things he needs. He has few other ways to get the things he needs so quickly and inexpensively.

But he never seems as calm and at ease as he does when he is on his turf, sitting in his rocking chair, or behind a plow or rake or concrete pouring machine. When we settled on what we would buy, I saw him relax; his eyes lit up like a teenager playing a video game.

He trusts me, and I trust him. We connect in the ways that we can; we respect the many boundaries that divide us.

I asked him how he liked the boots I left for him; the size 9’s he wanted. He said they were fine, but I could see something was wrong. “Okay,” I said, “what’s the problem? I can take it.” Moise hates to seem rude or ungrateful or be rude or ungrateful.  He also can’t lie, and these two values often collide.

“I guess I didn’t realize my size had changed he said. I’m a nine now. I can get into these boots, but they are right.”

Tight boots are not an acceptable outcome for someone like Moise, not the way he plows and digs and hauls outside all day. I said I would get a size ten boot for him.  We could still return the other.

He had something else on his mind. “I’d love to get a pair for Joe (his ten-year-old son). I think he wears a six. But maybe you could get him a size seven because he’ll be bigger next year. (And, I thought, he was hoping not to have to get him another pair next year.)

We spun from site to site and looked and argued about the best pie pans, how many, how big, what color, any shipping, lids, or no lids until he was satisfied. Then he gave the nod, and I ordered them online, $233 in all; they are expected to be her in three or four days.

Mosie thanked me, jumped up, said goodbye to Maria, got his boots on, went out, got into his buggy, and then trotted off. It was great to see him, and shopping with him online is our way of bonding. I wondered online if he was concerned about my surgery, and he was.

An hour later, I drove up to the farm with the invoices from our morning shopping.  Moise was away.

As I pulled in, I saw another car by the kitchen. I heard an explosion of “Jon Katz, Jon Katz’s,” and the kids – about seven of them, big and small, came bursting out the kitchen door and were swarming all over my car, saying hello, welcoming me back, asking how it went.

Young Joe leaned his head into the car and held my hand. I’m getting you a size six boot, I said. He looked around and said quietly:  Could you get me a size six? he asked. Even that is a little large, he added. I had anticipated this. After Moise left, I bought him a size ten and Joe a special size boot:  6 to 8.5. If he wore thick socks, it would be perfect for the next two years.

The girls swarmed the car and carried out anything for them – a big bag of Hershey bars, invoices for the donut boxes and the pie pans, a book on Amish and Mennonite cooking. The parked car turned out to belong to English friends who knew the family in Canton, where they came from. Barbara and Moise talked about them all the time.

They came over to me and introduced themselves. I like them very much. We talked for a half-hour, me sitting in my car and unable to stand up. Like me, they are hospice workers and volunteers. Like me, they became good friends of the Millers, and we made plans to have dinner when they came up next – they were just passing by. We connected on so many levels.

“It’s great to see you,” they both said to me. “Barbara and Moise love you; they call you their good neighbor, and they talk about you all the time,” the husband said. I told them I had also heard a great deal about the two of them.

It’s hard to describe the feeling of warmth, connection, and trust I feel up on that hill with the people Maria calls my “other family.” The kids were very excited to see me and gave me hugs and pats, and smiles. Everyone seemed to be yelling, “Jon Katz.” They were all grinning ear to ear.

I could see that they had been worried about me, and I knew I was wrong to stay away from them for six days; I thought I was doing them a favor, I was not.

That is not a fair or decent thing to do to children.  I need to trust the good faith and open hearts of people.

My therapist tells me I fear being loved or letting people get close; I see these kids breaking through that old and creaky wall. If you assume nobody loves you, you can become the prophet of your destiny. I know.

I told them I could make fast car runs in a day and maybe bring some pizza or ice cream later in the week. Lena leaned over the side of the car, smiling. ‘Grandpops,” she said, “would you have any idea who came by and left that green bread and vegetable stand out in the foodshed the day before your surgery?”

“Lena, my dear,” I said. “I know nothing about any green vegetable stand; I wouldn’t know one if it hit me on the head. I think there’s a gremlin watching over you.”

She turned and smiled, “oh yeah!” she said.

I waved goodbye to their Canton friends and told Barbara we could settle the purchases tomorrow.

As I drove away, Joe came running alongside the car. “Jon!” he said, “don’t forget how much we hate broccoli on our pizza!” I won’t; I said, “I’ll just order it on each half,” and I drove off.