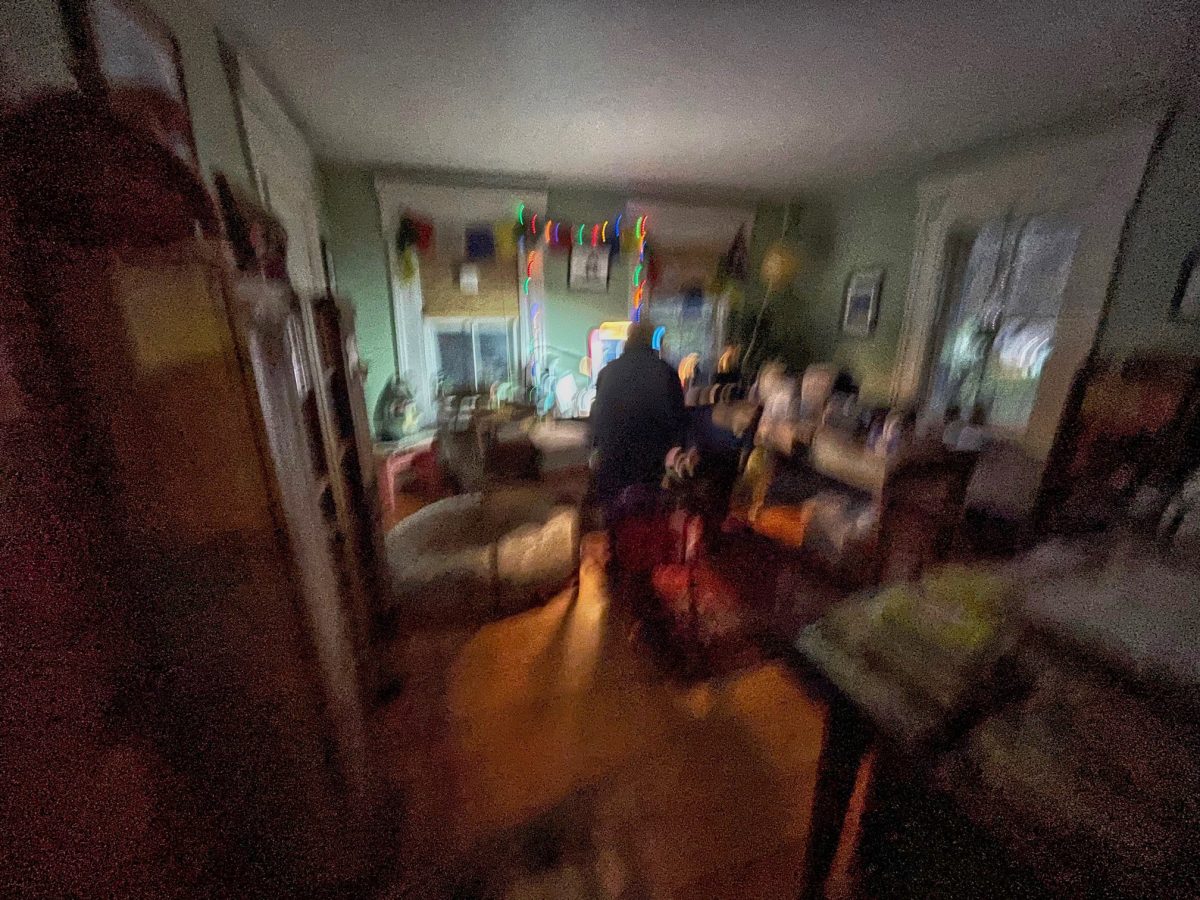 (Moise in my study. Yes, I wanted the photo to be out of focus, just like we are.)

Moise came over to ask me to buy a train ticket for him to Syracuse, N.Y. for tomorrow.

He came into my study – there is a red chair there always for him – and put it in front of my computer, as he always does.

I then realized with some horror that he was almost certainly looking at an e-mail message I had just received from an enraged nurse suggesting I was a murderer for coming anywhere near Moise and his family while there was a Covid-19 epidemic.

While I was in the kitchen, he started reading.

I did move quickly.

“Moise,” I shouted, “wait for a second,” and I stepped in front of him and got my browser quickly over to the Amtrak Web. Here was a moment when Covid, Amish values, me, our friendship, the poison of social media, the American dilemma, and the Internet all came together.

I know Moise saw some of it, but I didn’t know how much, and I wasn’t sure if he knew what it was. He was staring at it.  Moise is hyper-vigilant and doesn’t miss much.

He came over in his buggy just after dark. I now know the sounds of his horse calling out to the donkeys, who seem to like him more and more each day—those girls.

He wanted to thank me for dropping off some pizza at the farm, and he asked if I could buy a train ticket for him online, which I often do.

He had to go away for five or six days. It felt like a sudden emergency to me, and he looked drawn, even ashen. I didn’t ask what was happening; he didn’t say. I was still shaking my head over that e-mail.

I am his go-to ticket person; I can even navigate Amtrak’s website now, which is no small thing. Moise can look at the site, but he can’t go on it or use it directly.

Moise is careful to take his boots off on the porch when he comes, and he waits at the door until I appear. His horse is always tied to the big red barn.

The dogs rush out to greet him, Bud tries to drive him off, jumping up and down, and I had to tap his butt with my foot to get him quiet and away.

I had the e-mail I was pondering up on my computer; it was from a nurse-driven nearly out-of-her mind by Covid-19 denier and anti vaccers. She has seen a lot of them die, I suspect, clinging to suspicion and lies.

If Moise read it and grasped the content, he never said it, and I never mentioned it again.

The enraged nurse had written before expressing shock that I was coming anywhere near the Millers; she presumed that, like other Amish, they were not vaccinated.

She was essentially accusing me of being a murderer, happy to kill the family so that I could write about it.

“I’ll be interested to see how you feel when they get sick, and it’s your fault,” she wrote. “Especially the kids. And they’ll leave it in God’s hands until they get sick, which they will; it’s just a matter of time. Then they will want science to heal them. I’m stunned at your level of irresponsibility. I thought you cared about them. You don’t. Keep putting them at risk because it gives you something to write about.”

It was a hateful message from a health care worker, even by the shallow standards of social media. And it was no way to persuade people about anything.

Yet, I sympathized with her.

I’ve talked to several nurses devastated by the people they treat who essentially commit suicide rather than believe doctors, scientists, and government leaders. I’ve been present as the anti-vaccination zealots scream at nurses and receptionists and threaten them.

My letter writer was right to be worried about the Amish. It wasn’t that everything she said was wrong; the way she said it was so far over the top that she had lost any perspective.

There are numerous cases of Covid striking Amish families in Ohio and Pennsylvania, I’ve not heard of any here, and Covid has almost entirely vanished here. I have two vaccinations and a booster. I know that doesn’t keep me from passing the virus along to unvaccinated people. I just thought I should mention it.

What, I thought, were the odds of this happening, of his walking into my office while this message was up on the screen; I am amazed at how many people find reasons to hate the Amish rather than understand them. And I know many people also love and admire them. But the hate mail I get about them seems boundless and often wholly irrational.

Moise doesn’t go online and read e-mail, and I doubt he knows most of the negative messages I’ve gotten. He is aware; I know, that I have been criticized for writing about him. and our friendship.

I’ve been accused of being an abuser, a patriarch supporter, a white male of privilege,  an obsessive, even an enabler of child abuse. This is the first time I’ve ever been called a probable murderer.

I won’t use the nurse’s name in the hope that she has some perspective and decency, also because I have genuine empathy and pity for her. She doesn’t need any more trouble.

I have great admiration for nurses, and I can completely understand how the fact that violent idiots are threatening them all the time could wear anybody out. I can’t bear to fight with one, not right now.

Moise has many friends and visitors here and travels all over the town and the country. I’m not sure why she singled me out as the callous killer.

Thousands of people could transmit Covid-19 even up here, where social distancing is a way of life.

“If you infect Moise,” the nurse wrote. “it will tear through their unvaccinated community., there will be fatalities. How will you feel if you cause this? It’s not in God’s hands as they believe. It’s largely in yours. Stay away from unvaccinated people! It’s the responsible thing to do. From an exhausted Covid caregiver.”

It is a genuine and almost insoluble issue. We are degenerating into a nation of zealots; each one licked eternally into hatred and bitterness towards the other.

I should say that I have no idea if any family member has been vaccinated; it is not prohibited.

I have discussed vaccinations with Moise, and we have talked openly about it. I’ve discussed it with Barbara and the children.

I will not here or anywhere reveal the nature of those discussions, they are not anyone’s business, not even the exhausted Covid nurse caregiver. Covid has exhausted me also, and I’m not trying to treat anyone for it or been around any of the victims.

Nurses are so very human, and right now, so very vulnerable. The doctor’s offices I have been visiting lately have all-new posters warning that violent speech, abuse, or violence against doctors and nurses and staff will not be tolerated—what a troubled country we are now.

I got Moise his ticket to Syracuse (he’s going much farther); he was pleased it only cost $32. He paid me back on the spot. Afterward, we sat in my darkened office and talked for a while.

I told him he looked exhausted and asked him if he was all right.

Moise talked about the many tasks he had to understand, his plans to keep his crops safe over the winter, the challenges of building yet another house in the winter. He had a lot of his mind, I could see. And he was exhausted.

I was upset by “A’s” letter; it was especially and intentionally cruel. But it was hard to take seriously.

I deleted the first one and didn’t post the second one. She just went too far, even though many people would agree with her.

Moise is the first friend I have ever had to defend, and he is such a lovely and peaceful person. Sometimes, life is so strange. He is devoted to his family and works his heart out for them every day. If he is not vaccinated, I hope he knows to be careful.

He wears a mask almost everywhere he goes, and I gave him two for the trip.

But hate is just a rallying call for me to be good. I’ll find a way to make it productive.

Moise and I both have to make our own decisions about life, for better or worse, and that includes the pandemic. I have decided to take every precaution over Covid that I can take.

I don’t know what he has chosen to do. It’s not my business.

And, of course, I will never walk away from Moise unless he asks me to or tells me to.

I hope it goes without saying, yet I think it needs to be said.

To the exhausted nurse, I wish you healing and support. You are among the angels among us, perhaps a fallen one.