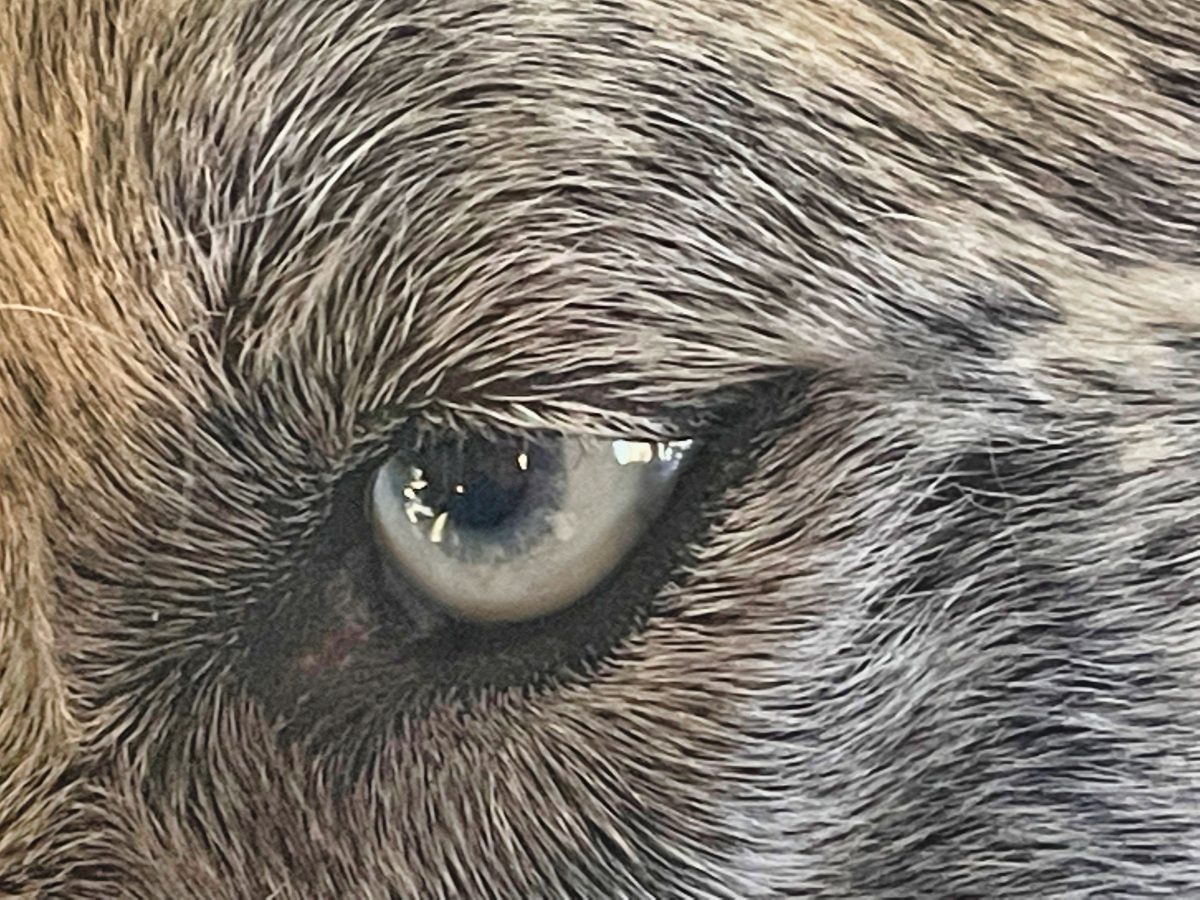 Fate has been with us for years now, but I’ve never been able to get her to sit still long enough to get a really good close-up of what I thought was a Merle Gene eye, something gives remarkable character to her face.

Fate has a blue eye, I always thought it was a Merle gene,  but I learned this morning that this isn’t so, a blue eye doesn’t mean she’s a Merle dog.

I got this message this morning from Heather, a knowledgeable border collie lover and sheep herder who is familiar with Fate’s line.

“Hello, Jon. Fate actually is not a merle and has no merle genes at all—I know her lines well… Blue eyes in border collies are not always caused by a merling pattern, as they aren’t in Fate’s case. She is a predominantly white border collie with a lot of ticking, not a merle.”

Wow, that is good to know.

This morning, Fate jumped up into my lap for our daily head-to-head communing and she actually remained still for a few seconds. My Iphone was as quick as her for once.

Fate’s leflt is eye is bluish. A blue eye is often called a Merle Gene eye in dogs, but Fate doesn’t have that condition, I learned a few minutes ago.

The Merle gene is a recessive genetic gene that modifies the dark pigment in the eyes. Merle causes random modifications in a dog –  both dark-eyed, blue-eyed, and odd colored eyes are possible. Pigmentation in the dog’s paw pads may also be modified by a pink coloring.

But almost always, merle dogs are just as healthy as dogs whose eyes have a solid color.

Fate is a remarkable dog, bright, athletic, healthy and smart. She’s also quite a character. She opens doors and my fear is that she’ll get hold of human tools and take the kitchen door off. The coloration in her eye has always given her a special personality to me.

Perhaps she is too smart to want to push the sheep around, she just wants to hang out with them. She has tons of instinct, and would make a terrific agility dog, Maria and I aren’t agility work but Fate she does all kinds of acrobatics out in the pasture and walking with us.

Until today, Maria and I both thought her a merle, and so did every vet who examined her. I’m glad to learn otherwise.

I’m happpy to have finally got a worthy picture of her blue eye, Merle or not. It doesn’t matter to us, but it’s good to know.

(Note: this piece was corrected from an earlier version to reflect the fact that has a blue eye, but is not a merle. Thanks, Heather.)