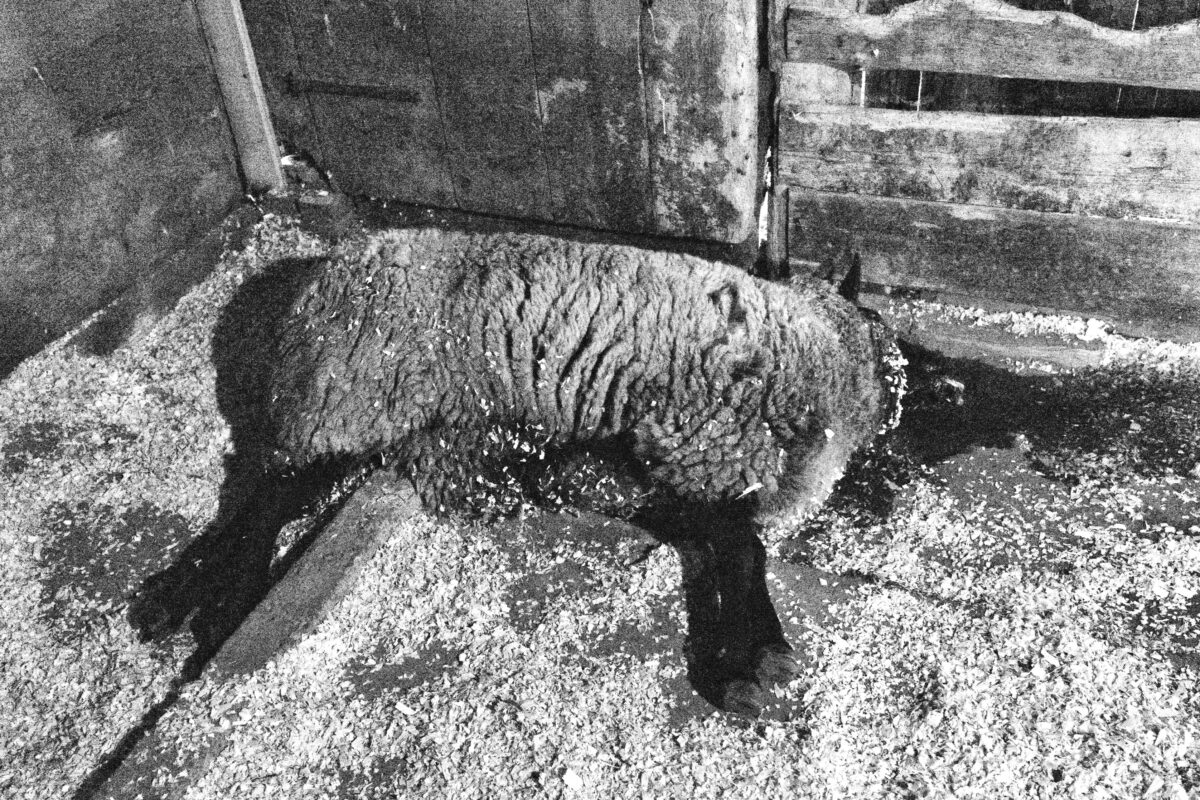 I was taking a shower. Maria knocked on the bathroom door and said, “Pumpkin is dead. I just found him lying on the barn floor.” We’ve lost a scare of animals here on the farm, and we can handle it. Death is one of the many lessons we’ve learned on our farm. All animals cannot be saved, and some should be allowed to go in peace.

We did have reason to hope for Pumpkin, we tried everything we could think of and everything the vet recommended. But sick sheep, in my experience, rarely make it through. Perspective is important. Pumpkin looked grim to me, he barely moved, paid no attention to food or to the other sheep. He improved a bit each day, but not much.

By yesterday, I wasn’t hopeful.

Maria went back and sent me the piece she wrote about his birth on her blog.

Here is an excerpt. We’d had some births which went well:

“It was a different story for Socks and her lamb (who we named Pumpkin). In the morning I saw that Socks kept wandering away from the flock. I don’t really know what exactly to look for, so I just pay attention to anything that looks different. Seeing Socks wandering around alone made me think she might be looking for a safe place to give birth.   When Jon and I checked on her about an hour later, she was laying in the pole barn panting and pushing. I could just see the smallest hoof coming out of her. She was pushing and each time she pushed more of the hoof was visible, but then would quickly disappear inside of her again. This went on for some time before a tiny nose started to appear. Socks was clearly struggling and I kept wanting to try and help her, even though I didn’t know-how. Jon and I watched for progress and each time I asked Jon if we should do something he said not yet.

I  now know that making the decision of when to step in and help is part experience and part intuition. At some point, Jon just went into the barn and put on a pair of long plastic gloves. So calm he was, so confident as he started to gently pull the head of the lamb out of  Socks. Once his head was free, the rest of him slid out easily.”

I appreciate what Maria wrote, that was a special experience, and Pumpkin was a special sheep. When you pull them out like that, there is a special bond that never breaks.

We live on the boundary between having pets and having farm animals. They are all a little bit of each. In our country, a lot of pet people believe that their animals should be kept alive at all costs and by any means. They often find the idea of putting an animal down to be horrific and cruel.

People on farms can’t keep animals alive in that way,  they wouldn’t last very long. Animal health care is very expensive. And a sick animal can destroy a flock in a flash.

I could tell that our vet Jack Kittel, didn’t have the sense that Pumpkin would pull through. He only charged us $40 for the visit, and he gave us a bunch of ideas. But he didn’t look too hopeful. I’ve owned sheep for nearly 20 years, and I don’t t think more than one or two sick sheep ever lasted more than a week.

They’ve been around humans for thousands of years, but there is much we don’t know about them.

Maria is a different person from the one who wrote that blog post. She is strong, calm, experienced, and has wonderful intuition. She knew exactly what to do and what to try. She didn’t need much help.

On a farm, death is life, not drama or tragedy. If you can’t handle it, a farm is not for you.

We called Mike Conklin, and he said he could come and place the body somewhere the animals of the forest could find it. We went out to the barn, rolled Pumpkin onto a big blue tarp, 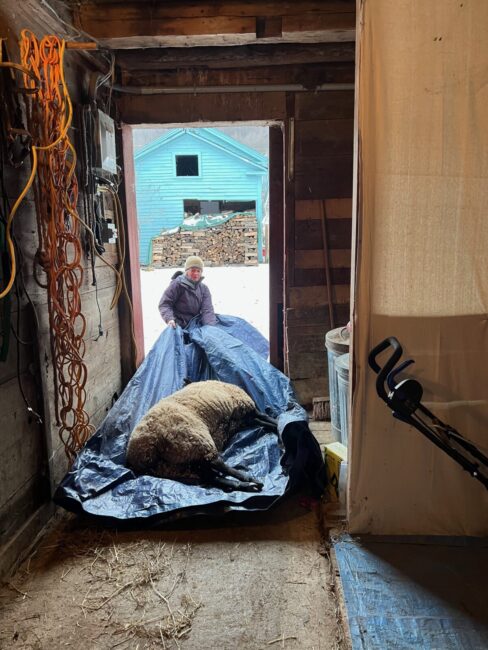 and dragged him out of the barn, so Mike could get to him easily. Mike had to pull some hay bales on top of one another to get Pumpkin up and on the truck.

We said our goodbyes and Pumpkin is gone.

We both gave one another a hug and said okay, let’s get to work. We did everything we could, and that is enough.