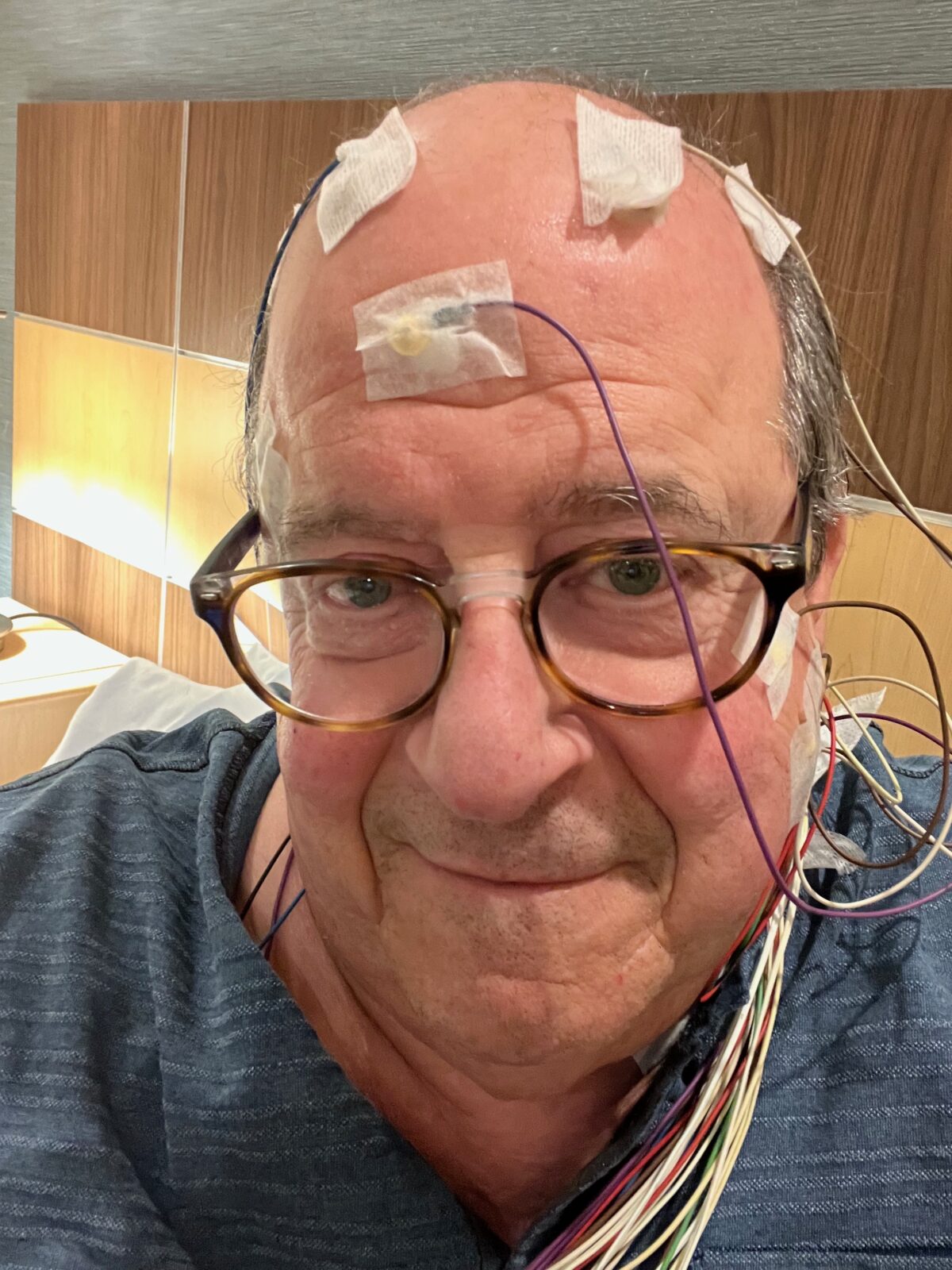 Amid our self-imposed Covid lockdown, my overnight trek to the Sleep Lab was a very productive adventure, a journey into the deepest parts of me.

I learned a lot about the sleeping part of me.

I’ve had sleep issues all of my life, and the Sleep Lab has been turning that experience upside down over the past few weeks. I’m very grateful for that and very happy with the results. They are transformative

. I’m learning how and why. I see there is more work to be done.

Last night, I went to sleep in the Lab at 10 p.m., all wired up and looking like something Captain Kirk might want to transport to another planet. I was awakened at 5:30 a.m. to get ready to be picked up and taken home, and after getting a detailed account of just what goes in my body when I think I am still and sleeping.

My night in the Saratoga Hospital Sleep Lab turned out to be fascinating, a  profound look at how me and my body sleeps and what that means to the heart and almost every other organ. There is an awful lot going down in there.

It was a window into my interior self. And a big step towards a healthier life.

The lab is on the second floor of a Saratoga Hospital building, there are about eight rooms where people can go to sleep and be studied.

Melissa was my tech, observer, and guide for the night. She was beautiful, welcoming, honest, and insightful. She had a great sense of humor and a clear and entertaining way of explaining what was going on.

I learned for the first time what sleep apnea is, and before the visit ended, I had a new mask and am expecting a new machine.

The purpose of the visit last night was to gather precise data so the Pulmonologist could make sure the mask and the settings were the right ones for me.  I’m doing well. Before I got my sleep apnea mask, my pulmonologist shocked me by saying I’d been breathing for up to 30 seconds 80 times an hour. My poor heart.

Now, it’s down to once or twice a night. We’re closing in on zero.

But the doctors say they need to know much more about how I sleep and how my body reacts so that my mask and the machine that operates it can keep me breathing, sleeping, and safe. The heart and the body need to rest at night, and there was no rest for either on my many sleepless nights all through my life.

Perhaps my heart will finally have a reason to appreciate me.

So all night long, Melissa watched me on the room camera and monitored the findings and results of all those wires and all that data, all of which is now in the hands of my pulmonologist, who will decide just where we go from here.

By morning, she knew an awful lot about Sleeping Jon, including the odd fact that my right foot moves back and forth all night. That’s why my surgical boot kept falling off, and it is also why I wake up with my socks everywhere but on my feet on cold nights. A life-long mystery solved.

The room was pleasant but spare. Two small tables, one on either side of the bed, a sofa, and a bathroom but no shower. It is made for short stays, and only one activity, sleeping. I brought a novel and my music. I had the music on all night but never got to the book. I had about 30 minutes of spare time, I listened to music and talked to Maria. And it took a while to hook me up with all those wires.

Every time the mask leaked or I rolled over on the air tube, Melissa would appear and straighten things out, and we tried several masks of different sizes until we found the right one. She liked my musical choices, in this case, Paul Simon and Roy Orbison and an Apple Music mix of Gregorian Chants. The music helps me quiet my mind down and get sleepy. 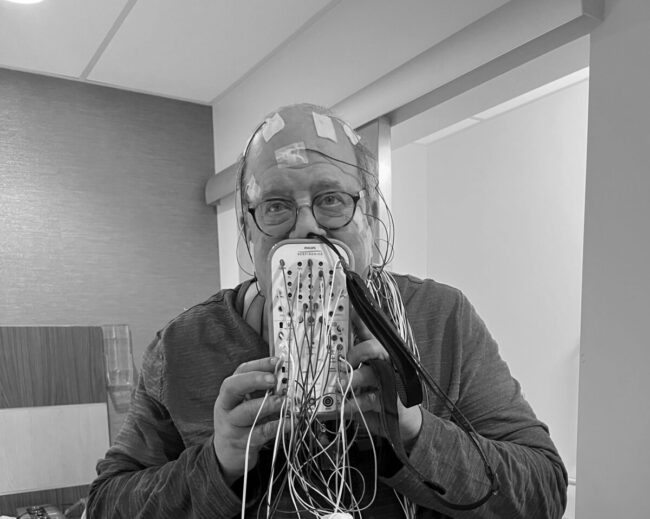 There were cameras and microphones to film me operating all night, to measure every external and internal movement, and monitor the sounds I might make as well. They even kept track of how my eyes were moving.

To speak with Melissa, all I had to do was raise my arm, and she would show up in seconds. I should say that during my first night in the Sleep Lab last year (Marissa reminded me of this), I got up frequently to go to the bathroom. Last night, I got up once.

This time, she was able to tell me a lot about my body and what it does when I sleep. The doctors will analyze the new data, and I’ll meet with them shortly to discuss it. I slept deeply and well, although, on occasion, according to Melissa, my mouth would open wide (it happens apparently) and cause some leakage in the apnea mask, which would wake me up. Melissa brought me a mask with a wider mouth, and the problem seemed to go away.

I had this notion that little was going on in my body when I slept, but it’s actually quite a festival in there, lots of parts moving, starting and stopping, and reacting to an alarmed and sometimes frantic heart.

I was happy Melissa got such a good look at my sleeping life; it was so much easier to talk to her about what I might need. For example, the air machine I now have does not have a heater in the humidifier, which pumps some moisture into the nasal system to keep it from going dry. But when it gets cold in our bedroom, the air is ice cold also, and that freezes my nose and wakes me up, and not pleasantly.

Melissa said she would ask the doctors to get me a heated air machine, like the one I was using at the Sleep Lap. It was so much more comfortable, and I slept so much more deeply and easily.

The rest of my body, including my bladder, was convinced I was having one heart failure after another, sending adrenalin shooting out into my bloodstream time and again. Instead of resting, as hearts are supposed to do when we sleep, mine was in a perpetual freakout all night.

She had me change into my sweatpants and t-shirt and came in to wire me up.

Every part of me was wired – ankles, legs, chest, neck, eyes, head, face, arms, and even my finger was wired up and taped to check my blood oxygen level.  There were 40 or 50 different wires going in and out of my body.

She said she wouldn’t plug me in until I was ready to sleep. In the meantime, she explained sleep apnea to me in a way I finally understand. Think of diving into a pool and holding your breath, then coming up for air and gasping for breath. That is what my lungs were doing 80 times an hour, throwing the heart out of whack and upsetting most of my organs.

Maria was waiting for me at 6:30 and I came home with a bag of goodies from Melissa – tubes, masks, pamphlets. The doctors should be ordering the new equipment for me shortly and I don’t imagine I’ll be back in the sleep lab soon, or even at all. 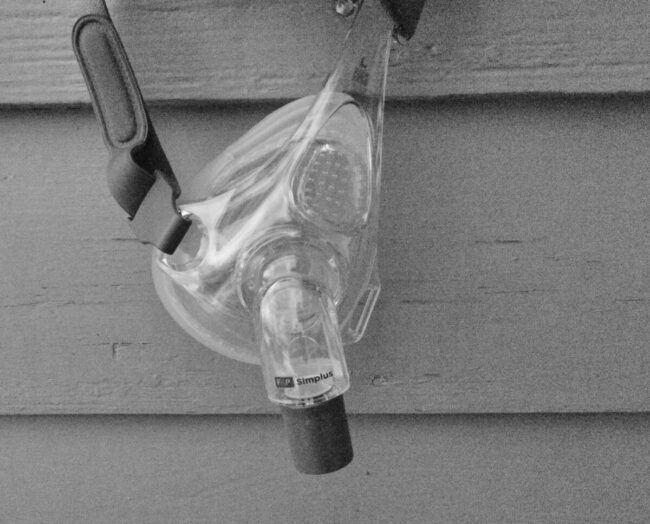 When my urologist suggested I had sleep apnea a couple of years ago, I blew him off. I don’t want to wear a mask all night and look like Darth Vader in front of Maria. He just smiled and said nothing. Maria doesn’t mind my mask at all, except when it blows cold air on her. She says she’d much rather that I wear a mask than call an ambulance in the middle of the might.

I’m tired, it isn’t that restful sleeping in somebody else’s bedroom, especially hook up to so many wires. And I missed Maria. I’m fortunate that this technology exists, it might very well have saved my life. and given me more years to live.  And finally, after decades of sleep deprivation, I am actually sleeping 6 to 7 hours a night. There are lots of lessons to be learned in this for me, but I don’t have as much time to think about it, I’m too busy sleeping.

Thanks, Merissa, for this strange but oddly wonderful night out.