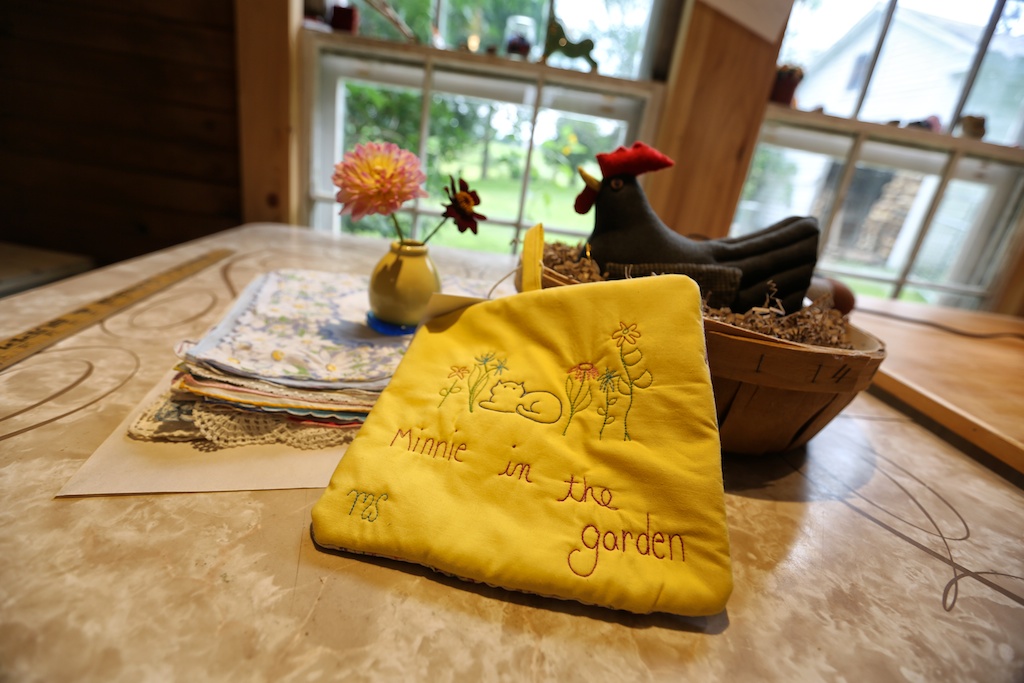 People who are coming to the Open House Sunday are curious about what is being sold in Maria’s Schoolhouse Studio and people who can’t come would like a peek and a preview, fair enough. I’m putting an album up on Facebook. The studio looks great, Maria is in her element, conjuring up tags, positioning things, re-arranging her studio.

Above from the left:

-Kim Macmillan, who works with Maria putting together her fiber works will be in the Studio doing something interesting. People can choose their scarfs from vintage hankys on the table and Kim will assemble as many as she can during the Open House. So you can create your own scarf and watch it being made.

-To the right is one of the new potholders Maria has made “Minnie In The Garden.” Maria’s potholders have become somewhat more topical and she is increasingly inspired by the animals on the farm, who she sees every day. A number of her potholders and pillows on sale are inspired by Bedlam Farm animals.

-Behind “Minnie” is one of artist Jane McMillen’s new Hen Doorstops, she has large and small hens with adoption certificates, they are great, we bought one for the mantlepiece. Mara is selling one of my photos – “Queen Flo” for $150, and some signed Bedlam Farm notecard packs for $15. I am putting up some of the other good stuff – great art cheap –  onsale on Facebook. More details about the Open House and the art on Maria’s website.