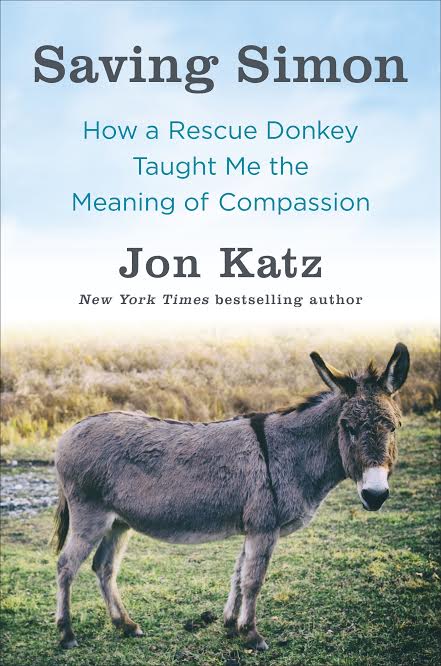 The first review of “Saving Simon: How A Rescue Donkey Taught Me The Meaning Of Compassion,” came in yesterday, it was from Kirkus Review, a prestigious place that alerts publishers and bookstores and movie people to special books. It caught the spirit of the book beautifully, and in several different ways:

Another chapter in the life of Bedlam Farm. Well-known for his stories about his dogs, Katz (Who Speaks for the Carriage Horses: The Future of Animals in Our World, 2014, etc.) now writes about a new animal who unexpectedly entered his life, Simon the donkey.
A victim of animal abuse, Simon was rescued from certain death by animal control officers and the local police. Harbored in an old hog pen, with wooden pallets his only protection from the rain and snow, Simon was stuck up to his shoulders in mud and his own manure, covered in rat bites and lice, and not expected to live through the night. Delivered to Bedlam Farm, Katz and his wife, Maria, poured their love and kindness into the donkey and administered to his wounds on a daily basis. In return, “Simon came to life in stages, slowly, unfurling like one of those slow-motion videos of buds opening in the spring.”
The invaluable lesson Simon taught Katz was compassion, for not only the animals he encountered, but also for the men and women in his life, including the farmer who abandoned Simon to his fate in the hog pen and Katz’s mother, who had emotionally abandoned Katz during his childhood.
Full of reflections on the interactions, both physical and emotional, between animals and humans, Katz’s story revolves around Simon and includes the moments when old dogs die, the arrival of a new border collie and the slow integration of a blind pony into life at Bedlam Farm. More introspective than previous stories, perhaps reflecting his desire for a slower pace in life, this book handles the emotional highs and lows of living with animals with empathy and thoughtfulness, forcing readers to re-examine their own meanings of compassion and mercy. A heartwarming tale of rescue and redemption.
The book will be published on October 7, and Simon and I will be doing a joint signing together at the second Bedlam Farm Open House on Columbus Day Weekend at Bedlam Farm, one week later. I’m going to fence off a corner of the yard and Simon and I will sign the books alongside one another – bring carrots.
In fact, we are thinking of honoring Simon by calling the Open House the “Saving Simon Open House,” he is a wonderful symbol for the spirit of the farm and our hopes and wishes for it. Simon, as the review says was saved from near death by the police and brought to our farm, where he has healed and thrived. I wish the people who think the Carriage Horses In New York were abused had been here to see Simon when he arrived, that was what abuse it.
I’m excited about “Saving Simon.” People can order and pre-order the book from Battenkill Books, my local bookstore and I will sign and personalize any copy purchased there. Connie has ordered 1,000 copies of “Saving Simon” and I mean to top that. You can call the store at 518 677-2515 or e-mail them at [email protected] They take Paypal and ship anywhere in the world. I might do an early Sunday book signing at Battenkill Books doing the Open House weekend also.
The Open House is meant to embody the spirit of Bedlam Farm – encouragement and creativity. Maria and other artists will be selling art, I’ll be doing sheep-herding demos and guiding people through donkey tours. The donkeys love Open Houses, they get lots of carrots and hugs. Details on Maria’s website. In addition, a large group of people from the Creative Group At Bedlam Farm on Facebook will also be coming, they are warriors for creativity and encouragement. More later.