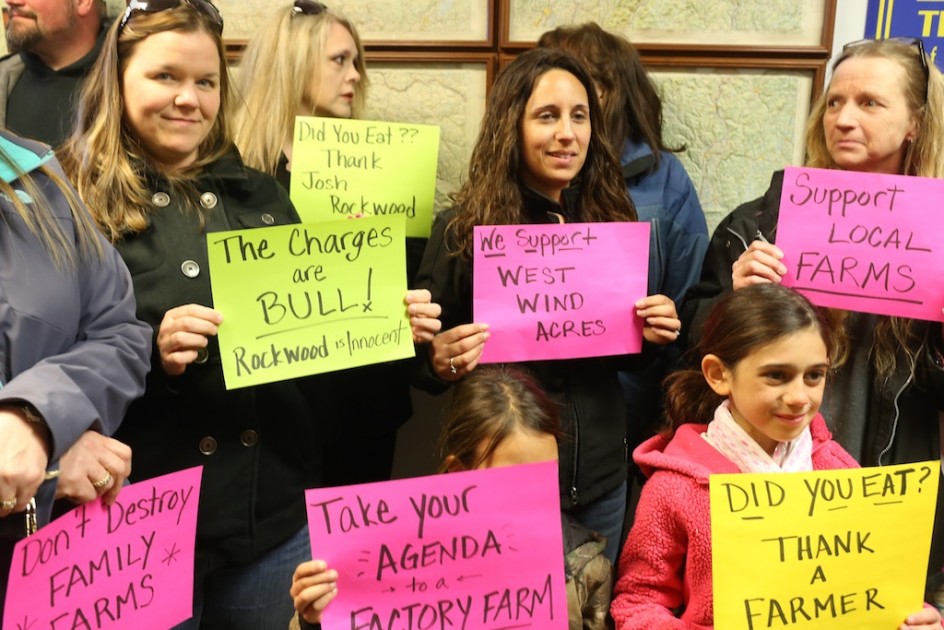 In just a few days, he has raised the $16,000 he needs to prepare and improve his farm for the winter. I imagine he will end up with more than that, Joshua is important to me and to many other people. He is a humble and brave man, he has won a great victory for truth, justice and community. Champagne tonight on this farm.

This is the second true victory for the rights of animals and people in just a short time. Last week, the unthinkable happened in New York City, the mayor dropped his ludicrous effort to ban the New York Carriage Horses. Joshua’s ultimate victory might be unthinkable to some people as well. I believe it will happen.

Just after noon, the fund passed $16,000, his goal, and I am proud to celebrate. This is the sixth day of the funding project, I suspect will continue to rise, 371 people have contributed so far from all over the country.

“Joshua, I am a vegetarian and have been for 41 of my 58 years,” wrote Leslie Exeter, who donated $40 this morning. “However, my respect and regard for animals transcends that personal choice. People like you – who raise, care for, and house animals humanely and appropriately, in as healthy and natural an environment as possible and with the utmost regard for their well-being, even if for the meat they ultimately provide – deserve my respect and support as well. Good luck to you and to your family.”

Aleen Thomas donated $25 and wrote: “Could have been me – horses lived out 24/7. They stayed healthy until late 20s-early 30s and I stayed healthier tending to them and breaking ice/hauling water in the winter . . . thoughts are with you. Keep looking forward.”

Joshua did not win a victory for the “left” or the “right” in his successful and ongoing gofundme project. He won a victory for the idea of treating people and animals with respect and dignity. And for the beleaguered farmers of America. forgotten and abused.

Nearly 400 people from all over the country and from every part of the political spectrum donated small amounts of money to help him buy the tire tanks of water and eco-friendly Greenhouse Shelters he needs for the winter and has painstakingly researched and chosen for his farm, West Wind Acres.

Conservatives and  liberals alike – farmers, housewives, ordinary people, farriers and truckers,  horse and dog animal lovers – bristled at the heavy-handed overreach of the police and local government in their disruption of his life and livelihood, and at the Orwellian contempt for human rights shown by the people who claim to support the rights of animals, but do not. It is not progressive to take away the freedom and property of innocent people in the name of loving animals.

When I step back and think about Joshua Rockwood and his story – hard to to do because I cannot claim to be completely objective about it any longer – I think it is really a story about how Americans no longer really know one another, and the institutions who govern and police our lives do not know us.

Animal rights activists have sharply criticized me for not respecting the decisions of law enforcement and animal rights police in this case, but the real difference between them and me is that I know Joshua Rockwood. So do the hundreds of people who have come to his hearings and supported him. They are correct when they say it could have been us, and it will be us if this witchhunt and hysteria over so-called animal abuse is not stopped.

I hope the people who persecuted Joshua in such a cruel and unthinking way never know the awful experience of having one’s home and farm invaded by the police and various strangers who claim to love animals but seem to know nothing about them.

His work on his farm, his life and family, his peace of mind have all suffered or been shattered by this unwarranted ordeal. Three of his horses were seized – in my mind, stolen would be a more accurate term – and are now being held ransom for tens of thousands of dollars. I don’t know if they will ever get back to him.

The American experiment – our Revolution – was, in so many ways, an experiment in community. Our legislators were us, we lived side by side with the farmers who fed us, we lived with the animals who worked with us, our police and prosecutors knew us, what we were like. Our laws were passed by neighbors and fellow citizens, they reflected our needs and concerns.  That isn o longer true. The secret informers who nearly ruined Joshua’s life did not know him or meet him or have the courage to look him in the eye, the police were strangers, the animal rights activists who supported his arrest did not know him or his animals, had no idea what he was like.

One of the most interesting realities about this case is that no one who does know Joshua believes he  mistreated or neglected his animals. No real farmer in the world would have arrested him for having an unheated barn and frozen water in temperatures that fell to – 27 degrees. Hundreds of farmers have sent him money and driven long distances to attend his hearings. Neighbors, friends and customers have rallied to his cause – the most important testimony there could be.

His arrest and persecution is a profound failure of the justice system and local government.

Joshua’s community – Glenville, N.Y. – is a prototype of the new American community in so many ways. A fast-growing mix of new housing, surrounded farms and endless malls have created an ugly and prosperous mix, people do not care for farms. The animals sometimes gets loose, they smell the manure spread on the fields,  real estate developers drool over the land for new housing developments.

Joshua’s arrest was more like an invasion from an alien world than it was a justifiable exercise to protect animals from cruelty and abuse.

The real community emerged after his arrest to support him, raise $48,000 for legal fees and now, another $16,000 or more to help prepare his farm for the winter, and from the secret informers who seem to now be an integral part of our criminal justice system. If someone accuses you of murder, you will have the right to confront him or her in court. If someone accuses you of not having running water for your animals for a few hours in a brutal winter, you will not.

Joshua was arrested even though two separate veterinarians came to the farm to inspect his animals just before the police raids, both found them to be healthy, hydrated and well cared for. Every one of his hundreds of pigs, cattle, sheep and chickens got through the winter, not a single one died or was malnourished or seriously injured.

It is good and useful to know that social media can be used for good as well as bad, to support people as well as attack them.

Joshua is a good man, a loving father and husband, a conscientious and serious-minded farmer concerned about healthy food and Mother Earth. He does not deserve to be persecuted, or driven off of his farm by secret informers, animal extremists, and ignorant and self-interested ideologues. He is not alone, there are many victims of this new Inquisition.

It is a gift to be able to support him. He can thank you himself for your help, I wish to say that you all have lifted the spirits of many in the world and given hope to many people.

In the age of the billionaire SuperPacs, individuals matter. Community matters. Truth and justice matter.

You have all helped score a victory for all of those things. Thanks and admiration to you. A great and important victory.

Joshua can use every penny he receives.  You can continue to contribute to his fund here.