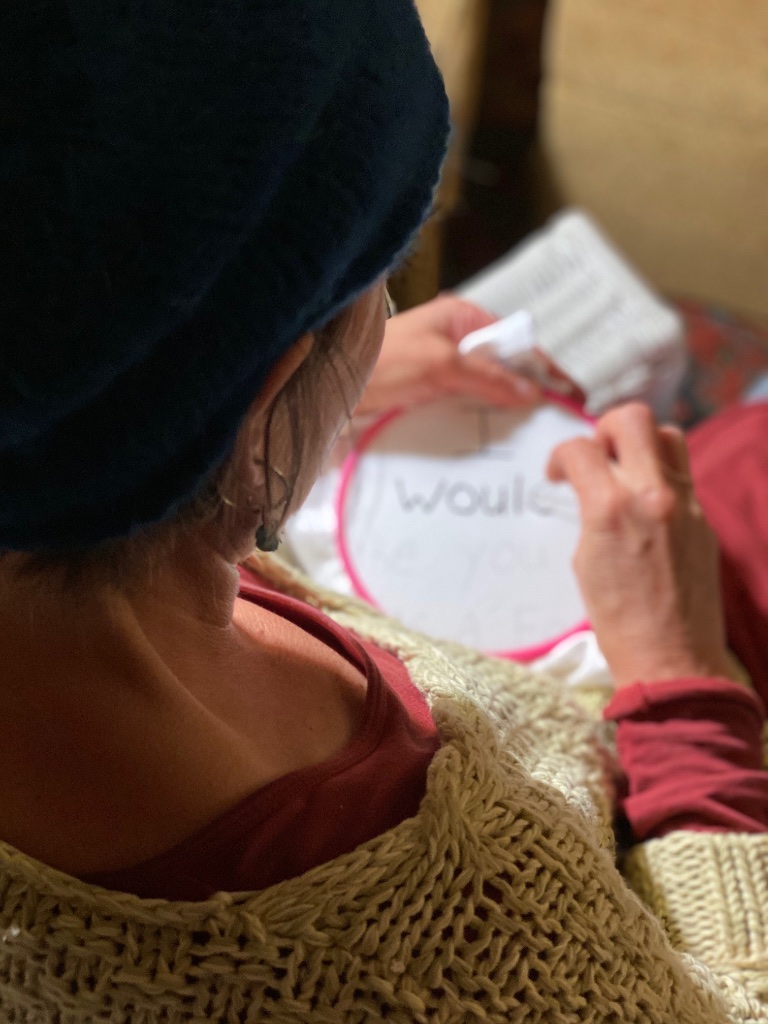 The ability of the human being to want more, to expand or change their lives, to be better, to create things is, to me, one of the things that often suggests the existence of a God.  Where else could this drive come from?

No dog or cat or chicken can decide to choose a better life, or choose to change his or her life. Only human beings can imagine that.

Why did Gandhi set out to free India?  Or Martin Luther King march through the South? Why did Mother Teresa wash the feet of lepers? Or Michelangelo stare at his chapel for years?

Why did Picasso or Van Gogh have to make art?  Or Gabriel Garcia Marquez write such wonderful books? Why did Jesus Christ choose to fight for the needy when it was so dangerous and lonely?

For that matter, and I am not comparing myself to any of those people above, why am I so drawn to working with the elderly at the Mansion or the refugee children at Bishop Maginn. I can’t say I know for sure, but I believe it is the Creative Spark described in the Kabbalah.

I’ve struggled with the idea of God, but the Creative Spark is the divine for me, I think, in a way that is God for me. Creativity – my writing and photography – is faith for me, perhaps that is why I dislike being told what to write. It isn’t that I am right, it’s that I am free.

This spark takes me out of myself and into the wider world in a powerful way.

What I saw in Maria – I remember it so vividly – was this spark, this yearning to come out of herself and fulfill her destiny. I also saw her bravery and determination in taking so many risks to pursue it. She was absolutely determined, as was I, to fill her life with meaning.

No other animal has this powerful desire to step outside of themselves and create a better world or capture the light and the color and meaning of life.

It is their imaginations that made human beings so exceptional, and it is their failure to imagine that make them so dangerous and self-destructive. This is why museums exist – they are the Temples and Churches and Mosques of creativity.

When people abandon the Creative Spark or let others persuade them to abandon it, says Joseph Campbell, then they lead a substitute life. Or, as T.S. Eliot suggested, they can become hollow men (and women.) I know what that feels like, it is so  easy to become frightened or disillusioned.

God said in the Kabbalah that he gave the Creative Spark only to human beings, and he warned people that the only thing they had to fear from him was failing to use or honor it.

Donkeys are happy to be fed and safe.  The can’t imagine more, so they don’t want more. Maria and I both wanted more out of our lives, and we have fought every day for that.

I sensed this drive in Maria when we first met, and this was one of the reasons I fell in love with her. She said I was the first person in her life to tell her creativity was sacred, important, wonderful. She sure doesn’t need to be told that now.

Last night, I saw her sitting in the living room embroidering another President Trump quote for the Tiny Pricks Project, the artistic resistance online, artists from all over the country choose their favorite quotes from the president in fabric and posting them on the Internet.

The site is seeking to make a creative and artistic record of the Trump era. They call it the “Material Record” of Trump’s Presidency.” Last night, she was embroidering one of his most famous recent quotes, this one to the President of Ukraine: “I would like you to do us a favor, though...”

The President doesn’t seem to pay much attention to artists, I’ve never seen him tweet against them, but I think he would do well to take them more seriously. Throughout history, art has turned intensely political and quite powerful.

Maria has already stitched six quotes on the site, and she has done a strong response to them. It’s right up her alley, a non-violent, non-argumentative creative statement of her beliefs.

I have always believed the Creative Spark is in all of us, and sometimes, as a teacher, I am lucky enough to light it in others. Mostly, it is what drives me and gives my life both love and purpose.