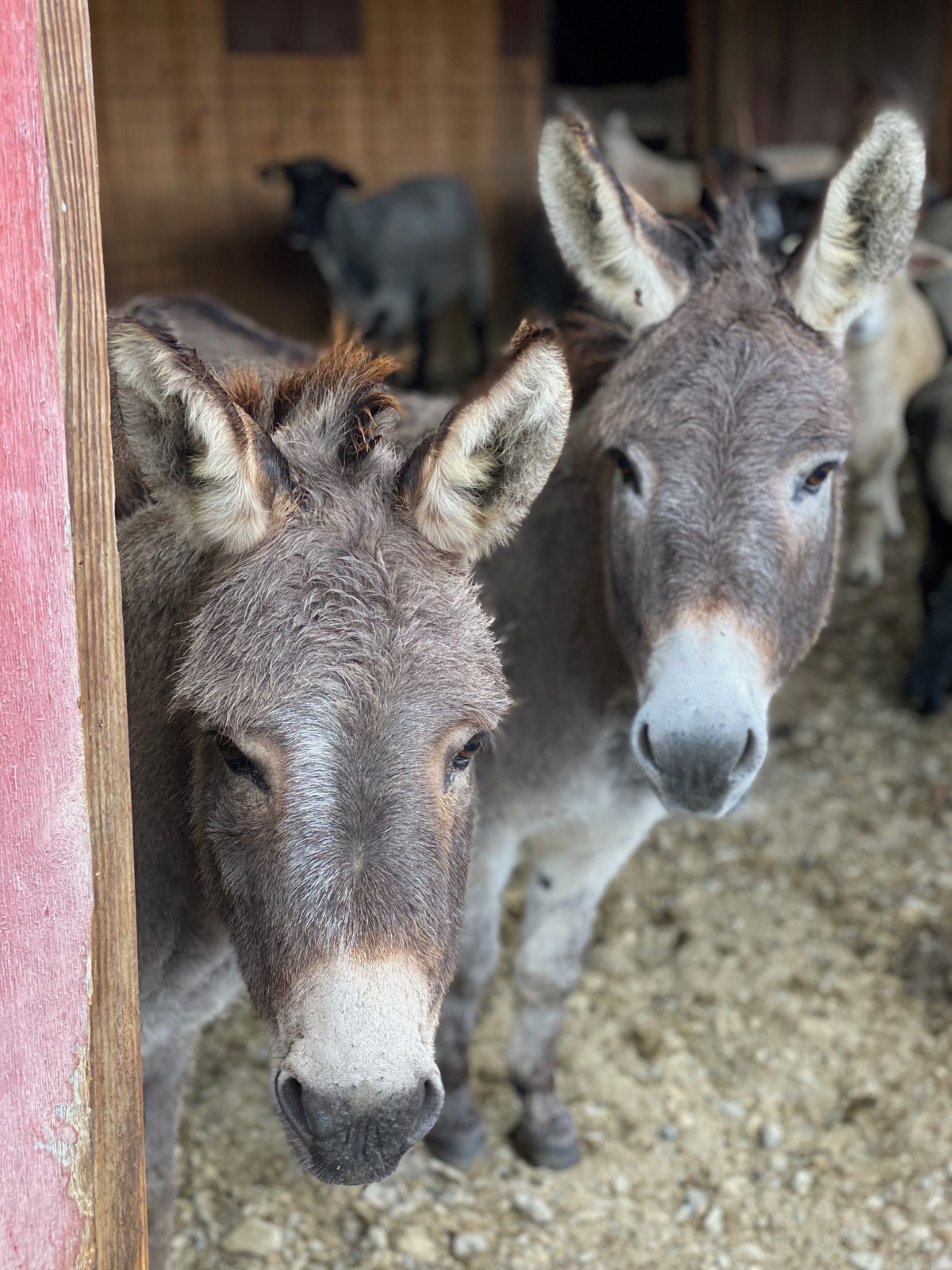 Donkeys are the wisest animals I know. From 100 yards away, the know my mood and intentions, they know when to leave me along and come up for a scratch. Maria and I both talk to donkeys, almost every day of our lives. They are the most remarkable animals I have encountered.

In one sense, the donkey is really just a domesticated horse. Donkeys have been used as working animals for at least 5000 years. There are more than 40 million donkeys in the world, most of them in underdeveloped countries, where they are used as pack animals.

Donkeys, a/k/asses, were first domesticated around 3000 B.C., probably in Egypt. Donkeys have worked with humans for millennia, they perhaps know people better than any other domesticated animal, including the dog.

In the poorest countries, donkeys live from 12 to 15 years.

In prosperous countries like ours, they may live to be 50. Our donkeys are guard animals, we got them to keep coyotes and stray dogs away from the sheep. We have never lost a sheep to a predator.

Donkeys have been abused, overworked, and otherwise mistreated by humans for many years. They know us well enough to be willful and careful around us.

I see donkeys as possessing an ancient kind of wisdom. You can’t get them to do anything that is unsafe or unreasonable.

They are affectionate without being pandering. Unlike dogs, they don’t live to please humans, humans usually try to please donkeys.

When Maria and I wake up and start talking to one another in the early morning, we heard the donkeys bray, from hundreds of feet away. Their ears are like sophisticated radar, scanning the world around them, picking up sounds nobody else can hear.

Lulu and Fanny, our donkeys, are sisters. I named Lulu after a close friend who stopped speaking to me about 15 years ago, I still don’t know why.

Fanny was named after my Aunt Fanny, a tough peasant woman from Russia with huge breasts and big black shoes.

She said the tragedy of  her life was when she and her husband Joe arrived at Ellis Island and a cousin who had come to America earlier met them and rushed to tell them the news: there was a new company called Pepsi-Cola and it was looking for someone with some food experience to run their New England operation.

Joe laughed. Even Americans, he said, were not so dumb or rich to buy colored water when the best freshwater in the world runs out of their own taps.

So he turned the job down and ended up running a hardware store in East Providence, R.I. Joe had made a big mistake. It would not be forgotten.

Every time Joe opened his mouth, Fanny was ready for him with the same line, and for many years: “Mr. Big Shot, he could have run Pepsi-Cola in New England, but he had to say now. Now he spends his days selling hammers and nails to the gentiles.”

Joe, beaten down relentlessly with that line, would only sigh and nod, there was really nothing to say that would placate Fanny.

So I named our donkeys after her. Fanny was larger than life to me, I thought she deserved to be remembered. I have to say Fanny the donkeys is a lot sweeter than my Aunt Fanny, but not quite as formidable.