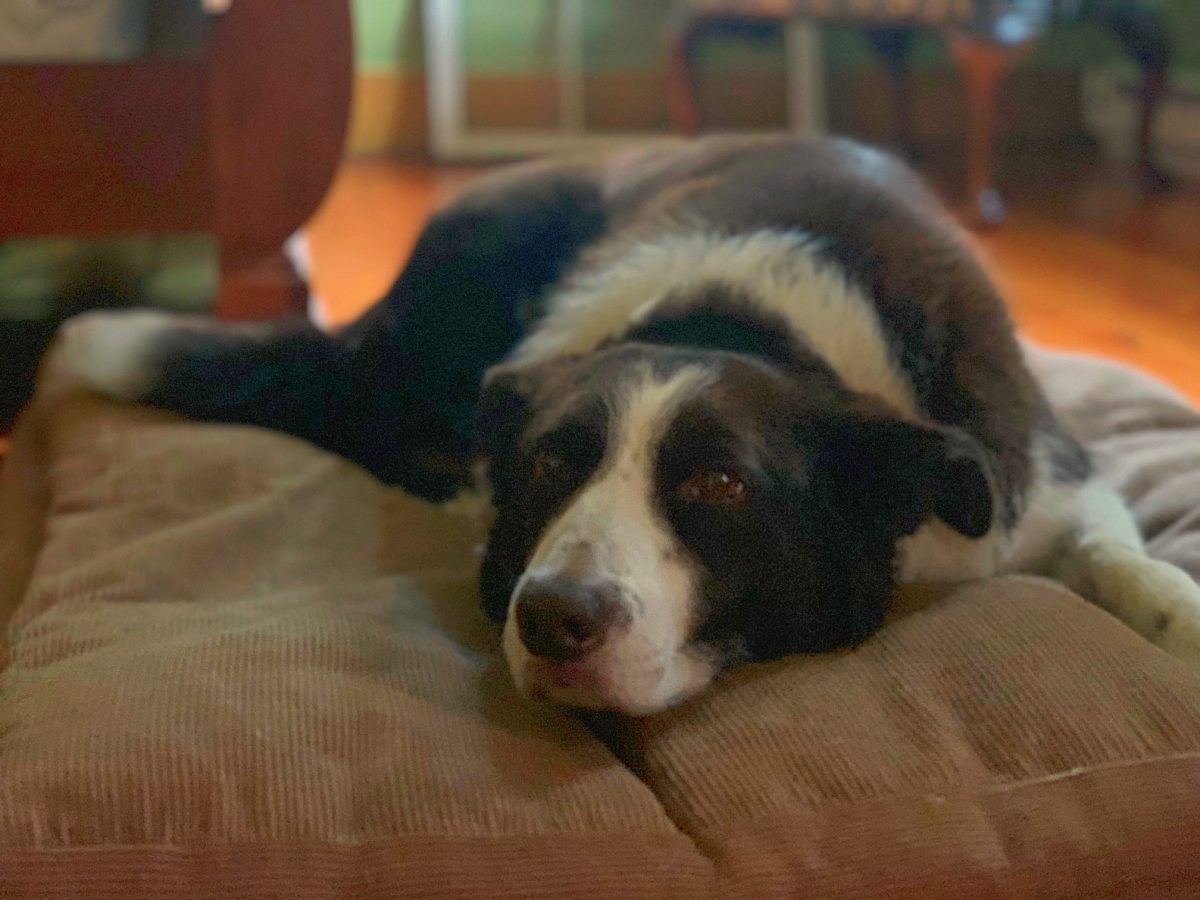 Two days after she arrived – she was nine weeks old – Zinnia came into my study and lay down behind me and went to sleep, quietly, as if she did it every day. I thought she was becoming my dog.

But I’m beginning to see the significance was more profound than that.

I wrote for several hours that morning, and Zinnia, a curious and active puppy, never moved.

If Maria hadn’t seen her, I wouldn’t even have known she was there.

Red’s death left a hole in my life, of course, but it was when I worked in my office that I felt the absence of this very intimate relationship the most. I missed working with him and the sheep, but his presence when I wrote was personal and grounding.

I always thought he was supporting my creativity.

I’ve always had a dog with me when I write.

I missed Red’s very steady presence alongside me as I worked and everywhere else I went in my life. I felt it, especially in my office.

Suddenly, and almost magically, it seemed as if that hole was being filled.

Zinnia lay down in the very spot that Red lay down in for the eight years that he was with me.

Red and I never spoke much; we didn’t need to.

Red, like some great dogs, knew what I wanted and was going to do well before I did. I don’t spend too much time mourning dogs, but I missed his presence when I worked.

“She’s your dog,” said Maria of Zinnia, and I said yes, I think that is true. I left it there. But it haunted me a bit; I couldn’t account for it so simply. It seemed there was more to know.

I was confused to see Zinnia filling that role. I didn’t ask her to come in my office, didn’t train her to do it, didn’t expect her to do it.

I am wary of the spiritual miracles people sometimes attribute to dogs; they are animals, after all, not spiritualists. I’m a skeptic at heart.

Animal communicators are real and valuable to me, but many have told me what I wanted to hear, rather than what I needed to hear. I don’t need to be forgiven by dogs for the decisions I make; I need to understand their spirits and magic.

Today, I met with a good friend who knows a great deal about dogs, their physical and spiritual life. I trust her and value her opinions. She is wholly grounded in dog biology, yet deeply spiritual.

I told her this story, and she smiled, hesitant, and then said she understood.

She is someone who has studied dogs for years and whose judgments and observations I have dome to trust. She is not an online friend; she’s someone I see and know well.

I asked her what she meant – I asked her to be honest, she was shy about this – and she said Red had communicated with Zinnia and asked her – or summoned her – to finish the work he started with me.

As an older spirit dog, Red perhaps had the power to call a puppy to a task.

That idea caught me by surprise; it just isn’t the way I think. Like many men, I favor more evident and literal explanations for things. But I also know there are many things in the world. I just don’t understand. That doesn’t mean they aren’t true.

Really, though,  once I thought about it, there was no other plausible explanation. This idea about Red seemed the truth to me.

I thought at first that perhaps Zinnia had picked up on Red’s smell, but that didn’t explain how she now lies by my side when I work every day, for as long as I work. Red’s smell is all over the place.

She is sitting by me even now as I write this.

My friend’s explanation made sense to me. I remember one of the only times I ever felt Red communicating to me in words I understood was when he looked up at me, and I  heard a voice saying, “you bear watching.”

I always had the feeling that Red thought I needed watching, and he was still watching me, going where I went, and keeping an eye on me. I do bear watching, I know it, Maria often says the same thing.

Red was a soulful dog. Without question, he led me to a better place, including my work at the Mansion and Bishop Maginn High School.

This morning, I went out to shovel snow with a sweater and no coat or scarf.  I was surprised when I felt so cold I started shaking. I am strong in some ways, weak in others; there are big holes in my life when it comes to taking care of myself: a few years ago, it almost cost me my life.

Get a coat on, said Maria this morning as the wind howled and the temperature plunged. It somehow hadn’t occurred to me.

Maria thinks no one ever taught me to take care of myself, and this is true.

I wasn’t great at teaching myself either, as she is.

My friend said the story convinced her that Red had not left my life yet, as I thought he had. He’s stayed behind to finish his work.

He led or instructed or guided Zinnia to pick up where he had to leave off.

When she is older and settled, my friend said, then Red will leave.

Maybe this is what dogs do, come where they are needed, gone when they are done or too sick to continue. Dogs’ spirits might live forever, but I see their bodies don’t.

I speak to Red sometimes over his grave, but there is no reason to think that’s where his spirit is, or the only place it could be. That’s where his body is; his soul could be anywhere. My study would be the place if he were still around here.

The more I think about this, the more I believe my friend is correct. Why else would a nine-week-old Lab puppy sit so quietly and faithfully in a way she had never been before, doing something she had never done before for someone she just barely knew?

Hey Red, I guess you are still here, showing Zinnia how to continue the work you started and carried out so faithfully. That feels right to me.  I have always believed that you were a spirit dog, sent to me when I needed you,  gone when you couldn’t do your work anymore.

But your work wasn’t over, I still bear watching. Poor dog, what an impossible task. Even you couldn’t quite finish a task like that.

As my friend said, “Jon, you are always a work in progress. Red knew you weren’t done, and that you bear watching. He’ll hang around until he knows that work will go on. Zinnia has taken it up.”