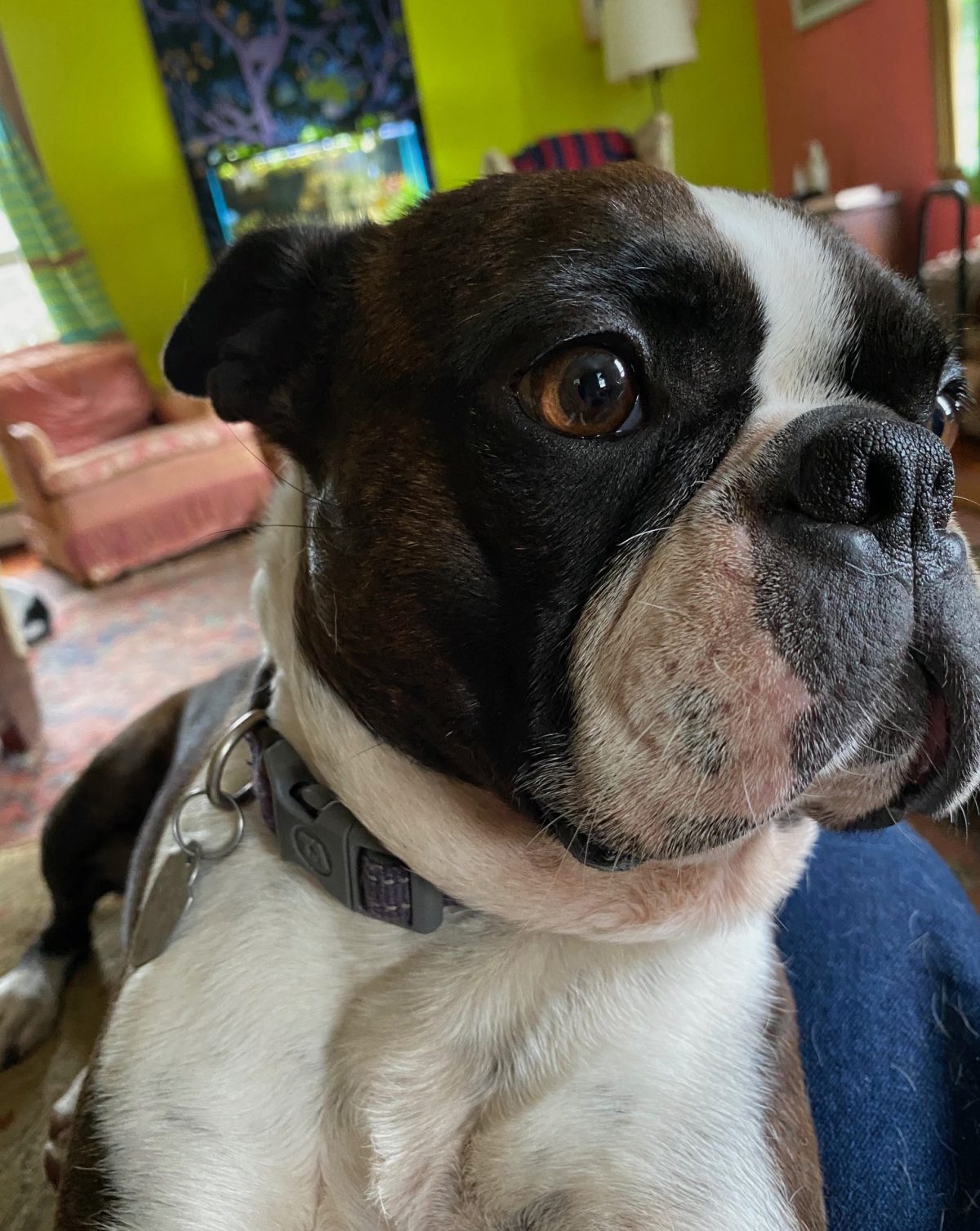 According to dog author and psychologist Stanley Coren, paleontologists believe that 14,000 years ago, a Stone Age man sat next to a fire staring at an animal that we would instantly recognize as a dog.

Dogs were not pets for the Stone Age inhabitants of the world; they were guards, protectors, companions for the lonely,  and hunting partners.

Coren imagined, as I often have, our forebears staring into the soulful eyes we know well and wondering, as I do every day, “What is he thinking about? How much does he know? Does he have feelings, and if so, what does he think about me?

Dog lovers are still asking those questions, and the hard truth is, to a great degree, we still don’t have any answers. We can only guess. When people tell me what their dogs are thinking, I just smile and nod.

The problem for us is a stubborn one.

There is no talking the people out of it, and the dogs have no idea what is happening. Nor is there any suggestion that they care.

Plato had a high opinion of the dog’s intelligence. He said the “noble dog” was a great “lover of learning.” He wrote that dogs were the “true philosophers.”

He wasn’t terribly impressed by the humans he found but he found that dogs were extremely moral and intelligent, often more so that the people he met. He even adopted the nickname “Cyon,” which means “Dog.”

Diogenes and his followers came to be known as “cynics” or Dog Thinkers.” Finally, a label I could live with.

Everywhere I go, people tell me they know for sure what their dogs are thinking. But researchers and biologists are pretty consistent about the truth. We have no idea.

Almost everyone who comes up to pet my dogs tells me their dogs will be jealous. But dogs don’t know envy or jealousy, those are human emotions.

When dogs fight for food, that is not jealousy, but a primal instinct for survival and nothing makes them happier than smelling a strange dog on their owner’s hands or clothes.

Far from being jealous, they are fascinated.

This is called projection, the projecting of our feelings onto animals, who have no way of correcting us or rolling their eyes.

Dog lovers don’t like to attribute instincts to dog behavior; it’s much more exciting to give them human words and thoughts and to speak for them.

How far can I go with the idea that dogs are moral beings, even superior to us in this way?

In my life with dogs, I can go pretty far. I’ve always seen dogs as noble; I love the way they can sit for hours and look out at the world and ponder what they see, as real philosophers do.

Morality is more complex, it involves making choices that reflect a sense of right and wrong. I’ve never seen a dog make a choice like that.

I also know when they think about it that dogs are not thinking in human words as philosophers do. They are thinking in dog language – sights, sounds, images, smells.

I admire them for not lying or suing each other, or fighting about politics on Twitter and Facebook. They are certainly superior to us in that way.

They dig holes but do not pollute the air or consume the earth’s resources.

They fight sometimes but never argue. They don’t sue other dogs or yell at them on cable television. More and more, people who love dogs want to believe they think like us, and often, in our own words and with our own feelings.

I don’t think dogs think at all as we do. In our terms, I’m don’t think they think at all. Dogs are about existing, adapting. They think with their marvelous instincts, which are at least ten times greater than ours.

They are intensely loyal to the people who love them, but also highly adaptable.  In a day or so they will be happy to be loyal to somebody else if they get fed and get to go outside.

Most dogs can be happily re-homed within a couple of days.  And yes, they will come to love someone else. Just ask the millions of rescue dogs who are re-homed each year.

Dogs switch homes for many reasons.

I have yet to learn of one who died of grief over the loss of their humans. When we die, they move along, and that is noble to me, they are role models for me in that way.

The truth is we love dogs so much we can’t wait to turn them into something other than dogs. My dogs are focused on eating, other dogs, running, walking, and playing in nature – they are great nature lovers, caretakers, and admirers of the natural world.

Dogs are inherently violent in some ways; they are all killing machines, descended from wolves. They do kill for sports, and out of instinct. That’s true of many animals. It is good to remember that dogs are animals and not furbabies.

Part of their genius and adaptability seems to come from tricking us into thinking they are so much more than they are when what they are is lovely enough. They seem to know that we need more from them than from other animals, and many people.

We don’t seem able to accept that. We always want them to think more, know more, feel more, perhaps because we are so disappointed in ourselves and our species.

My life for dogs comes not from elevating, but from accepting them. I love dogs because they are not like us, not because they are. I take them at face value and try not to project my own human shit onto them. Sometimes, I succeed.

I have no trouble believing dogs are nobler than we are and do so much less harm.

In the seventeenth century, the idea of dogs as philosophers took a hit.

The French philosopher Rene Descartes concluded that dogs had no minds to lose. Descartes and the Catholic Church held that dogs had no souls, and that granting them any degree of intelligence was admitting they had souls or consciousness like we do.

The Catholic Church said that was heresy. That is still official church dogma, but they dance around it these days, offering Bless The Animals days in most churches.

Dogs could not accept Christ, they said,  so they could not be seen as human beings. The idea that dogs might go to go heaven – a belief held by millions of dog lovers in America in 2020 – was unacceptable to the Roman Catholic Church at the time.

No Rainbow Bridge for the dogs of medieval times.

The view of dogs changed radically with the publication of Charles Darwin’s The Descent Of Man. He argued that the only difference between man and most of his mammalian cousins was one of degree, not kind.

He found that “the senses and intuitions, the various emotions, such as love, memory, attention, curiosity, imitation, reason, etc.,” of which humans boast, can be found in almost all of the lower animals.

A dog, he said, might be conscious and self-aware, but not to the same degree as a human being. Darwin did dogs no favors, I think, ever since then, people are happy to treat them as human children, members of the family. That is only occasionally good for dogs.

I have always liked Thomas Aquinas’s idea about the purpose of dogs in our lives. He said God made dogs to teach human beings how to be merciful and teach other humans well.

Just look at the news.

In our time, philosophers have been pushed to the sidelines, and they seem to have bigger things to worry about than what dogs are thinking.

We haven’t come all that far in unraveling the mysteries of the dog’s mind.

Mostly, I think dogs are simple at the core. They are about surviving and getting humans to take care of them, something raccoons and squirrels, and rats have not figured out how to do.

I’d say adaptability and manipulation – both instincts in dogs – were there most pronounced traits.

The border collie may know a thousand words, according to border collie lovers, but they only seem to need a few: “where are the sheep?” and “let’s go to work!”

Labs are not considered to be the smartest dogs, but they are brilliant when it comes to food.

If you want to cry and laugh, get biologist Fran’s De Waal’s book Mama’s Last Hug: Animal Emotions and What They Tell Us about Ourselves, the story of a 59-year-old chimpanzee’s final moments with one of her keepers, and one of the best books on animal emotions I have ever read.

De Waal, who has studied animal emotions all of his life, believes animals have feelings, but that we know very little about them.

The only animal emotions we know about are the ones we can see. The rest is speculation.

We have little knowledge of what goes on inside of them, or about their feelings, which we can’t see. I don’t know what my dogs are thinking if they are thinking in human terms at all.

I’m okay with that.

Most dogs have learned how to trick humans into thinking they know us and love us for who we are. It is tough to find a human being who will do that.

My idea about dogs is to let them be dogs, and not to think about them so much. They are not psychics, spiritualists, unconditional lovers, or wise philosophers.

There is something noble about dogs, for sure, but I remind myself that they have no conscience, no ability to change or alter their lives. They are completely independent on us, and to me, that is not unconditional love.

If I treat my wife poorly, she can leave me, sue me, or divorce me. Dogs have no options.

Mostly, their intelligence comes from learning to be smart about what they instinctively need to be smart about – manipulating us into thinking they are just like us, and getting us to love them, feed them, and offer them shelter from the winds.

No other animal apart from cats has done anything like that. That is their genius. They get human names, special food, and the chance to sleep in bed with us.

They are quite wonderful, but when all is said and done, they are still just dogs, and that is good enough for me.