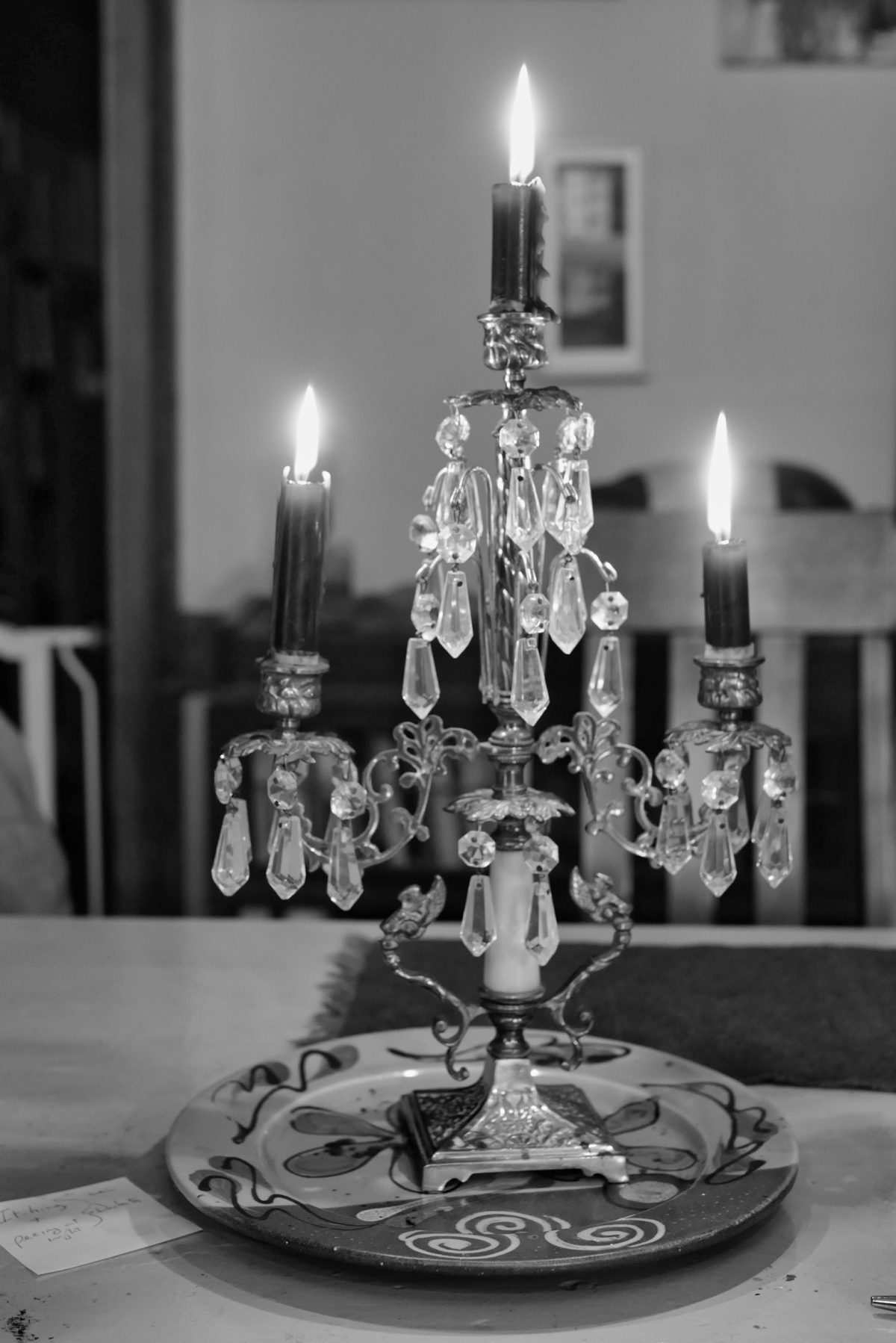 Tonight,  I came to believe that Minnie Cohen, my grandmother, was right here in my house last night. She came for Maria, not me, and the soup was her way of connecting.

I went to my copy of the Zohar, a significant work of the Kabbalah, the writings of the Jewish mystics. I wanted to understand what I felt was a visitation from my grandmother, and her embrace of my marriage and life.

It was such a strange and shocking idea for me, I literally shook.

The Kabbalah says that the souls of departed parents and grandparents come to us to share the joy and travail of their loved ones.

Some mystics say that grandmothers have the power to reach out to people we love and support them, and send them messages.

The soul never dies, says the Zohar, and a soul connection like the one I had with my grandmother is eternal.

Oddly, we were connected most often by her borsch soup, which she served whenever I was sick or unhappy, which was frequently.

She barely spoke English, but she was always trying to say she loved me, and comfort me,  and her food was one way she knew how to communicate with me.

Every Saturday of my young life, she took my hand, and we walked into downtown Providence to see a movie – she adored Jerry Lewis even though she hardly spoke a word of English. She was a Russian refugee who escaped the Czar’s rampaging army and saved her life.

Every time she saw a policeman, she would throw herself in front of me, prepared to fight if they came for me. She would never believe they wouldn’t come for me.

I believe my grandmother loved me more than any other person in my life until I met Maria. I think that their love for me and my love for them has bonded us to one another.

The soup was the only way she could communicate. Maria also loves beets and they found a way of finding each other.

The Jewish Bible tells the story of Ephraim and Menashe, the first sons of the Diaspora that drove the Jews from Jerusalem.  They were saved and sustained by their grandparents.

Scholars say this is the first time that the love between Jewish grandparents and grandchildren was acknowledged and sanctified in the Bible.

The Kabbalah says there is no relationship more pure and uncomplicated than the bond between grandparents and grandchildren.

When a grandmother blesses a grandchild, they do so, says the Kabbalah, “with a full heart.”

Grandparents, said the mystics, bless their grandchildren and are blessed by them. This is how I felt about my grandmother, who loved me through so many troubles. She loved me with a whole heart.

I feel this same love between Maria and me. We love each other with whole hearts.

I’m not religious and have long turned away from the rituals and complex laws of Judaism. And I’ve never been visited by a spirit that I know of.

But these readings have helped me to understand the special relationship I had with my grandmother. And the feelings I had yesterday and today.

This was an emotional time for us, with so much happening in our lives. It was a time for a soulmate to come and touch our shoulders. We were raw and tired from the past few weeks, something my grandmother would have noticed.

This week has opened me up in several ways. The soup was one of them.

My grandmother and I disagreed on only one thing: she urged me not to marry a Christian woman, who she insisted would not know how to clean a house or cook a meal. I told her that was small-minded, but she never wavered.

She never met Maria, but I have always believed these two lovely and loving women would have loved and respected each other.

I have never doubted that my grandmother, who cared so deeply for me, would be anything but grateful to Maria, who cares so profoundly for me and for whom I care for so deeply.

Yesterday, I had the feeling that Maria struggled to figure out how to make the borsch soup my grandmother made, that my grandmother and her spirit were in the room.

When I was with my grandmother – she was Minnie Cohen –  she always had candles lit on the table, she always prayed over them. When we landed our candle holder, it brought those memories back to me.

I  believe she came to put a hand over Maria’s heart and tell her she was grateful to her for loving me and accepted her as the best possible wife and partner for me.

She had come to bless her and, through her, me.

All she ever asked of me was that I would be happy, and I had the sense that she wanted to speak to us,  using this soup as a connection between me and her, and now, her and Maria.

I know this is strange, and I am surprised to be saying it out loud; I am not into visitations from the dead or ghosts.

But I don’t hide my spiritual life from the people who read my blog, we have been taking this trip together for some time now, and I promised to be open and honest, and I keep that promise.

I lit the candles tonight for dinner, and as I did, I suddenly remembered the Shema, the prayer my grandparents said or sang twice a day. I am not a devout Jew; I never was, I will never be.

But I do know there are things I don’t understand that are true nonetheless. I am always affected by the Kabbalah.

I hadn’t thought of the Shema or repeated it for half a century, but it suddenly came pouring out of me. The only time I ever spoke was when I was with my grandmother.

The Shema was spoken daily in my grandmother’s house and before meals. It began Hear O Israel, the Lord our God, the LORD is one. You shall love the LORD with all your soul and with all your might..”

It is one of the holiest prayers in Judaism, so sacred that my grandparents covered their faces when they said it, and so did I.

Suddenly, as we finished the soup, Maria made much as my grandmother made it; I started reciting the Shema and then started crying. It was as if some spirit possessed me; it just came up and out of me.

I was shocked at the words coming out of my mouth and how clearly I remembered them. I couldn’t stop crying.

Why am I crying? I asked myself and Maria. Because, she said, it was a part of your life with your grandmother.

I thought this was true. But then I realized the only reason I could be crying and even remember the Shema was because my grandmother was in our home, blessing us and our life together.

She was with me, right here in the kitchen, where she spent so much of her hard life. She brought me back to that place of love that was so important to me.

That was what the soup was about. These two remarkable women, the most important women in my life, one at one end of my life, the other at the other,  had finally found a way to talk to each other.