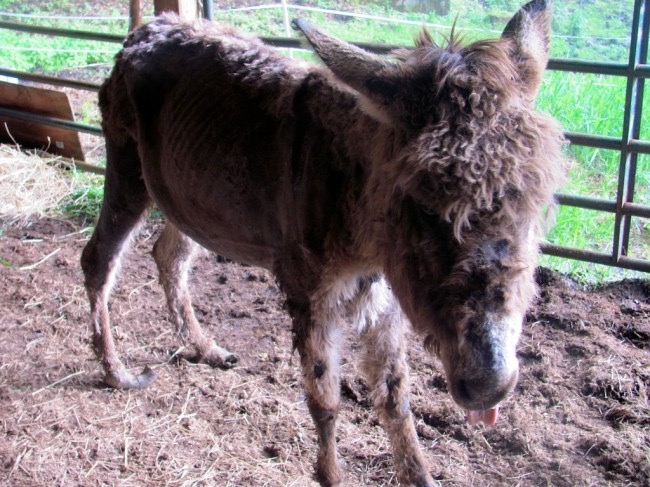 I don’t like to post this photo often; I’ve only done it once or twice. It’s just too disturbing.

I’m not in the business of upsetting people (at least not consciously.

I wrote about Simon yesterday, and this morning, I was flooded by messages from people who had read my book Saving Simon and followed his recovery on the blog but did not know how he looked when he first came to us.

The outpouring of messages about Simon has re-awakened some of my strong feelings about him and also my great love for him.

As I’ve written a hundred times, I don’t I like to look back, and I would prefer to love animals and be grateful for them than mourn them – a farm teaches that.

I’m responsible for all the feelings about Simon out there since I’m the one who wrote about him and took pictures of him. It’s only fair that I respect these requests.

Simon was a shock to anyone who first saw him. A vet and state trooper cried as they got out of the tiny pen where he had been imprisoned without food for months and into the wagon that eventually took him to Bedlam Farm. A trooper told me they didn’t know of anyone crazy enough to take Simon on besides me.

You can see in the photo how his hooves were curled upwards; they had not been trimmed in years. Walking would have been incredibly painful.

You can’t see the infections of the eyes and mouth and teeth, the ribs,  the worms, the sores, the weakness in his legs. He was as close to death as an animal could get without actually dying. It took about six months before he started braying for me when I got up in the morning and another month or so before I took him for his first walk in the woods.

Maria and I took on the task of healing him together; she would have made an excellent nurse.

Simon opened me up in all kinds of ways; we just fell in love with each other for reasons I will not ever completely understand. I did not grow up on a farm or around donkeys, so I can’t imagine what we had in common,  except perhaps for the experience of abuse.

We each saw something in the other that we trusted and recognized, a sense of empathy and common ground. From the beginning, Simon trusted me to feed him, rub lotions onto his sores and founds, rub his infected gums with antibiotics, pour drops into his pus-covered eyes, and open sores in his ears.

With these two photos, I will leave Simon behind again for a while.

I’m sorry if this image hurts people; it is sometimes unconscionable when we see what humans do to animals. The animal rights movement is obsessed with killing off the New York Carriage Horses (and the ponies and elephants who worked with humans). These animals are, in many ways, the luckiest and best-treated animals in the world. And yes, they do work and have for centuries.

The people who claim to be fighting for animals don’t seem to scream or do much about the Simons, chickens, pigs, or rabbits trapped in inhuman confinement and abused, hunted, confined, poached, or slaughtered cruelly.

Simon taught me many truths about animals, one of which is that they desperately need an animal rights movement, not a billion-dollar bait and switch that separates animals from people,  drives them to extinction and punishes the poor and the elderly who would love the companionship. 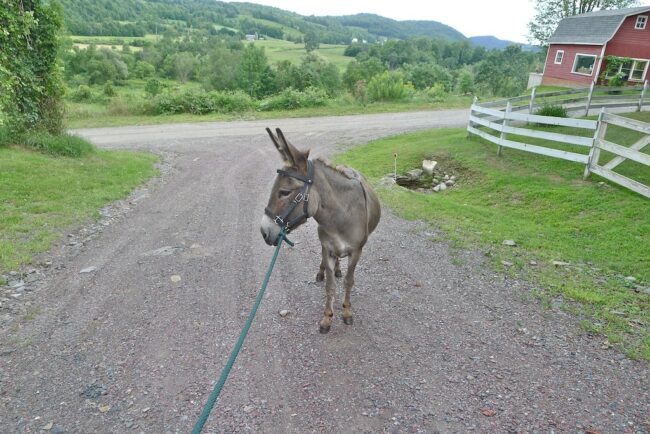 Maria took this photo. It was the first time Simon was steady enough to walk with me down a path and into the woods.

The photo above shows what Simon looked like the morning he was rescued from that farm.

I learned later when I met the farmer that his son saved Simon’s life by sneaking out when his father wasn’t looking and slipping some hay into his pen. The farmer seemed a good person to me; he was just worn out and broke.

That happens to farmers. He was one of those men who could not ask for help.

I can hardly imagine how many Simons or equines there are languishing and starving out of sight while the animal rights movement collects millions and millions of dollars to kill off the few big horses fed, sheltered, and brushed daily in America.  The horses and the elephants are just about gone from our lives.

I must fight to stay grounded in a world that would do this to a sweet and innocent donkey.