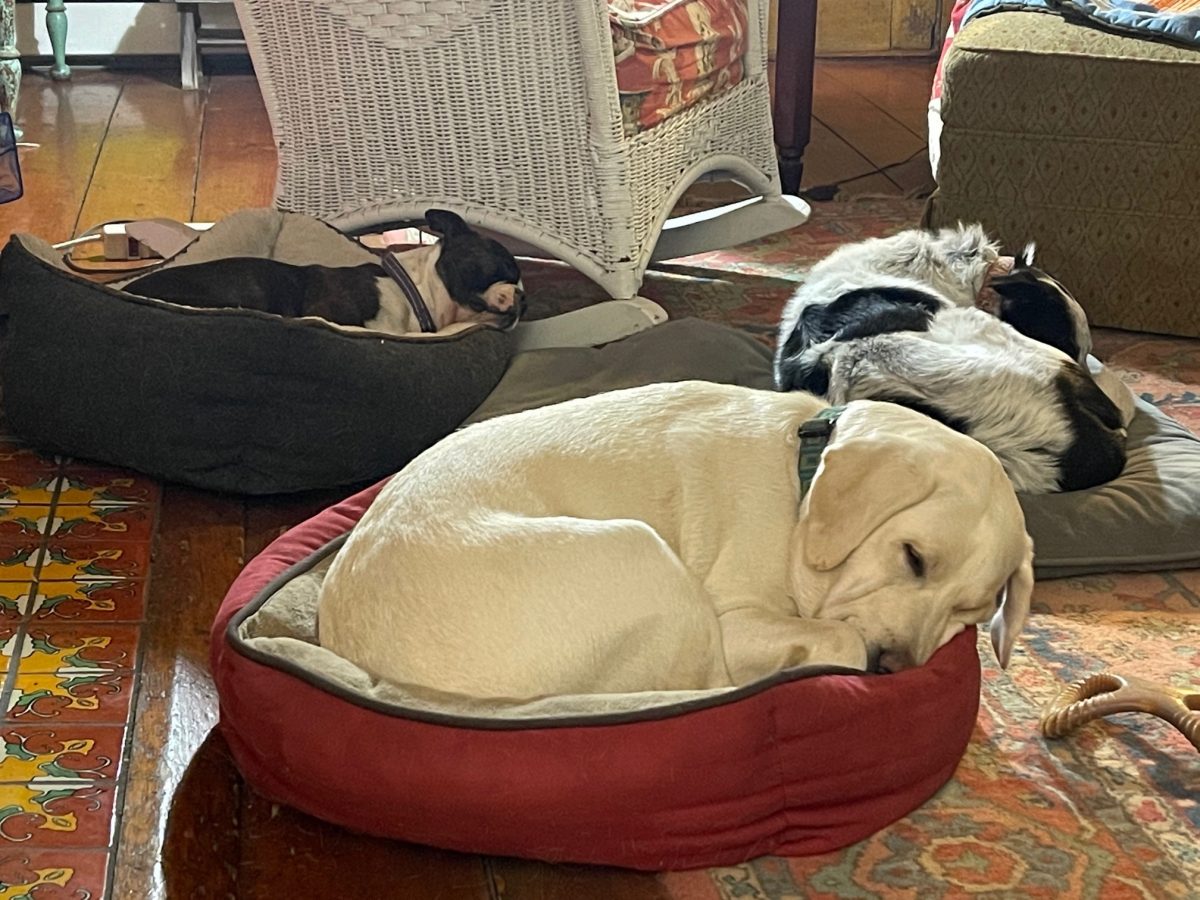 Unlike Bud, who knew pain and suffering every day for the first two years of life, Zinnia has been a dog of great privilege.

She is all sweetness and trust. She has never harmed a thing in our home,  frightened a human being, showed distrust, aggression, or disobedience.

She sleeps in our bedroom, curled up at the bottom, greets me first thing in the morning with gentle kisses and kindness.

She rides in our cars, eats the best food, walks in the woods, gets the best treats, chases balls with me outside, visits the sheep, and the donkeys adore Bud, and the standoffish Fate loves to visit Maria in her studio.

And whenever I write, she lies by my feet quietly and patiently until I am done.

I am a lucky dog and fortunate to have the dog I wanted and the dog I needed in Zinnia. She follows me everywhere.

It upsets me to be the one to introduce her pain tomorrow for the first time in her life. In the morning, we’re dropping her off at the vet to be spayed.

I have a doctor’s appointment outside of Albany Monday afternoon. Maria driving me, and we can’t get home in time to get her the same day.

We’ll bring her home on Tuesday morning. She’s supposed to be still and confined for up to two weeks (sure), and Monday evening, she’ll wait up lonely and bewildered.

Zinnia is not a complex dog; of course, she will be fine and soon forget those stitches (yes, there will be a hood for a few days). Dogs are not people, and after the first few days of discomfort, she’ll be herself.

I wish she never had to feel pain, but then, dogs and people do not live in paradise, but in the real world. I have my medicine; she has hers.

More than anything, she will miss chasing her  ball outside in the morning.

I’ll miss her, though, and be very eager to see her. 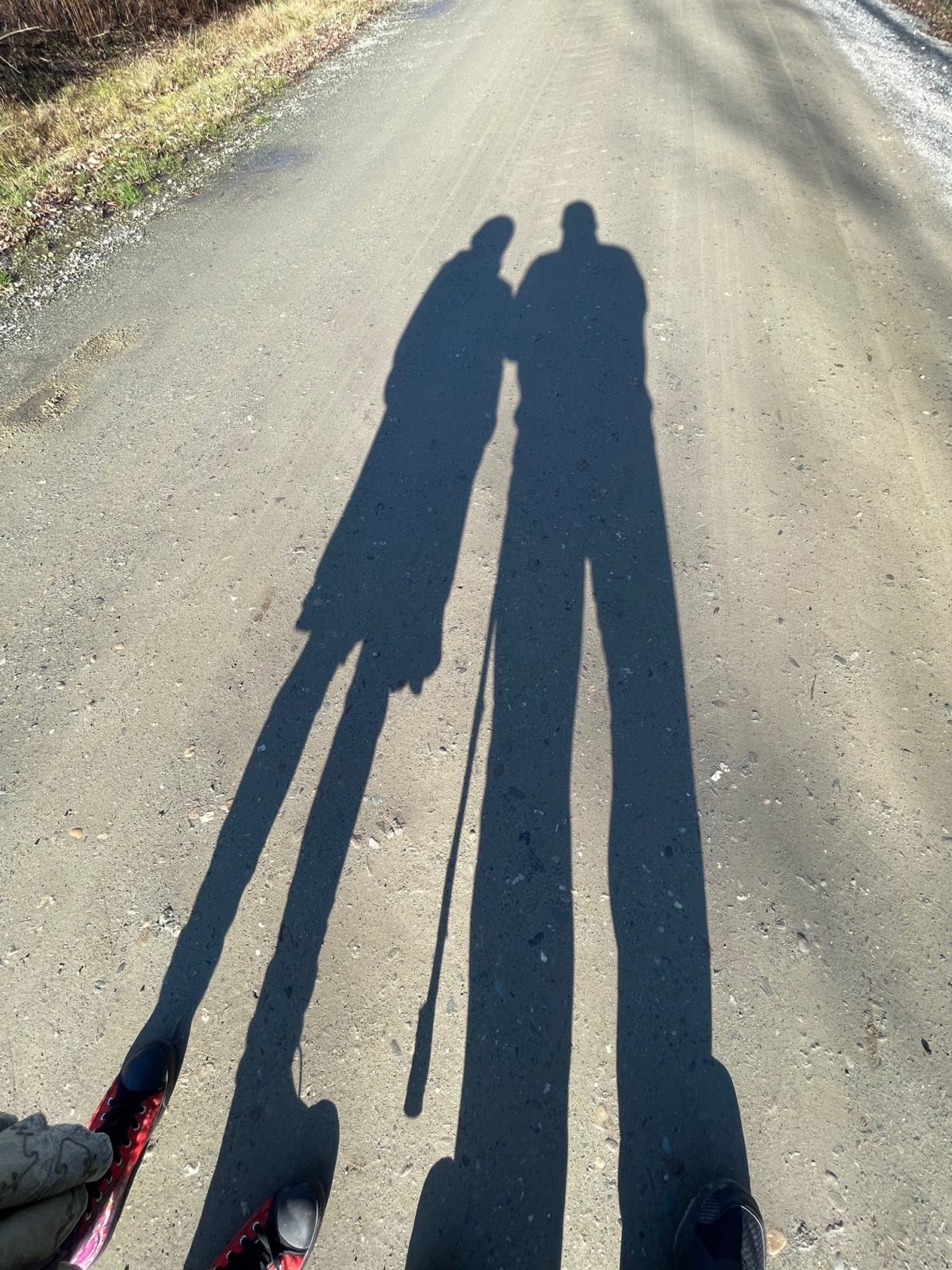 After all this time,

for anything in exchange for light,

never says “look what I’ve done for you.”

This is what happens to a love like this,

it lights up the sky. 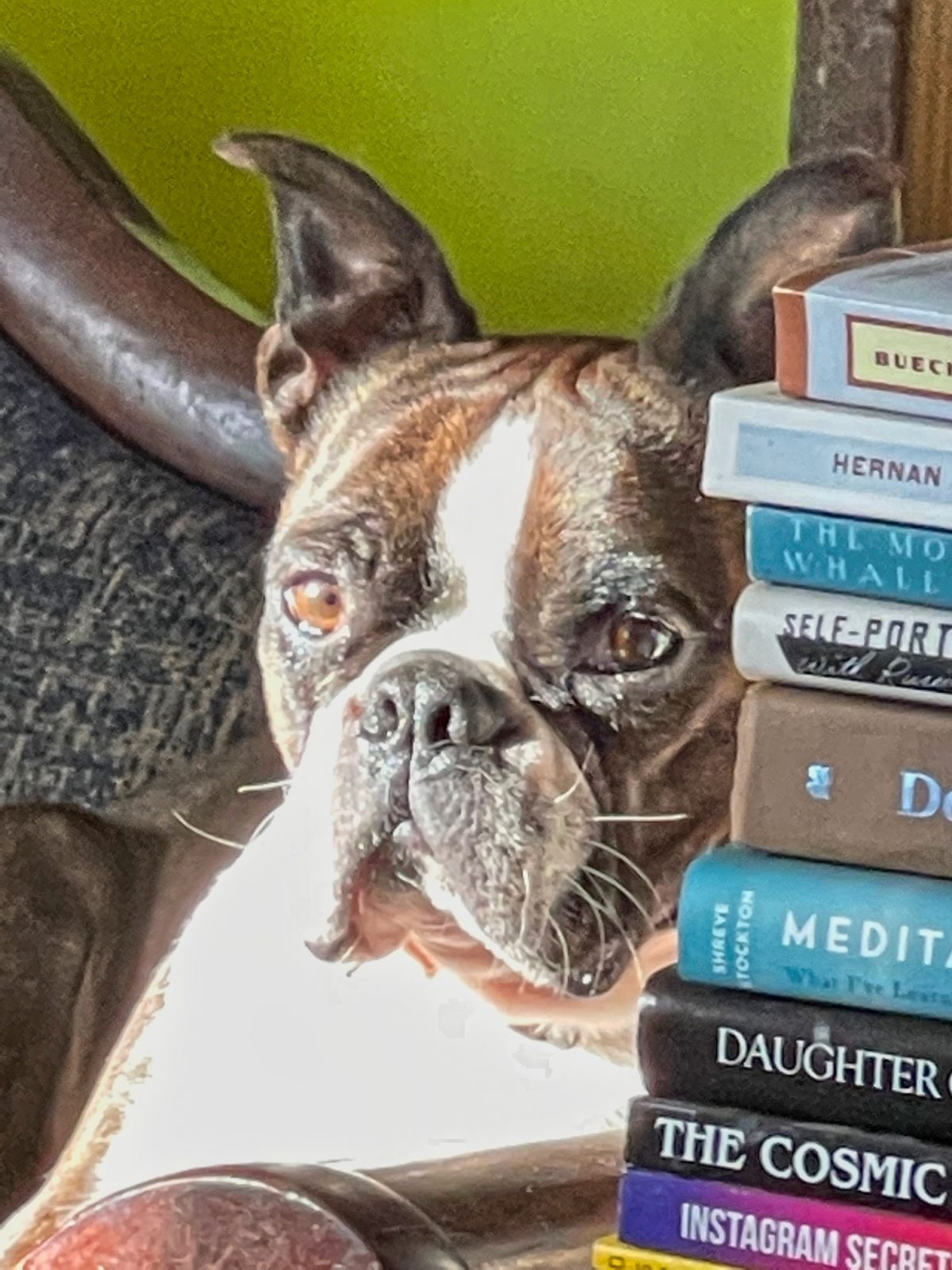 Bud loves our book pile, perhaps because the afternoon sun lights up the pillow and the couch that doubles as his throne. Wherever the sun is, Bud follows.

And when the sun isn’t shining through, the wood stove will do.

We call him the Little King. 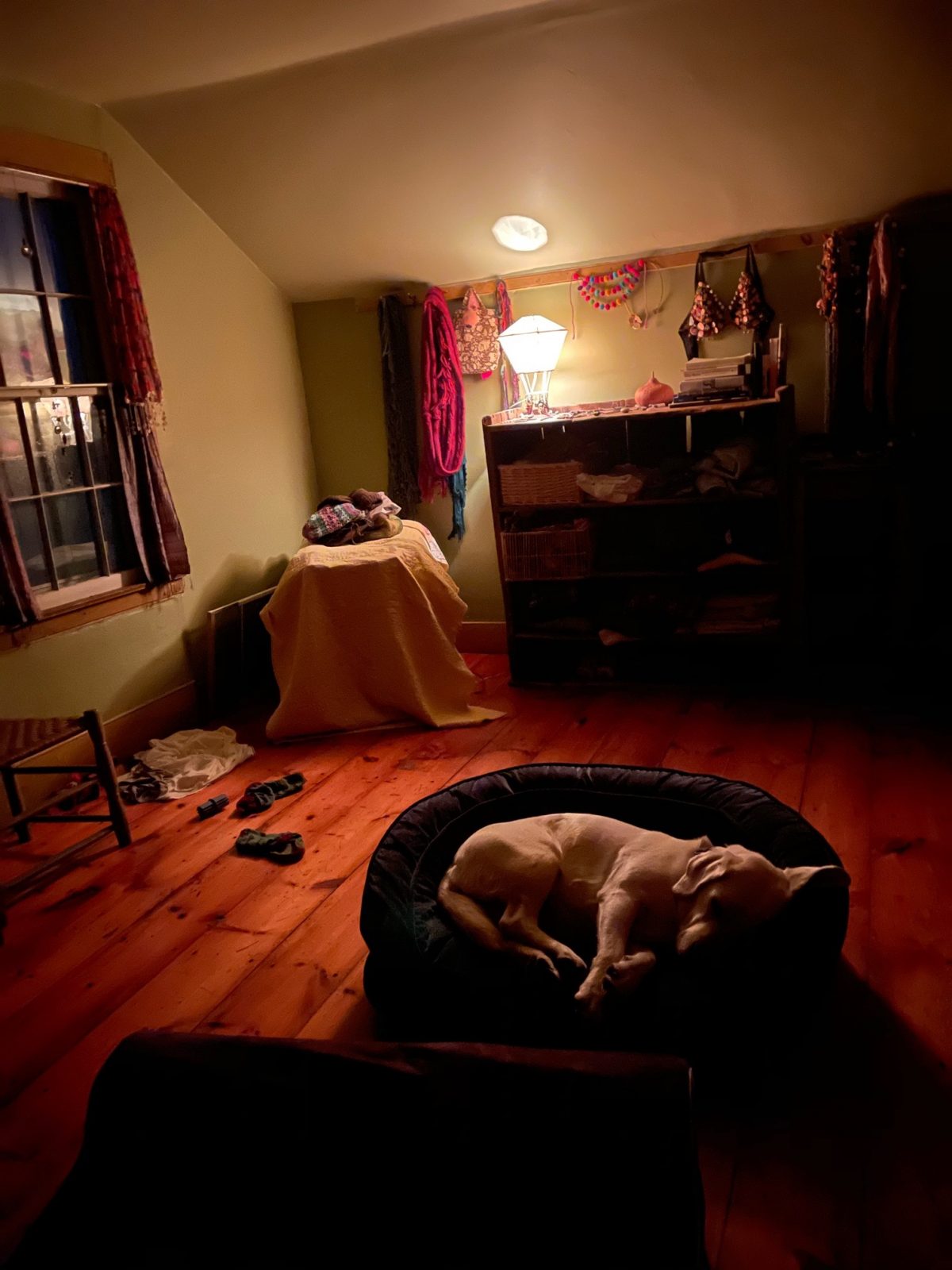 I traded in my Iphone ll for an Iphone 12 Pro Max this week, and I did it not because I needed a new phone – I didn’t – but because the upgraded camera in this phone is getting raves from professional photographers.

One of the upgraded photo features is a powerful zoom, another is the ability to show in the dark with clarity and depth. The camera is a huge leap forward.

I took this shot in our bedroom at 3 am. Zinnia is lying on the floor on her plush blue bed, and Bud is all cozy and holed up in his crate in the far corner of the room. He loves that crate and snores peacefully all night.

I turned off the flash and let natural light work, and it did work. Our night lamp lit up the corner, and the laundry on the floor added a homey and familiar touch.

The phone’s color is rich and distinct. This upgrade was a good idea for me. I appreciate learning some of the lessons of the future, especially AI, which is a deepening feature of the new iPhones.

Apple is giving me $500 for the phone trade-in, and I paid for much of the remaining balance in cash. I owe a few hundred dollars.

I am grateful for the chance to grow and learn.

I lost touch with reality; I was so preoccupied with defiance.

Surrender, I was taught, is defeat; defiance is strength.

Surrender has always been associated with yielding to the power, control, or possession of another person upon compulsion or demand.

It means being a prisoner, retreating, or being defeated.

This is especially timely for me and our country right now.

Our President proclaims proudly every day that he will never surrender to the November election results as if losing it is humiliation, not a reality.

I see in this the tragedy of Manthink, the ideology that is despoiling the earth and our politics. It feels sad to me.

I can’t see the heroism in fighting hopeless battles grounded in fantasy.

I see our President equating the acceptance of reality,  as I did for years, as a form of surrender, a humiliation, something he can never accede to, and keep his manly pride.

It comes down to how you see yourself really, as General Custer going down in glory or as the wise man learning lessons of wisdom and taking a turn for the better.

Only the child can’t surrender; the flow of life will wash right over the rest of us.

At some point, this defiance is the fantasy of every boy on the earth.  What is more heroic than standing up to overwhelming power, even at a great cost, even to death?

In later years, things are usually not so clear cut. Life is like waves pounding on the beach; they wear the hardest rocks down to pebbles. Victory and defeat take on grayer, softer meanings. Some men learn that; some never do.

I remember trying to teach my very young daughter that life has a lot of ups and downs, but she couldn’t grasp the concept then, and I realized this was a lesson she would have to learn for herself.

And she has. Our President never learned this lesson.

We really can’t win them all; the real victors accept their losses and their gains. They each really are the same thing,  the flow of life.

I have often felt that way about surrender, that it was a defeat. I’ve changed.

President Trump helps me to realize that I think very differently now about the idea of surrender than I once did and that he does and of how he does.

There can be something liberating about surrender, something freeing. The ability to surrender gracefully is grace itself.

Surrender, says philosopher Eckhart Tolle, is the simple but profound wisdom of yielding to rather than fighting or opposing the flow of life.

The only place where you can truly experience the flow of life is “the Now,” says Tolle. To surrender is to accept the present moment unconditionally and without reservation.

It is not a defeat, but as letting go of the inner resistance to the truth, to what is real and to what is.

I wonder if President Trump realizes how much easier it would be for him and us and for everyone who loves him if he could see that his fierce resistance to what is, through mental judgment and emotional negativity, becomes hard and pronounced when things go wrong.

Or when life does not flow in the way we are taught to believe it should.

Tolle calls this “the pain gap,”  the space between the demands of rigid expectations of our mind and what is.

When I was younger, I really didn’t know that things go wrong quite often in life, at least as often as not.

I am no longer stunned or angry or defiant when the flow doesn’t go the way I wanted it to.

I hoped that our enraged and aggrieved President would be defeated, but I was also prepared to surrender to it. If he weren’t, life would go on. I understand that I either accept the now or face being overwhelmed by it.

It is precisely at those moments that surrender to the now is essential if I or anyone else wants to reduce or even eliminate the pain and sorrow that comes with all of our lives.

Acceptance of what is frees me from disappointment, even rage and fear, and reconnects me with being human now.

I practiced this during the efforts to overturn the presidential election. There were victories and defeats, ups and downs every day. The earth seemed to hang in the balance.

I knew I had to practice surrendering to keep myself grounded and useful, and at peace with myself.

I nodded to the moment, good and bad, and saw that I am learning to see things in terms of the larger picture, that flow of life, not the hour-by-hour roller coaster of living in America.

I stayed steady and at peace.

Sometimes, I fantasize about a chat with the President, a friendly chat. Listen, I wanted to say to him this week, you’ve done well, you’ve had great victories, great wealth.  You have made your mark on the world.

Why not surrender to the moment?

Surrender to the truth of what you see, and then you will be free to go on with your life in any way you wish.  Your life can continue. You can put all this rage and poison aside.

And I surrender to the certain knowledge that this can’t happen and won’t happen. That’s how people make defeat so much worse by never accepting it.

Surrender doesn’t mean being passive or submissive; it isn’t about loss and defeat.

Surrender doesn’t mean giving up on plans or taking strong and positive action. There is no judgment of the now, just acceptance.

Therefore, there is no resistance, no anger or disappointment, no vengeance or grievance.

I can be bigger than the defeat or disappointment of the moment. Then I can take action – positive action – and do what I need to do to get to a better place.

I needed to learn how to do this from 2016 to 2020, and it worked for me. To me, this is the choice between positive action and negative action.

The flow of life doesn’t rule my emotions; I do, I accept it, I don’t wrestle with it. I can’t live in resistance to the truth; I can’t always have it my own way; I am learning to accept life as it is, not as I think it should be.

I didn’t deny the existence of Donald Trump. I surrendered to him and let him show me how to be better. But what is really teaching his supporters? How to make life better, or how to make it much worse?

Positive action, I’ve learned these past few years, is much more effective than negative action, which arises from anger, despair, and frustration. The bad works for me as well as the good; both are gifts that each and reveal.

There is no need to label either one. Both are life.

I think of the President and how he suffers inside, I think Tolle imagined him when he wrote, “non-surrender hardens your psychological form, the shell of the ego, and so creates a strong sense of separateness.  The world around you and people, in particular, come sot be perceived as threatening.  The unconscious compulsion to destroy others through judgment arises, as does the need to compete and dominate.”

Even nature becomes your enemy, wrote Tolle, and your perceptions and interpretations are governed by fear.

The mental illness that we call paranoia, he says,  is only a slightly more acute form of this dysfunction and unhinged state of consciousness.

Men, in particular, are taught that surrender is always a defeat or retreat.

The flow of life teaches otherwise. Surrender can be the biggest and most rewarding victory of all.