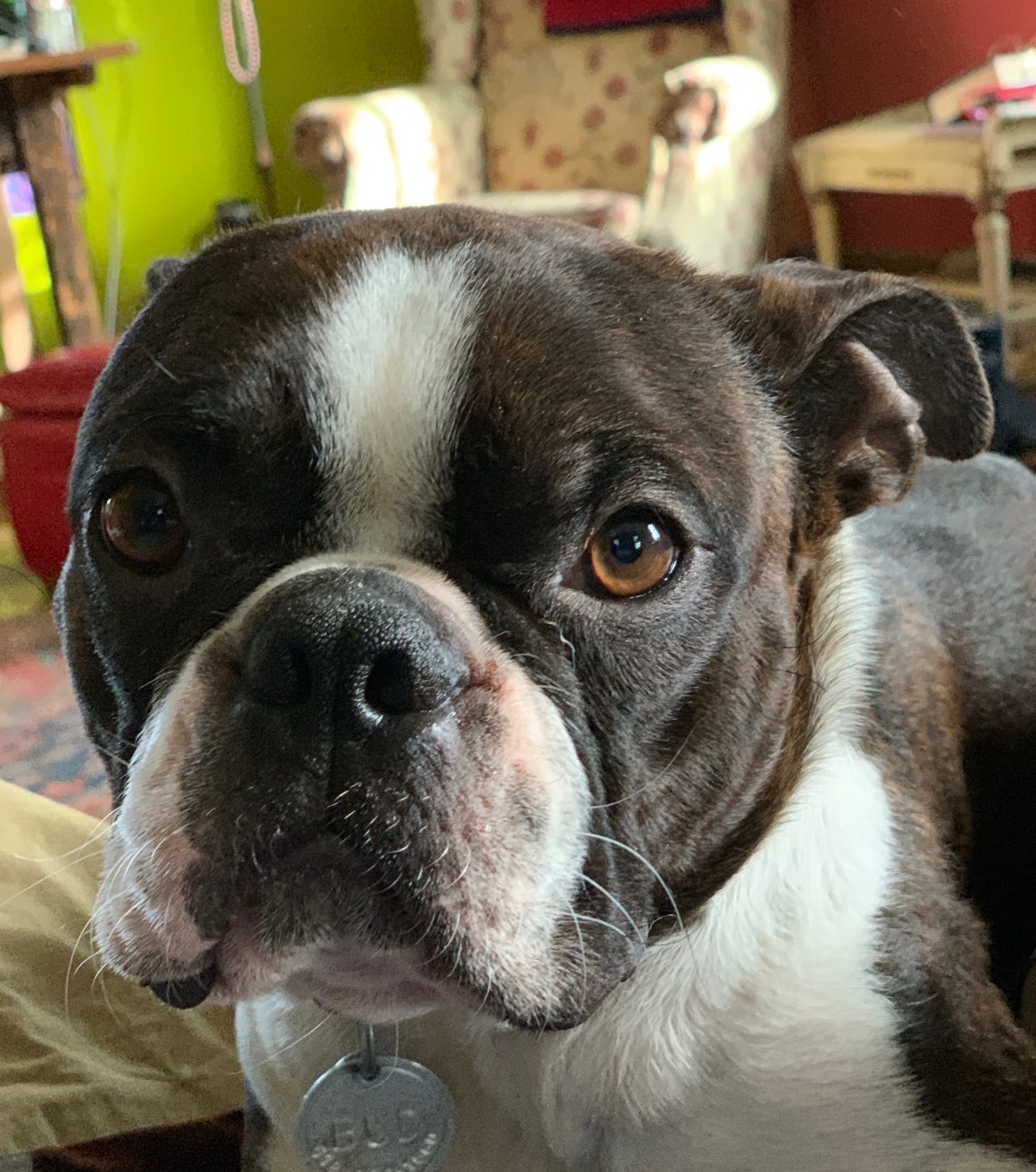 I think I can finally say with some authority – it’s been more than four months – that our new Boston Terrier Bud, is housebroken. That is, it’s been three weeks since he’s gone to the bathroom in our house.

The training of Bud has been a rich experience for me, a journey of love, patience, frustration, anxiety, and ultimately, the spirituality of commitment Dogs can do that for you if you let them. Oh yes, and crates.

But was not raised in a home, but in a steel pen where he was abandoned early in life, the dogs with him died of exposure, he survived thanks only to the big hearts of a rescue group called Friends Of Homeless Animals, whose members pride themselves on taking on the dogs that no one else wants or can stomach.

When they learned his pen companions had died  of exposure, starvation and  heatstroke, they rushed to buy him from his cruel owner.

Bud was a mess, he had heartworm, among other things and it took $1,000 of veterinary care (discounted) to bring him to health and to the point where he could be adopted. He had none of  the usual behavioral experiences that shape a dog – litter, training, socialization, loving care.

Bud had lived in his pen for most of his 18 months, exposed to the elements of Arkansas every day of his life. He was closer to a wild animal when he came then a domestic dog. He devoured the feces of other dogs and animals as if his life depended on it, which it apparently did.

In his months in foster care, there was no time or way to housebreak. He went when he had to go. He hated to go outside in rain or cold.

On top of the fact that he had never been housebroken, Bud had also never been exposed to extreme cold and winter – snow, ice, bitter winds.

He was, at first, terrified to be outside in the cold, and wanted no part of the snow. Upstate New York is a tough environment for a dog like that.

Our farmhouse sits on an open plateau, the wind barrels in from the North, and Red trembled when he heart the windows shake, as they often did. We get most of the winter howlers that come pouring out of Canada.

Bud had no idea about eliminating outside, he mostly went inside. We almost never saw him go in the  house, he seemed to know we wouldn’t like it.

He would dart into the bathroom, under the dining room table, in a corner of my study. When he did go outside, he would frantically feast on the feces of the other dog’s. He was savvy and quick.

Bud also marked furniture, chairs and dog bowls in the house, he lifted his leg over everything we owned to mark his territory and announce his presence. Lord knows what he was thinking. He was terrified of his crate, he took two of them apart in a panic after he first came. I started feeding him in the crate and tossing treats and toys in whenever I walked by.

For days, I followed him around the house with a Pet Corrector spray, making hissing sounds when he began to lift his leg. That worked.

Bud was cautious at first about going into his crate, but I never closed the gate so he gained confidence and trust in going in and out, there was always something good in there for him to eat. And he took – takes – eating seriously. Eventually I filled hollowed out marrow bones with peanut butter and tossed them in the crate, and when he rushed in, I closed the gate.

He loves his crate now, goes in easily, stays there quietly. Until recently, he slept in the crate. He’s made it to the bed now.

That is the foundation of housebreaking: to give the dog no chance to fail. Since dogs hate eliminating near where they sleep, this was the beginning of his training. But I had to be patient, and few people are patient when dogs are dumping in their house.

The farmers have a simple and time-honored housebreaking technique. They separate the puppy from the house for a couple of days, usually out in the barn. The puppy never learns to go anywhere but outside, and after a day or two, they are housebroken and can come inside.

Usually I housebreak and dog in a day or two, this one went on a long time. I had to keep evoking my recent motto: despair but persevere.

For all his troubles, Bud has a big heart and is anxious to please. He watches and listens and hates to disappoint.

Bud is a genial dog, sweet in nature, and forgiving, thankfully. He bore no grudges or ill will, and the fear he showed around me melted away in time. His troubles going outside did not. He never seemed to blame me for pestering him, he would tilt his head and stare at me in wonder at what I was trying to tell him.

I waited a month or two to really take this housebreaking thing on, he had quite enough to deal with. I let him outside often. I made a note of the times he eliminated and the size and scope of the feces. I tried changing foods a few times to see  how he reacted to food, how often he went, how badly he needed go.

I realized that after breakfast – he gets a cup twice a day – Bud would eliminate twice, once right a way, and a second time, about 45 minutes later. In between, I tossed a treat into the crate – he loves his crate – and I kept him there for 45 minutes.

I soon had a reliable and proven elimination chart, data I could work with.

After 45 minutes in the crate, Maria or I I walked him right out the back door, even in the cold, even in the snow. I watched him out the window, sniffing, looking for a dry, safe spot. But then he had to go, as I knew he would, and so he went. He was laying down a smell he would remember. That’s how they decide where to go.

There has never been a dog in the world, I think, who didn’t take a dump after eating.

Now, Bud goes to the door when he wants to eliminate, he comes up to my knee and puts his head on it (or Maria’s knee). When he is done, he runs up to the back door and sits on the stoop.

He is rarely in his crate these days, and he seems to enjoy going out in the cold, even the snow. He doesn’t stay out there long and we keep a close on him, but he’s been out there dumping and peeing in -15 degrees, and in high wind, and after big snowstorms.

We dig out the snow for him to have space, but he does the rest.

I can say now, after several weeks,  that he is housebroken. Aside from the obvious, it has become part of his nature. For dogs, what is repetitious becomes reality. He just goes outside.

There may – almost certainly will – be accidents in the future. I don’t have a perfect dog, I don’t want one. When he eliminates, we shouted praise for him, tossed him a biscuit, sang out in those awful high voices dog people use.

But it was pretty basic. When he had no chance to do the wrong thing, he only did the right thing, and he loves praise and reward.  My method is not in any book, and it is not the way Cesar or the New Skete Monks do it or recommend it.

Every dog is different, every person is different.  I sure don’t see myself in any of those books or on those TV shows, I relish figuring it out myself. It is not, as they say, brain surgery.

It seemed to me at the time that this was a very difficult thing to do, but in truth, it was pretty easy.

You just have to be your own guru and believe that what you want to happen can happen. Then you have to make it happen. When there is trouble, it is almost always us, not them. Gus was doing nothing wrong, he was just living out his own experience, his own reality.

We are, in fact, smarter than them, although people hate to say that, we want to see them as seers and prodigies. We tent to care more about this stuff than they do, they are just trying to get by in a hostile world.

Unlike us, they are anxious to please. You just have to make it clear what you want.

It is true that in order to have a good dog, I must learn to be a better human. That calls for patience and thoughtfulness and some love.

I never claim to know what a dog thinks, but I think Bud’s great big heart come him through life in that horrific pen. Like me, he wants to do right, and we try to do right together.

Over these four months, But’s true self began to emerge, and he began to learn the things he never got to know. I am happy to say that Bud is housebroken now, and we don’t really have much more new training to do.

All we have to do is polish up on the old staff and keep on working together.

Only dog people talk about poop a lot, we all come to know it well. I am glad to report that Bud is dumping outside.