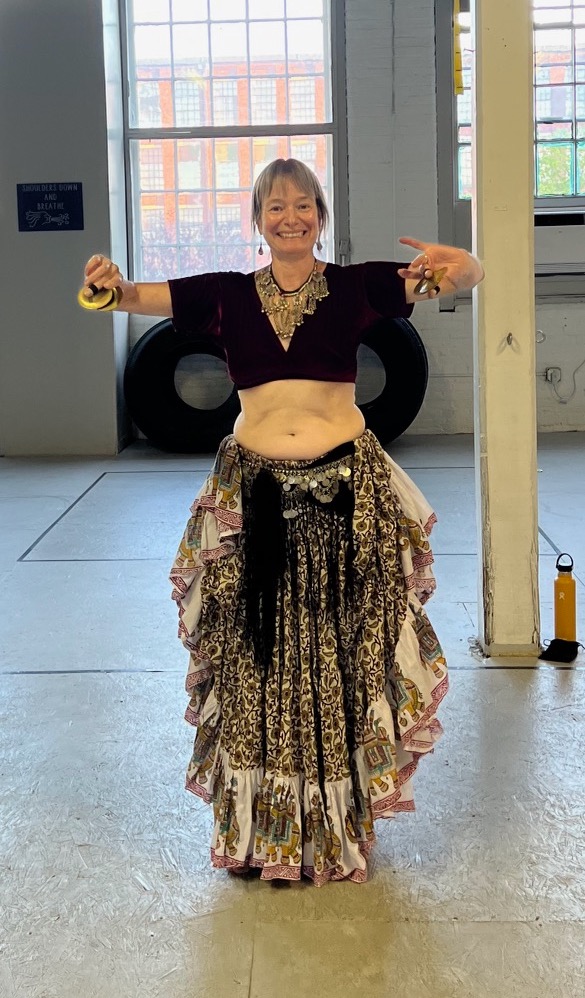 Maria, who is not a joiner, shocked me by joining the Beledi belly dancing troop, a small group of remarkable women in Bennington, Vt. who love dancing and take pride in their bodies.

It is, I learned, a coming out for strong, proud women.

It’s also about identity, friendship,  community, and support; the dancers are always there for one another, and the teachers are gentle and patient.

It was transformative for her, an instinctive but brilliant move. Her belly dancing group had been nothing but good for her, from the friends she had made to the things she had learned about herself. It was the beginning of her emergence from hiding, just like a moth coming out of its cocoon.

To her bewilderment, it was just what she needed, triggering the process of learning who she is and wants to be. If anyone had told me when I met Maria that she would like to be a belly dancer, I would have laughed.

But somehow, deep inside, she heard a call and answered. It took a lot of courage and trust.

Maria was shy and hidden when I met her; in a way, her true self had been hidden for years. In the Beledi group, she instantly respected and identified with the other dancers and was at ease with the teachers and never felt ridiculed or made to feel incompetent.

She and I always saw through the barriers and into the souls of one another from the first. I knew belly dancing was suitable for her, just as she did. It turned out to be so much better than I thought it would.

One thing about belly dancing – it is not easy. Maria has worked hard; the classes can be rigorous, and there is a lot of practice and those fabulous and mystical outfits. She staggers home from the classes and is in bed sleeping in minutes.

She loves every minute of it. The first thing I said after she joined was, “this is who you really are!” It was a wonderful thing to see. She is still trying to figure it out.

Belly dancing is not just a dance. It’s a state of mind, a sense of self, an affirmation of identity. Maria can’t yet figure out why she was and is so drawn to it.

But I can see why. Just look at that smile in the photo.

You can see it in this picture, taken by her teacher Julz, her belly, right out there for the world to see,  a proud testament to her ascending pride, confidence, and strength. I don’t think I have the guts to do it.

I didn’t see Maria’s belly for the longest time after we married. It wasn’t something she wanted to show anyone.

Women who don’t look like Vogue models and Hollywood stars are often made to be ashamed of the way they look. Not belly dancers. The dancing is an antidote; the dancers are proud and full of attitude.

In August, she and the Beledi dancers will perform at the Bennington Art Museum. I will get the chance to see her dance with the group after her five intense years of learning and practicing.

Men are welcome to join the group but are not especially welcome to observe the classes and practices. I rarely get to see her dance, but I hear about it all the time.

Belly dancing has been good for Maria, more so than I would have imagined.

Her excellent teacher Julz Irons took this photo last night at the dancing class to show Maria how far she has come and how great she is doing. I’m proud and happy to share it with you.